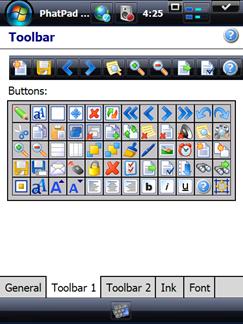 In today’s Pocket PC world it is still the norm for one to purchase software to supplement or replace the default windows applications. This is still very true for the “Notes” software provided by Microsoft. This is where Phatpad comes in. This software “is an advanced notes organizer for Microsoft Windows Powered Pocket PCs. It allows you to draw pictures, jot text notes, or put a mixture of pictures and typed text on a virtual scratch pad”.

This is a quote from the manufacturer and as we all know, that has to be proven.

Above is an image of the view you get when you open a file in Phatpad. This is a very similar setup to the Microsoft Default Notes program. I would view this as positive as users do not have to drastically adjust to a new setup. One thing I noticed straight away about the new PhatPad 4.0 is the crisp clear picture when one is in drawing mode. This was a pull for me as I had been used to the rather pixilated Note’s brushstrokes. This was a very impressive feature for a program that was created for simply taking down notes and for making quick sketches; I feel that the clear graphics are quite comparable to current leading paint software (even though PhatPad is limited in this). 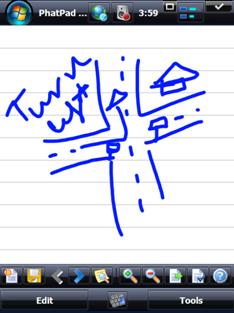 Yet again the new PhatPad 4.0 passes the “map drawing test”. With great ease I was able to create a simple map with great accuracy using the stylus. The great graphics not only served a purpose of vividly expressing the map but it also kept me admiring my VGA screen for a moment. I would have never said this about any of my rugged drawings, but PhatPad’s impressive graphics seemed to bring my image to “life”. 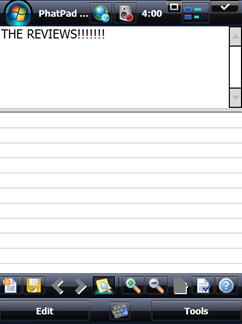 The memo mode is a rather exciting feature as this is a new feature which allows you to type a memo explaining a note or a drawing that you would have made. For example; have you ever written something down and totally forgot why; have you drawn a map and forgot why you drew it is the first place? Well the memo mode solves the dilemma. This shows that PhatWare is pushing for a more comprehensive PhatPad than previous versions, which were merely simple improvement’s from Microsoft’s Notes application. 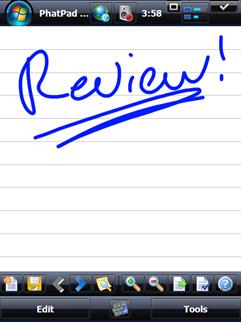 Above is an illustration of a rather distorted doodle I made earlier which emphasizes the rich color and clear graphics provided by the software. Even when the stylus stroke curves it is very hard to notice pixels “sticking” out of the image; it’s completely smooth. 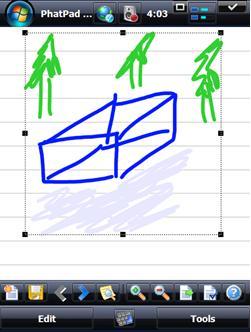 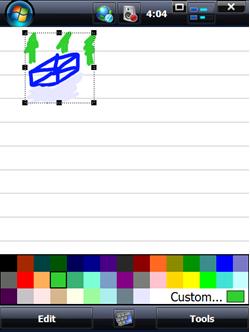 To the left is an illustration of a new and exciting feature. PhatPad gives you the ability to select an image that you have drawn and to resize it by dragging the corners. It is even possible to drag an image around the page and place it in a completely different position. This feature for me shows an advancing Pocket PC software market; currently the default Microsoft word software is unable to allow as much freedom in image use, therefore showing yet again that PhatPad is no longer just a simple note jotting software application, but one which has evolved to offer more advanced features. 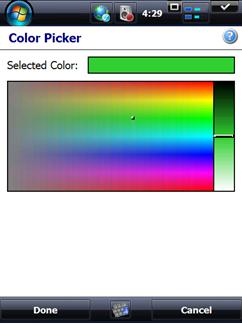 One could ask the question; “what are great graphics without a great color selection”; well, PhatWare pushed even further with their innovations. Even though this is not a ground breaking feature it is definitely one to adore. For a note taking application, this is simply luxury as this is a feature one would expect an advanced paint program to have. The usability of the color picker is quite easy; dragging the stylus changes the shade until one reaches the desired color. The dragging is smooth and is slow enough for one to reach their color selection. 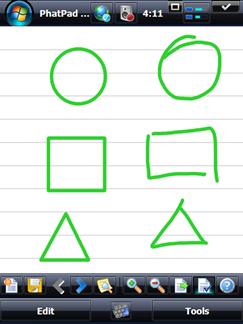 PhatPad’s new shape recognition software certainly makes it shine. The software is able to convert my messy shapes into perfect, right edged shapes. The software is also able to recognize circles but it took me a while to create a circle that the software could recognize. As you can see in the screenshot I had to create an almost perfect circle before the software recognized it. Nevertheless the shape recognizer is a new innovation thence all we can expect is an “evolution” rather than a perfect creation the first time. Even so I would still hint out that the usability of this feature is a bit fiddly. It took over 15 minutes for me to figure it out…I guess it was the software rather than myself as that would be disturbing. 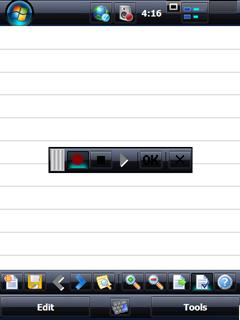 PhatPad still retains its voice recorder, which in my opinion is not special at all; but yet again it is an addition to a great program.

The PhatPad toolbar is another feature to behold. The comprehensive toolbar allows for easy access to those crucial functions. The best thing about it is the customizability of the toolbar depending on what features one uses most of the time. 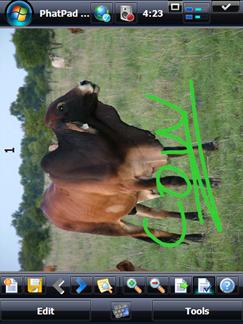 PhatPad also has the ability to put a background on a document. This means that you have the ability to upload an image and comment on it as I did with the image on the left. This is a feature that could be useful for the more ardent note takers who not only want to take notes, but to take aesthetically pleasing notes.

PhatPad is a powerful application which truly pushes the line for future developers. PhatWare has truly raised the standard which many other developers will hopefully follow. With such great strides come usability difficulties, which I experienced. The software was quite hard to figure out and to use effectively but as I used it the second and third time I soon got the hang of it. If I was to rate PhatWare, I would give it a 10 for it’s plethora of features, 7 for user friendliness and 10 for its great innovations!