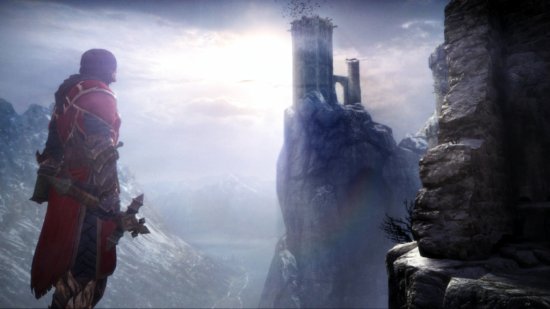 Castlevania: Lords of Shadow is the latest descendant in a legendary multi-platform game series dating back to the 1980s. Does the newest heir live up to the Belmont legacy?

Castlevania: Lords of Shadow is a 3D action/adventure game by Konami for the Playstation 3 and Xbox 360. Historically, forays into 3D have not turned out well for Castlevania, with Castlevania 64 and its sequel generally seen as inadequate installments into the series, but Lords of Shadow is very different. Here’s what stuck out to me.

+ The visuals in Castlevania: Lords of Shadow are incredible, easily some of the best I’ve ever seen on a console. The art team clearly put an absolute ton of effort into making this game both graphically impressive and artistically unique. The sheer amount of detail, from the articulation of the random statues and works of art strewn about the world and its locales to the intricacy of the distant places you can see in the distance, is impressive and mind-blowing. There’s an art gallery you can purchase images from with in-game experience and it’s one of the few such galleries where I actually felt compelled to do so. Where games like Just Cause 2 and God of War 3 look impressive because they’re shiny and explosive, Lords of Shadow shines because its art is well developed, complex, and utterly deep. I could write this entire review on the artwork. 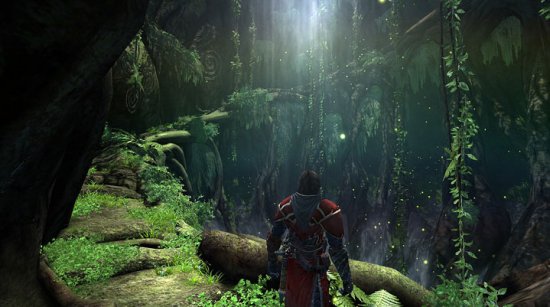 + Music. The soundtrack is an epic score that gracefully covers both the melancholy moments and the pulse-pounding boss fights. It’s the type of orchestral music where you feel its effects without actively noticing the music itself, but if you do pay attention to it you can hear that it’s indeed quite good.

+ The voiceovers are excellent all around. Patrick Stewart immediately stands out as a recognizable voice for Zobek, who is also the narrator between chapters, but the rest of the voice cast does a stellar job. Gabriel, the main character, has a unique Scottish (correct me if I’m wrong on that one) accent that makes his voice sound different from every run of the mill protagonist in action games nowadays. Sometimes the script itself is too melodramatic or bland, but the voice actors universally do a great job delivering it. I was particularly fond of Pan; I swear I could listen to his character read a dictionary and I’d be enthralled.

+ The game’s overall character, from the storyline (which is admittedly mediocre at best in the very beginning, but it builds into something quite good, I promise!) to the artistic style, the sense of scale created by the environments you get to explore, the sweeping orchestral score, the unique voiceovers, and the astoundingly deep world-building and mythology that could easily be overlooked, is something very special. Castlevania: Lords of Shadow certainly has a distinct personality that is unquestionably its own, even wildly different at times from any other Castlevania game to date. It’s really a beautiful thing, like watching a masterfully directed movie.

+ I thought combat was, for the most part, pretty enjoyable. While I loved experiencing more of the unique world in Lords of Shadow as I got to explore, I definitely did enjoy beating the snot out of the next supernatural terror to make the mistake of getting in my way. There’s an interesting magic and special moves system that rewards blocking, dodging, fighting without getting hit, and overall good timing, a health recovery system that is inextricably linked to performing well in combat, and some extremely cool special moves you can eventually start to pull off. At its best, combat in Castlevania: Lords of Shadow can be a beautiful thing.

– Repetition. To some degree, the game repeats itself quite a bit. The exploration elements are always similar and involve some combination of running into invisible walls all over the place, finding a shining, perfectly geometric edge to grab onto, and then climbing and shimmying either up or down to explore the area and eventually reach your next linear destination. Sometimes it feels new and exciting, but there are definitely times when you’ll find yourself wishing you didn’t have to climb another ledge.

– Text size. Maybe it’s just because I didn’t play it on a high-definition television with top of the line cables, but the text size and font choices in this game are some of the worst I’ve ever seen, beaten only in unreadability by other games in the genre. It was so bad that the end credits actually showed up in rainbow colors instead of white text. I’ve noticed that this is a major trend in PS3 games and I wish that devs would realize that not everyone plays in high definition. At least include an option to enlarge the font size, maybe?

– Near-plagiarism. There are exactly three fights (the frozen lake, the last titan, and the necrolich dragon) where, if I didn’t know that I was playing Castlevania: Lords of Shadow, I swear I could’ve been playing a dumbed-down version of Shadow of the Colossus with incredible graphics. At other points, I swore that the combat was like God of War 3 (it is, but only up to a point. When you start getting more and more special moves and secondary items, it diverges significantly). Then, much of the time when I was climbing around exploring things, I might as well have been playing somewhere in the beginning of Prince of Persia: The Forgotten Sands where you can jump around but you don’t have any cool magic or time powers. If you look at any of these samples of the game independently, the resemblances to these games are remarkable. Luckily, it’s a package deal and Castlevania: Lords of Shadow does manage to make the overall experience a unique one.

– The double jump. I waited for most of the game to earn the coveted double jump, mostly because I found that the platforming and exploration was starting to feel repetitive but partially because I was taunted early on with a weapon upgrade that definitely required the double jump to reach it. However, once I got this unquestionably awesome-looking power (angelic wings shine from your shoulders when you use it, a la God of War 3 but way cooler), I wanted to get rid of it. From the point in the game where you get it until the game is over, platform after platform and puzzle after puzzle require you to not only use it, but to use it with a greater degree of precision than is really reasonable.

Some instances require you to sprint, activated by double-tapping the analog stick in one direction (an action infuriating in its own regard. Who requires a double tap to an analog stick? It would be a different story if we were talking about a d-pad…), jump at precisely the right moment, and then double jump at the absolute apex of your first jump. Failure results in either dying and respawning immediately at the point where you initially jumped (most deaths mercifully cause this and a little bit of damage to your health) to dying, waiting through the lengthy load screen, and having to start at the most recent checkpoint (which could mean fighting through a tough battle a second time, completing other difficult jumps again, etc. etc.). By the time I reached the music box levels, I was seriously considering throwing the controller through the television and hurling the PS3 itself out the nearest window.

– The music box and the clocktower levels. These were like a punishment for making it mostly through the game, not a series of fun puzzles. I understood the puzzles. The puzzles are actually all kind of easy, I thought, though I’m usually pretty good at puzzles, so take that with a grain of salt, but executing them is an entirely different matter. The music box level in particular was infuriating, not even enjoyable in the least bit.

– Chupacabras. You never get to kill any of these little monsters, yet they show up 3-4 times throughout the game to steal all of your cool powers and relics temporarily, making life miserable for you. It isn’t fun; it’s annoying.

I really liked Castlevania: Lords of Shadow, for all of its strengths and weaknesses. It’s a cerebral gamer’s action/adventure game, pairing fairly standard yet well-refined combat with a unique, artistic world and throwing in more than a few puzzles to make your brain keep pace with your thumbs. When aspects of this game are well done, they are extremely well done. When they falter, it’s only so noticeable because other elements of this game are just so good. The first few hours are melodramatic and a bit run of the mill, no better or worse than your next random action game, but ultimately Castlevania: Lords of Shadow really is a truly memorable gaming experience. If you can look past the flaws, it’s at least worth a week’s rental, a purchase if you like reliving that movie-like experience, getting every upgrade there is to get, finding all of the Easter eggs, and getting crushed on the harder difficulties. Beyond that, there is also downloadable content being released in February and April that expands upon the story of some of the characters and promises to extend the bewildering, bizarre epilogue. 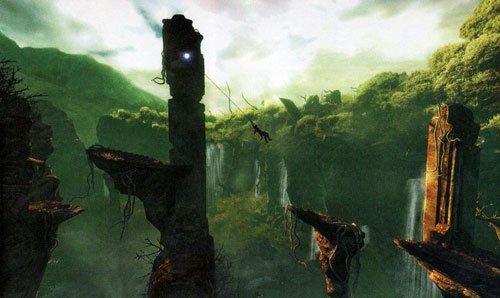