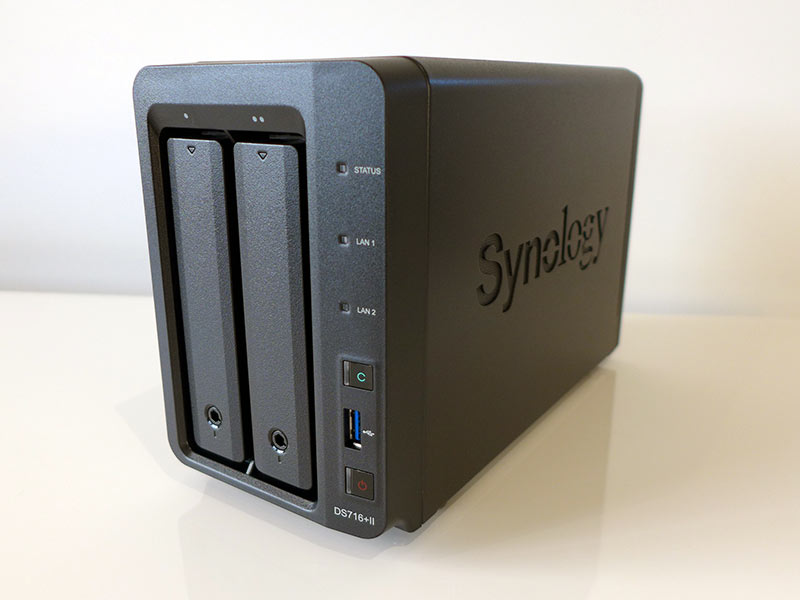 So obviously, we chose to focus on the DS716+II as a remote photo back-up device.

Read on for our long distance review.

Over the years, we have reviewed a number of Synology NAS devices and have covered the many uses these devices have. The hardware is matched by a polished DSM web interface which includes an iTunesesque Package Center allowing users to expand and enhance functionality by installing downloadable packages. From media and mail servers right through to surveillance camera administration, the Package Center makes Synology NAS devices like the DS716+II incredibly versatile. 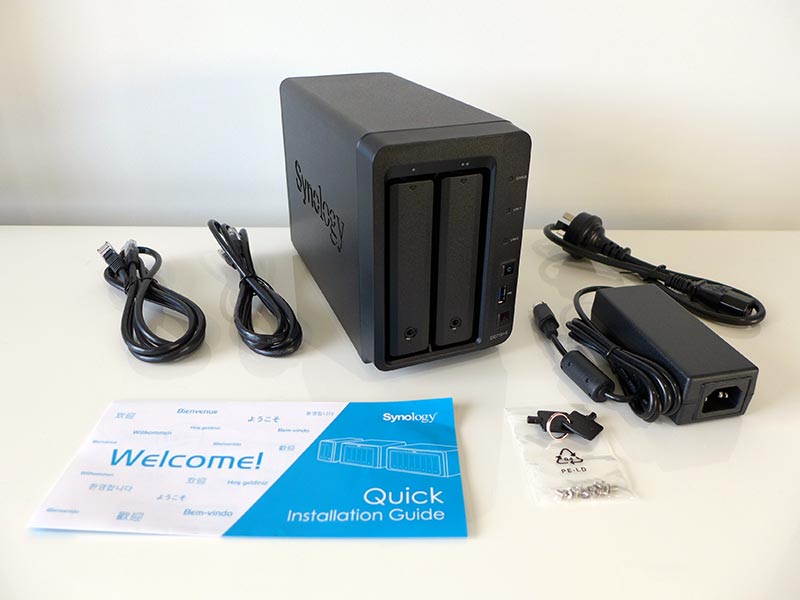 Despite this, for this review we have decided to focus on one particular application: Remote photo storage. The idea germinated while we were trying to find a modern solution to storing and backing-up photos taken whilst travelling overseas. What if instead of dragging around multiple SD cards or a portable hard drive to store back-ups, we regularly transferred the photos over the Internet to a NAS device back home?

The plan, in a nutshell was that each night of our stay in the United States we would use an inexpensive Lenovo Chromebook 100S to upload the photos (all our hotel stays included free wifi) direct from the SD card to our DS716+II back in Australia.

The DS716+II comes equiped with two CAT5E Ethernet cables, a Quick Installation Guide, a power brick and cable, a small bag of screws (for portable drive mounting) and a set of security keys. The DS716+II itself is a relatively small unit, measuring 157mm high, 103.5mm wide and 232mm deep. The front is dominated by its two drive bays (featuring Synology’s ingenious screwless mounting system) and various variable brightness LEDs. Along with a front facing USB 3.0 port, the front of the DS716+II features a power button as well as a handy USB Copy button.

The rear of the unit features two USB ports, two Gigabit Ethernet ports, an eSATA port along with a Kensington lock slot, reset pinhole and a power receptacle. Above these ports is a 92mm variable speed exhaust fan. 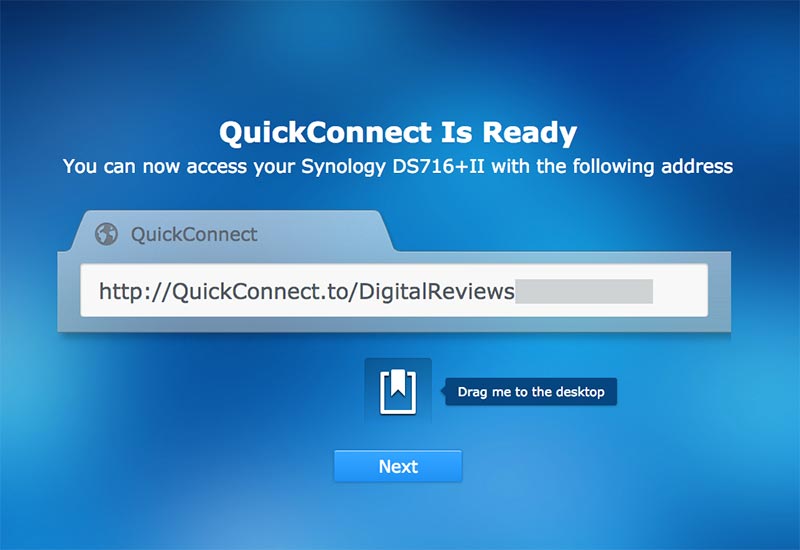 Once unboxed, we populated the DS716+II’s two drive bays with 4GB Western Digital Red drives and connected the unit to our Gigabit network. Our network connection to the Internet is via ADSL2+ with a reliable 10Mbit downstream speed. All connections are connected via CAT6 Ethernet cable routed by an old Netgear DGND3700 via a HP Procurve Gigabit switch. Also worth noting is that the local network the DS716II+ would be connected to during our trip would be live with other users online both uploading and downloading at any given time.

Once connected, we opened a browser window on our MacBook Pro and accessed find.synology.com. After a beat, the DS716+II popped up, allowing us to quickly work through the web assistant setup wizard. Worth noting is that as the two 4TB drives we were using for testing had come straight out of another two bay DiskStation, the Web Assistant was happy to migrate the drives (keeping the content and most of the settings intact) over to the DS716+II. While we opted for a clean installation, we were impressed to note that the RAID 1 content of the drives remained intact. Installing the DSM (Disk Station Manager) operating system via the Web Assistant took approximately 20 minutes from start to finish. 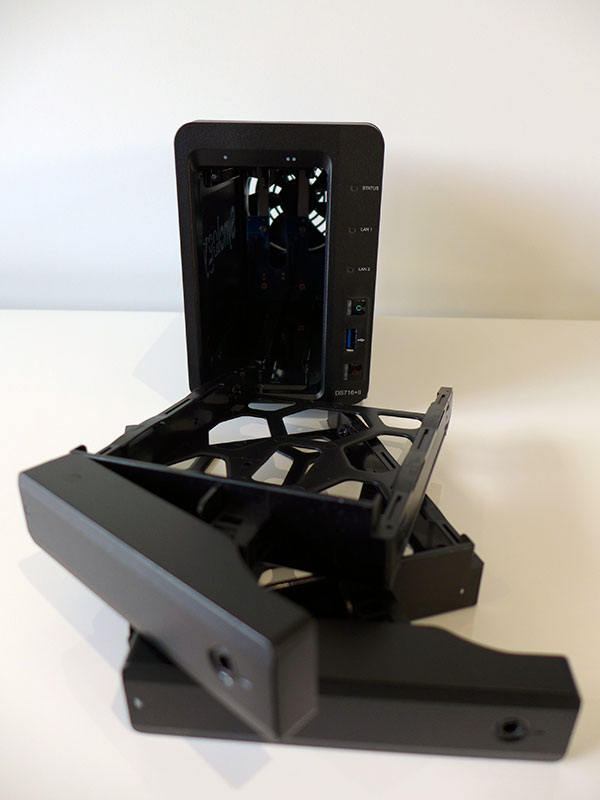 While we were impressed by the retention of data between hardware, prior to testing, we proceeded to wipe the drives using the DSM’s Storage Manager to perform an “Erase All Data” followed by once again updating to the latest DSM 6 operating system.

Initially, we were a little daunted by the notion of setting up the DS716+II so it can be accessed from outside its local network – We still remember the days of Dynamic DNS, opening ports and much ripping out of ones own hair – but thankfully, in 2016 Synology has made this process completely pain free.

Synology’s solution to remote network access is aptly named Quick Connect. Setting up a Quick Connect ID is as simple as choosing a unique alphanumeric ID and entering your Synology account details. Within seconds we were in possession of a URL that allowed our DiskStation to be accessible globally. Literally, seconds.

To complete the setup, we used the DSM Storage Manager’s Volume Creation Wizard to create a RAID 1 mirrored array using the new Btrfs file system. Synology recommends this new file system as it supports shared folder snapshots and replication, shared folder quotas, advanced data integrity protection and Docker DSM. These technologies didn’t matter for our test but its worth noting that like Apple and its next generation APFS, Synology is also incorporating new file system technologies in its products. 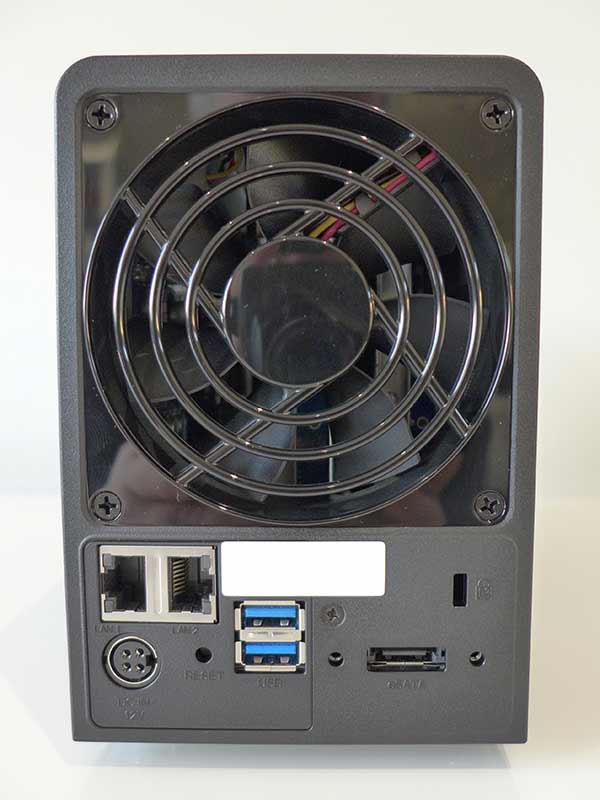 Our two 4TB drives when mirrored in a RAID 1 array left us with 4TB (3.64TB depending on how you count) of drive space for our holiday snaps which would be more than adequate to store all our 20 megapixel JPEG photographs from our nine day junket.

The DS716+II remained switched on and connected to our local network throughout for the duration of our trip, patiently waiting for us to access it from overseas. Worth noting is that the DS716+II is very economical on power, using just 19.14W while being accessed and 9.5W while the hard disk drives are in hibernation.

Our nine day trip from Australia to the United States had us stay at three locations on the West Coast: Venice Beach, CA; Las Vegas, NV and La Jolla, CA. At each location we used our Chromebook to transfer whatever photos we took from the day before to our DS716+II in Australia.

To accomplish this task, we decided to use the built in DSM web interface’s file manager to simply drag and drop files directly from our built in SD card reader. Easy. 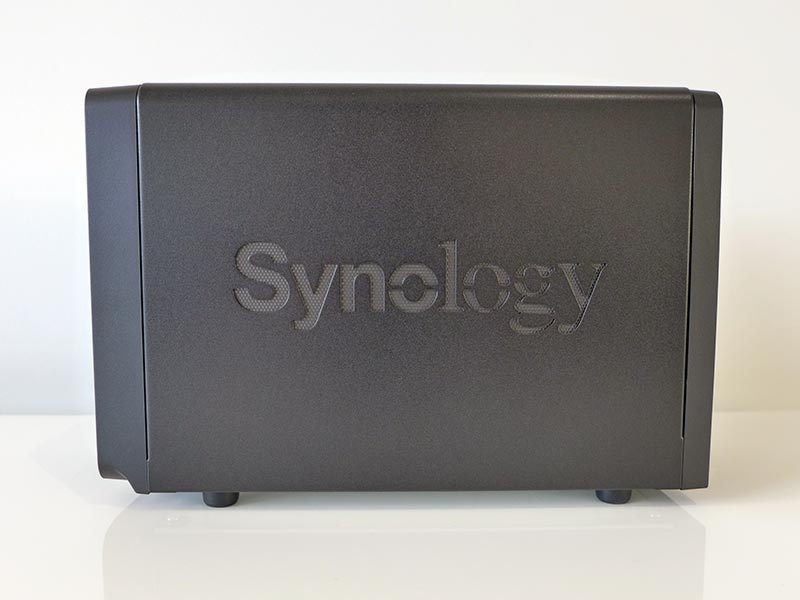 The hotel at our first destination at Venice Beach reported a Wifi speed of just over 5.5Mbps. We typed in the Quick Connect ID link and after a few seconds much to our relief, up popped up the DS716+II familiar login screen.

From our first overnight stay at Venice Beach, we found our two hundred odd 20 Megapixel JPG photos (Typically 5-7MB) uploaded in a few hours without any complications. We did however, quickly learn that accidentally using the Chromebook’s go back swipe gesture (or closing the browser window) killed the file transfer. Interestingly, the DSM File Manager was clever enough to allow us to right click on any failed transfers and quickly restart them by tacking them onto the back of the transfer queue. 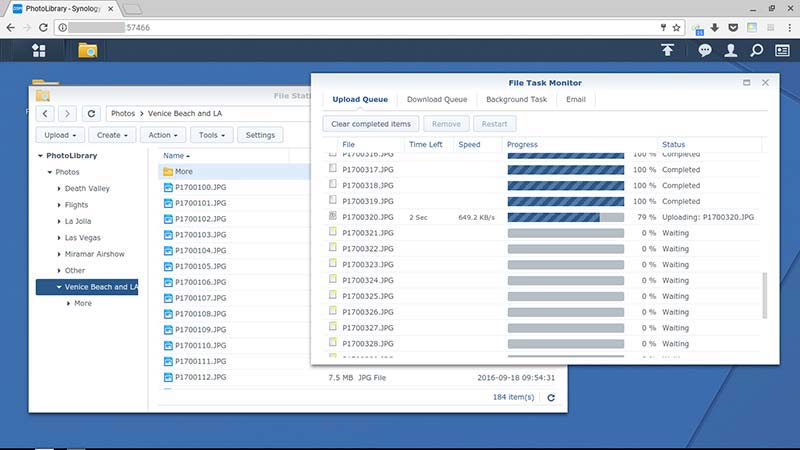 So far so good. Second stop: Sin City. While the hotel’s Internet speed was not listed in our paperwork, we noticed it was quicker than our previous location. We transferred another 200 odd photos but this time did so in well under an hour, again without any complications. Easy. 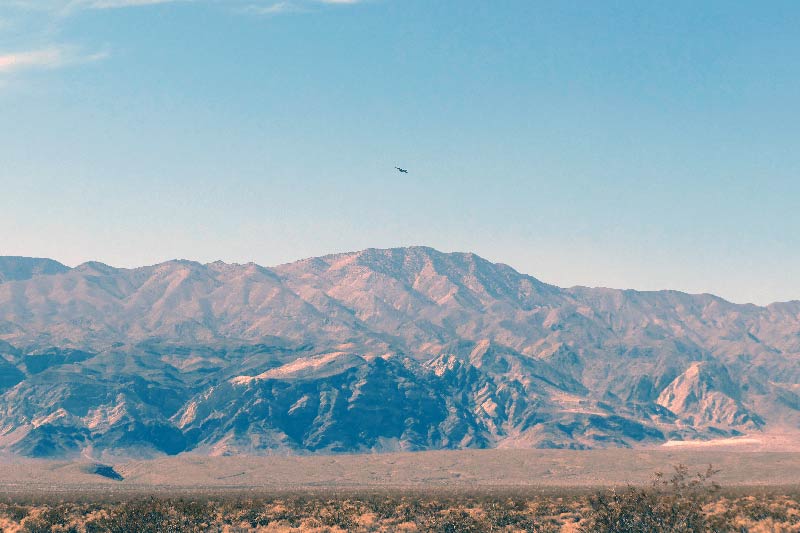 For our third stop we were once again in California at La Jolla. Unfortunately here is where our experience took a downturn. The wifi connection at the hotel we stayed at was very poor and we suffered constant drop outs resulting in interrupted and unfulfilled file transfers. While we were able to connect to the DS716+II via the hotel network, we were unable to sustain a connection to transfer files and on the odd occasion when we did, the speeds were woeful, resulting in up to five minutes per (5-7MB) file transfer!

After two nights of our four night stay in La Jolla we actually gave up on utilising the Hotel wifi to do any transfer due to the slow speeds and poor reliability. Obviously, we could’ve hit up some free wifi hotspots around town to do the transfers or even purchased a local data SIM card but these were outside of the scope of our test. 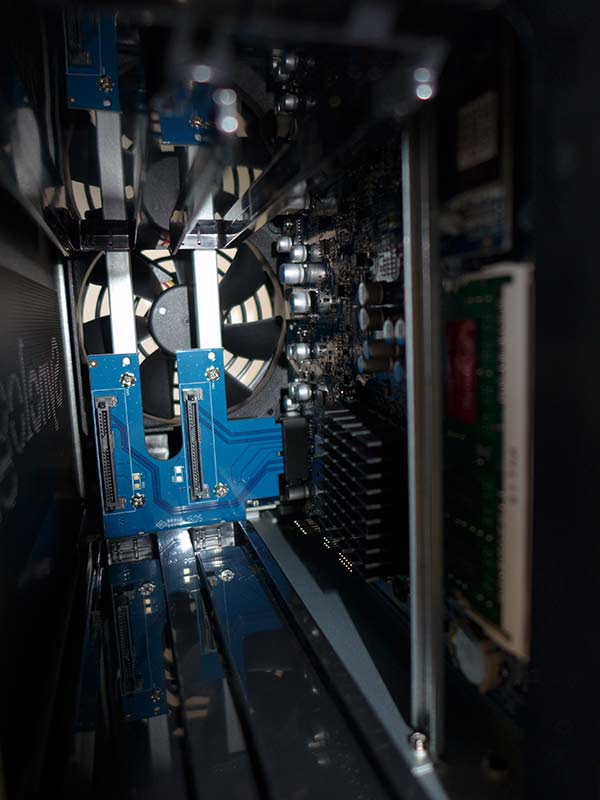 So what have we learned. Firstly, the DS716+II is more than capable, reliable and easy to use to undertake remote photograph storage when connected to a network via an ADSL2+ Internet connection. The problem lies in the speeds and reliability of the overseas connections. While two out of three hotels we stayed at had reasonable speeds, we were unable to transfer photos for the last four days of our trip due to poor wifi speeds/reliability. Luckily we had a suitably large card so that we could continue taking photos just without the safety of a back-up.

We should also note that while we have specifically looked at the remote storage and retrieval of data (specifically photos), the DS716+II could similarly serve these photos out to the Internet also utilising the free DS Photo Station package. This package allows photos uploaded to Synology NAS devices to create an online photo or video album that can be accessed remotely and securely. While we did not have an opportunity to play with this package, more information about this functionality (and other available packages) can be seen here. 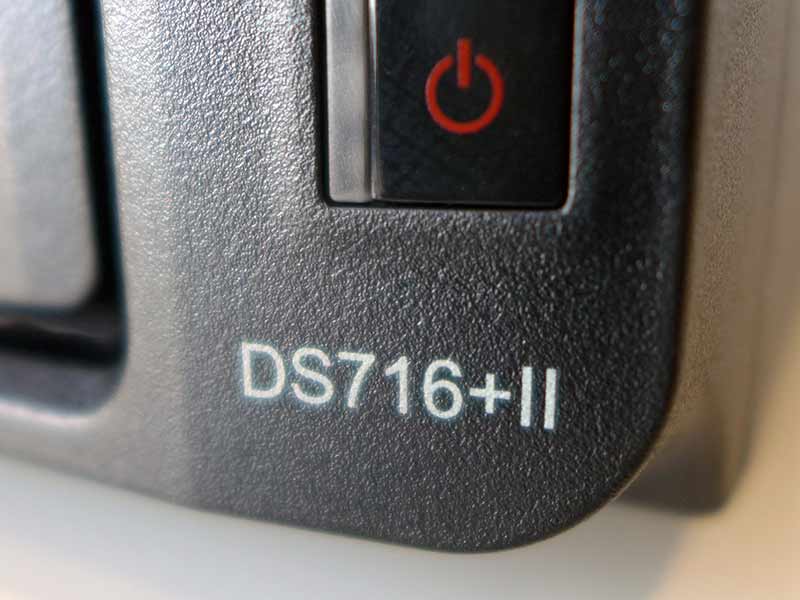 While our test wasn’t completely successful – the quality of the La Jolla hotel really let us down – the concept proved workable and given reasonable network access, using a Synology DiskStation such as the DS716+II is a great way to secure and store and back-up your photos while abroad.

The DS716+II has a street price of just over $600AUD and is available now. For more details, please visit Synology’s product page.