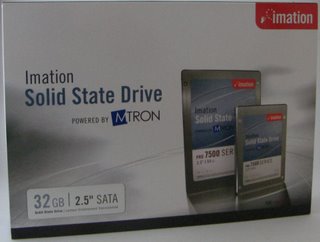 Imation and MTRON are arguably some of the key players when it comes to high quality memory.
With the market rapidly moving to solid-state drives we are today reviewing their latest entry into the enterprise market: the Imation MTRON PRO7500.  This SSD unit is aiming high with a claimed maximum read speed of 130MB/sec and an equally impressive write speed of 120MB/s.
How did the PRO7500 fare in our tests?

Let’s have an initial look at what is the hottest property for computer systems today.

Background
As SSDs become more ubiquitous and dropping in price fairly fast you might ask yourself the question: how soon will it be before they are equal in price to standard HDDs?  That is probably the wrong question to ask but in my opinion the answer is probably: not in a while yet.
What is important is to recognize that there is still a huge discrepancy between capacities of the two media, resulting in also a significant difference in pricing structure.  Early adopters are blazing the trail here again and there are plenty of people willing to sacrifice capacity for speed.  In my case the hard drive has always been the bottleneck on my notebook.  Even though it’s not ideal, I would be willing to substitute a decent hard drive for a much lower capacity SSD — if, and only if the increased speed makes up for it.
How low can you go when it comes to capacity?  32GB is the absolute minimum for a Windows machine.128GB is quite workable.  If you decide to go for a very low capacity SSD you probably need to find a place for all your data elsewhere.  There are several solutions available: you can invest in a high-capacity CF card or USB stick.  Networked storage is another option but one of the more interesting possibilities is to replace the optical drive with a standard hard drive through a caddy system.  We will be testing that shortly in a separate review.  Again, it is not an ideal situation until the capacity of SSDs come close to the level of modern-day HDDs and are matched by an affordable price.  That is slowly starting to happen with many players bringing the price down. 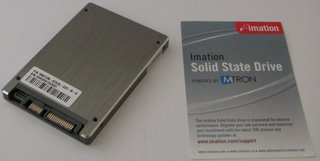 Where does the PRO7500 product line sit in the price scenario?
You might be put off if I told you the price now as the PRO 7500 requires a significant investment.
It is not a typical end-user product but geared toward the server market in particular. They regard it as an ideal solution for enterprise, corporate and IT infrastructure applications with extreme performance needs such as high-performance storage arrays, database servers, Web servers and other network appliances.
That does not mean that it would not work on a typical notebook and in our testing we have done exactly that in addition to testing it in a high-performance 64-bit Vista environment.  In order to eke out the best performance it also has to be a SATA-II connection.  One of our notebooks is an ASUS V1J with only a SATA-I drive but even here it works flawlessly, albeit a bit slower.

The MTRON line of SSDs are sold by Imation under the same model number designation.

Knowing that these prices carry a huge premium compared to what’s out there in the market, there’s something you need to know and yes, it has to do with apples and oranges… 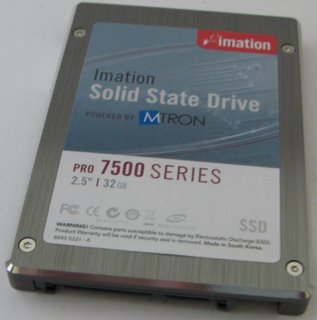 The Benefits of SSDs

The immediate benefits of using SSDs are obvious: there are no motors or moving parts and with reduced heat and noise generation you will have longer battery life in notebooks as well.  SSDs provide faster  (virtually no seek time) and more reliable data storage than traditional HDDs.
Let’s talk about some of these benefits.
One particular benchmark report noted a surprising result when it came to heat generation: the SSD in idle state was much hotter than a similar idle HDD in the same surrounds.  We had no such experience and the solid-state drive never became hot.  Earlier reports about SSDs also mentioned the rather lacklustre performance of many drives.  That can certainly not be said about the PRO7500. They are blisteringly fast!  Another good indication of these products being more reliable you’ll notice with the warranty of five years!  With the quoted mean time between failures (MTBF) of one million hours, we were not about to challenge them on that point…
For me the fact that these units are used in harsh environments because of their rugged solid state design and being highly resistant to shock and temperature extremes, is enough assurance that your data is safe for a long time.

It is easy to go for the cheapest SSD modules on the market.  It could be a mistake if you run drive-intensive applications and need high-speed read and write transfers that can be sustained.  Cheaper SSDs usually contain single-level cell (SLC) as opposed to multi-level cell (MLC) NAND flash memory which will give significant enhancement in read/write performance and endurance.
SLC (Single-Level Cell) and MLC (Multi-Level Cell) are both NAND-based non-volatile memory technologies. MLC allows each storage cell to store 2 bits of information whilst SLC only allows 1. This means that MLC drives have one main advantage – compared to a similar SLC drive they will be cheaper due to the fewer flash devices needed (i.e. lower flash density).
SLC NAND flash is superior in a number of ways. It provides an enhanced level of performance in the form of faster read/write speeds. Due to the fact that SLC stores only one bit per cell, the chances or errors are greatly reduced. MLC flash requires 4 bit ECC whereas SLC only requires 2 bit ECC. As it happens, Mtron use 7 bit ECC – so the chances of error are even more reduced. Lastly, the endurance of SLC flash is far higher than MLC flash (10 times as many write cycles).

We tested the Pro7500 in various configurations and on diverse platforms.
We even checked out 2x SSD in RAID0 configuration. That gave about 15% – 30% increase in performance but also a 5sec to 8sec increase in boot time due to the RAID controller BIOS setup every time time you boot…
That means that I’d probably not recommend RAID0 for SSD, unless you’re doing it just to double the HDD size.  We also noticed that our systems consumed on average about 5 watts of power less when equipped with SSDs. And that’s a very good thing when it comes to battery life on note- and netbooks!

Have a look at some of the screenshots below if you’re interested in how exactly the 7500 performed in our test setups.

SSDs are the next major enhancements in computing. There’s no doubt that in, say, five years time few notebooks will be sold with standard HDDs. Capacities of the solid state drives will have increased to substantial levels and prices will have come down to today’s HDD drives. Is that the demise of the traditional rotating drive? Not by a long shot! But, ultimately, they will go the way of the film camera: I’ve got plenty of high quality “analogue” cameras in my cupboard that have been replaced by digital equivalents. Anything that is more reliable, quieter, faster and ultimately, cheaper will win out.

MTRON have shown us what to expect when it comes to speed and reliability. The Pro7500 technology, whilst clearly aimed at the high end of the market (industrial and mission-critical applications that require high reliability and performance) for now, will trickle down to Joe Consumer before long. I can’t wait for further developments, based on the MTRON platform that will be unleashed by Imation in the coming months. Stay tuned: we’ll cover those announcements too…

A solid 8 out of 10 (price being the only barrier to a higher score).