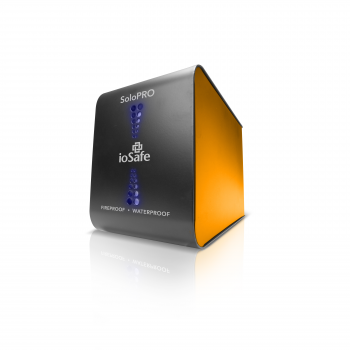 The latest and fastest member of the ioSafe family of tough guys landed on our desk today. Weighing in at 15 pounds (for just 1 hard drive!) you get the distinct impression that this baby gorilla will stand its ground no matter what life throws at it: come hail or flood, fire or brimstone! Brimstone? Haven’t seen that in any natural disasters lately but it may be on the cards yet… Anyway, the SoloPRO looks like one hefty, over-engineered, over-protective guardian of your irreplaceable data. Welcome to my office, black beast, and we’ll see how good you really are.

OK. This is the plan.
The ioSafe range is claimed to be fireproof and waterproof so we’ll test that by loading up the SoloPRO with all our company’s data and family pictures, set fire to our office, let the brigades hose down the building, recover the black box and try out ioSafe’s free recovery service.

Wait! Hasn’t someone just done that? Inadvertently, of course but yes, the ioSafe has been through the trials of fire and baptisms of water quite a few times already. For an interesting read, see the stories at the end of this article.

Phew! That saves me quite a bit of hassle in the testing department!

So let’s focus on the reason for this prototype: the USB 3.0 speeds! Finally I have a device that I can hook up to the USB 3.0 port on my Core i7, SSD equipped notebook. That port had been lying dormant for way too long and has only been used for USB 2.0 connections. And SSDs being what they are: speedy but lacking in capacity, this 1TB HDD from ioSafe will give me both speed and capacity plus protection against natural and manmade disasters! As a result, I’m willing to put up with its industrial appearance. Let’s not mince words here: the thing is so heavy that you should have it on the floor where no one can see it. Interestingly, it does have a tab on the bottom where you can bolt it to the floor with! Like a real safe, containing valuables. Which is indeed the case. And it’s probably wise to have it on the floor as last year our ground floor offices were flooded and we lost about 10 grand worth of gear that had been on the floor! All insured of course but still a lot of hassle and inconvenience. So this black “beauty” will be permanently “grounded”. I don’t think I will bother with the bolts though – the ioSafe is heavy enough that any thief will think twice! And a Kensington lock or padlock will do the trick as well. 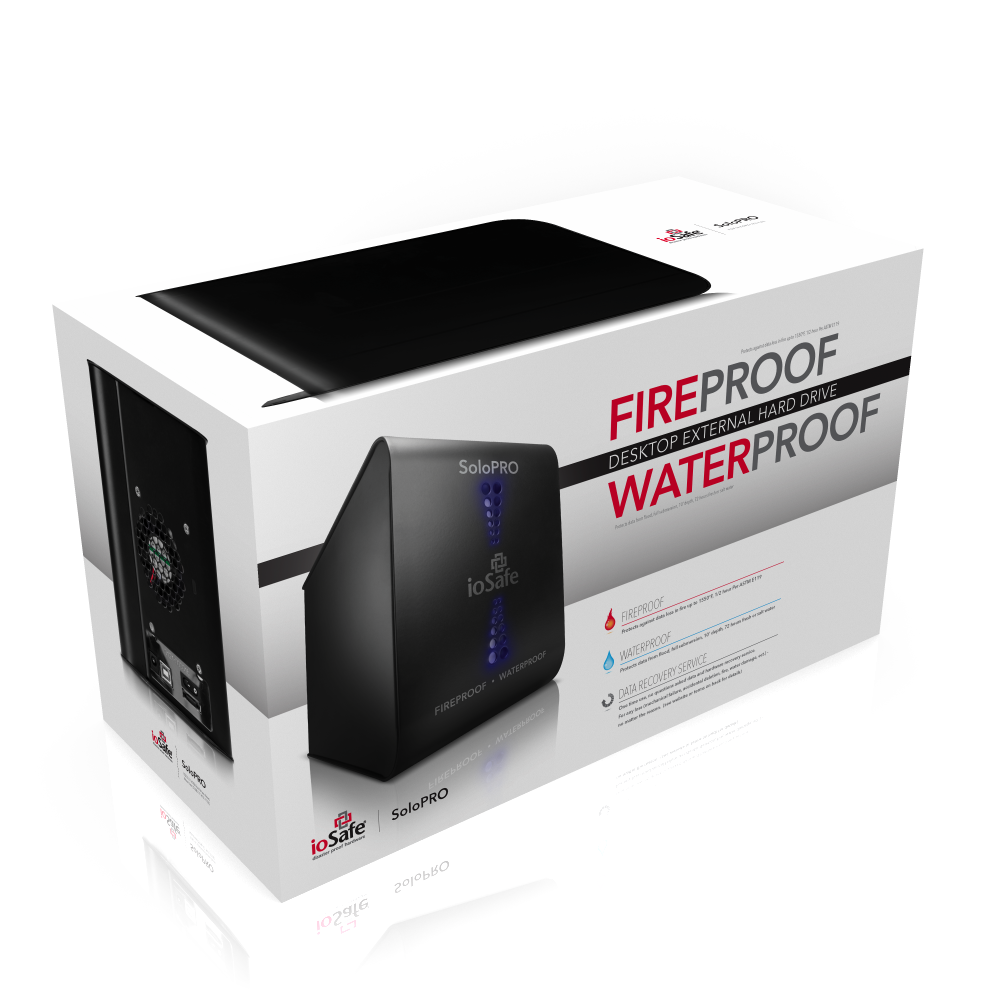 Installation
This is a pre-production unit of the SoloPRO USB 3.0 that is announced today. As such it did not come in a retail box as they were finalizing the design of the box at the time of this review. When I unpacked the unit I noticed a small amount of fine white powder on the black case. Anthrax? Unlikely. And then I read the yellow notice to the effect that this came from the fireproof insulation during shipment…  A quick wipe and she’s clean again. There’s a power pack, USB 3.0 cable and a small User’s Manual.

The SoloPro displays its Fireproof and Waterproof capabilities proudly on the front so let’s look at what that means. The only thing it is not is Shockproof. Best not to kick your data around…

(ioSafe do have an SSD model that is indeed shockproof as well. I feel tempted to drop that black box out of my aircraft but doubt if I get permission from the authorities to send a mini meteorite down to earth…)

They have done Fire Endurance testing up to 1550 degrees Fahrenheit for a full 30 minutes and Full Water immersion for 72 hours in both fresh and salt water. You might have to call upon ioSafe’s Disaster Response Team after any of these events and they can either help you in restoring the data yourself or you can ship it back to the factory. All purchasers have an automatic cover for these services for a full year and the option to extend it. A 3 or 5 year Data Recovery Service upgrade can be had for $50 & $100 respectively. You just need to make sure you activate the unit at www.iosafe.com within 7 days of purchase.

How Does it Protect your Data?
Have a look inside the unit. This will explain why the unit is waterproof despite the obvious vents in the front and back. 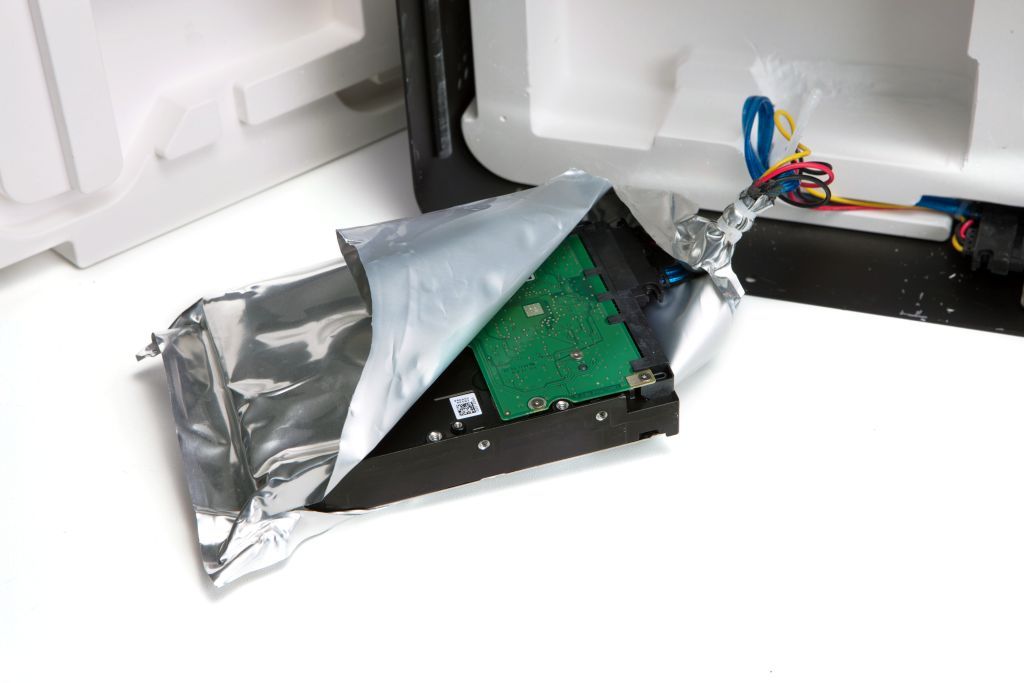 Inside the Black Box

Brett Callow, the PR Director of ioSafe, illuminated me on what we see here: “The actual drive is surrounded by a heat-conductive waterproof barrier. The white material you can see in the image is a special form of insulation that’s chemically bound with water. In a fire, the water steams away, cooling the drive within. Additionally, the steam exiting via the vents prevents hot air from entering.”

What about a “normal” HDD failure? Are the drives replaceable?

“No, the drives are not replaceable. Note, however, that should a unit be damaged for absolutely any reason – fire, flood, coffee spill, mechanical failure, whatever – during the DRS period, we’ll arrange for the unit to be returned, pull the data from it and send the copied data back on a brand new Solo at no cost whatsoever to the customer. “

If that doesn’t give you a good feeling about the safety and security as well as the recoverability of your data, nothing else will. I can’t wait to back up my entire notebook to THIS drive! So let’s do exactly that.

Testing
Plug in the power, USB cable next and feed it electrons with the switch on the back. The blue LEDs at the front flicker briefly and the unit presents itself ready as a New Volume with 931MB free.  I renamed the drive to ioSafe SoloPRO and did a full backup of my system. The SSD in my notebook contained an OS and a Data partition, totalling 77GB. That was transferred in just 14 minutes flat! Impressive.

The USB 3.0 has a nominal bandwidth of 5 Gigabits per second. The reality is less glorious as much depends on CPU, file system overload and a few other factors. So on average you can expect something in the order of 55 Megabytes per second, which is pretty decent. We did nearly double that at 90 MB/s on a clean Core i7 system with nothing else running. Next, I copied data from another external drive, connected to the laptop via USB 2.0. Naturally that took a whole lot longer: about an hour for 55GB. A small test file of 3GB was transferred from the SSD to the ioSafe in 45 secs and back again in 30 secs.

Any Gripes?
When the unit switches on it peaks to about 24 Watts and then settles down to a moderate 8 to10 Watts. However, it would be nice if it would power down automatically when the computer it is attached to is switched off. Particularly, now that I’ve consigned the unit to an out-of-sight location under my desk… It will go as low as 4 Watt on standby so it’s not as bad as feared at first.

I figured ioSafe would have a perfectly good reason for this so I asked Brett Callow again:

“The unit has been designed to not power completely down automatically. Due to the different ways operating systems and backup programs deal with external hard drives coming in and out of sleep mode, we’ve found that achieving a reliable backup to the host was a better trade-off.  Sometimes an operating system or backup program will time-out with an error if they have to wait too long for the drive to spool up from sleep – resulting in no data getting backed up. While we strive to make the Solo and SoloPRO as energy-efficient as possible, our first and primary goal is to protect people’s data.”

Conclusion
There are other options to secure your data. Online storage is one of them but I’ve never been in favour of them as I don’t trust my data to anyone else. And I don’t have a superfast, unlimited plan that would allow me to secure large amounts of data in the shortest possible time and cheaply.

Whilst the extra speed gained with this USB 3.0 model is a huge bonus for large databases, I don’t want to lose focus on what the ioSafe SoloPRO is really about: the best in data protection at a very affordable price! My guess is that even if the price was double the 250 bucks this 1 TB unit costs, you’d happily pay that amount if someone could restore all your vital data after a fire or flood!. I know I would…

So how do we rate this model?
Based on the ioSafe SoloPRO USB 3.0 strengths – in this case its literal strengths of being fireproof, waterproof – plus its value for money, we have no option but to award it our highest commendation:

our Editor’s Choice Award!
Sure, we did not give it any points for beauty but sometimes looks should be, well, overlooked and it can be argued that looking bulky and rather industrial may well be an asset to demonstrate what the ioSafe external hard drives are all about…

Further Reads
The Trial by Fire
The Ultimate Crush