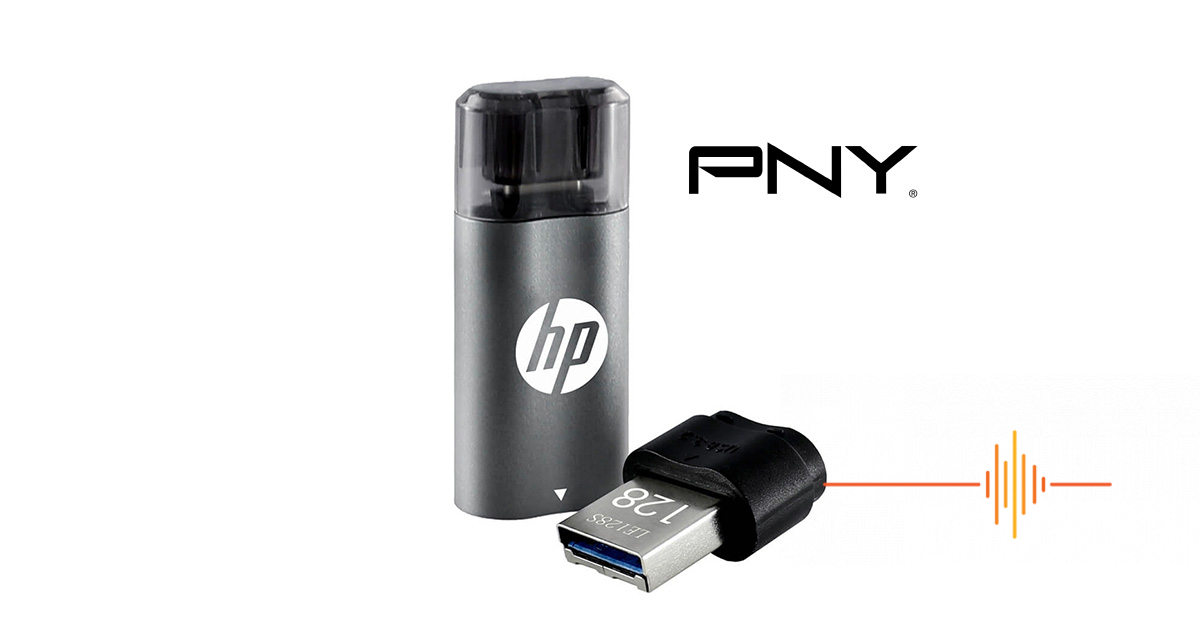 Our appetite for consumption of data and storage is increasing. We are constantly in a battle against limited amount of storage, particularly in mobile devices. This is where an OTG device such as the HP x5600c USB 3.2 Gen 1 Type-C Dual Flash Drive has a place. 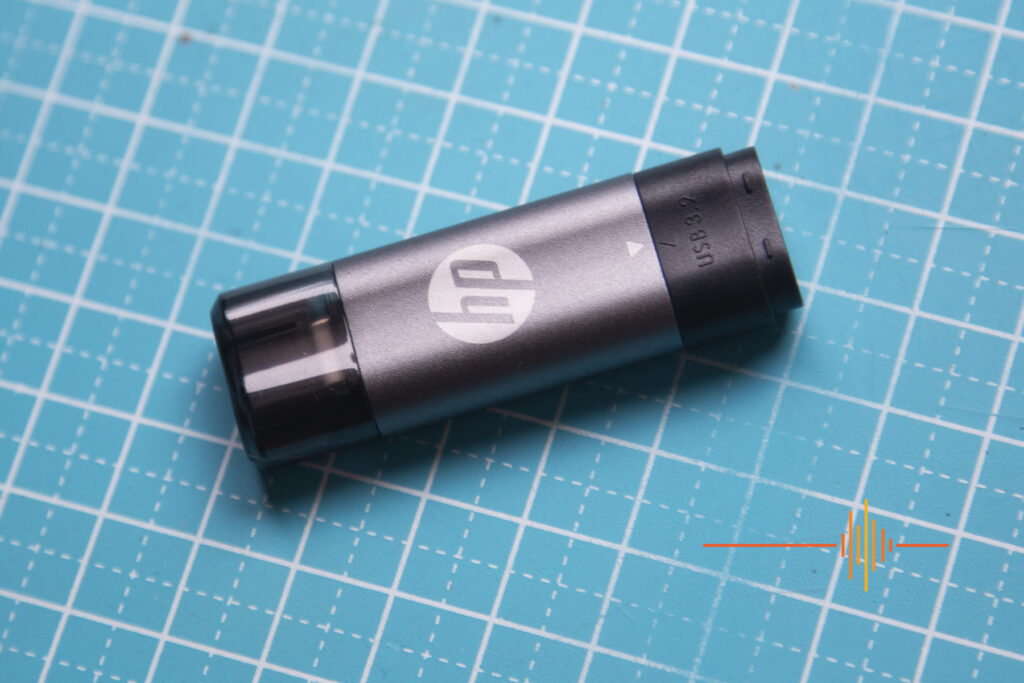 The HP x5600c USB 3.2 Gen 1 Type-C Dual Flash Drive features both a USB-A and USB-C connector, made from a mixture of metal and plastic materials.

The whole thing comes in about 5.5cm long x 1.8cm wide. Small enough to be easy to put in your pocket, big enough not to disappear in said pockets.

The main draw card of this little device, is the USB OTG functionality.

What is that jumble of letterings? USB On-The-Go is a standardised specification that allows a device to read data from a USB device without requiring a host computer. This makes the device become the USB host.

What is the big deal? Well that means you can plug the HP x5600c into your Android phone (because, USB-C not Lightning) and your supported device will see it as external storage. It makes it immensely handy to transfer files off your phone to free up space. Or if you store your music on USB instead of chewing up preciously onboard RAM. So many options. 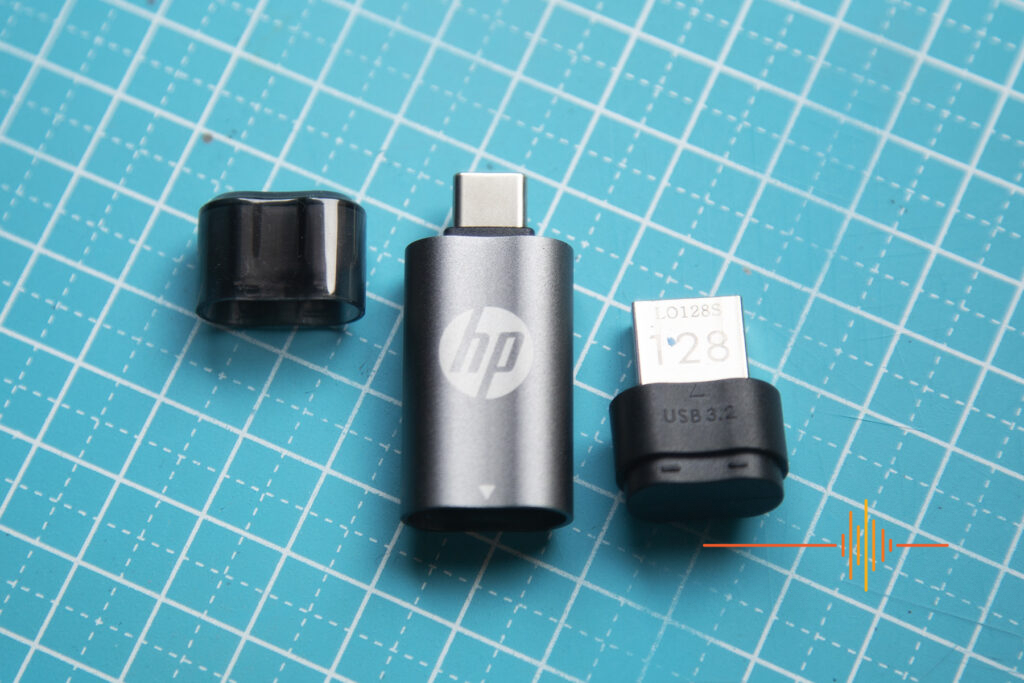 I don’t think I need to explain how to use an USB drive to anyone, so let’s focus on the OTG part of the product.

Most newer Android devices will support OTG, although some manufacturers will want you to explicitly enable the functionality. Google has had this featured baked into the ROM years ago. The trick is that, while Android supports FAT32, Ext4, Ext4 and ExFAT file systems, it will only work with FAT32 in OTG storage devices.

By default most USB drives will have an ExFAT partition on it, this certainly is the case with the HP x5600c.  When I first plugged it into my Pixel 5, it came up with an USB drive error and suggested to format it. The end result was a FAT32 drive which was immediately recognised by the system. After this little step it also works right away on my backup Pixel 2XL. It functions like any other storage device when the OS recognises it.

Transfer speed is the key when it comes to moving data around. How fast does the HP x5600c get?

To get the baseline, I tested the USB-A on it’s own, then the USB-C with a current spec laptop. As can be seen in the charts, the read speed is definitely right up there. The real world write speed though, didn’t hit the rated top (really when do they ever in real life?). It wasn’t terrible by any means and hits a sweet spot with 256KB files. 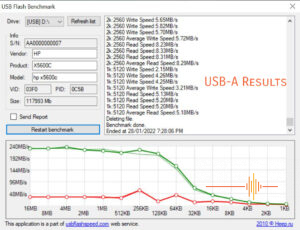 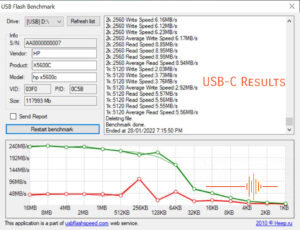 What is interesting is that using the USB-A connector to a PC, it holds a faster read speed longer for file sizes from 16MB to 128KB, whereas the USB-C connector shows a steady drop from 4MB to 128KB range.

The rough and dirty test with Check Flash gives the following results: 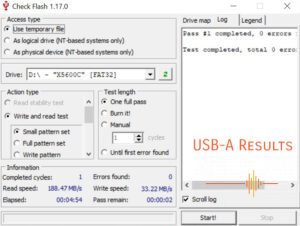 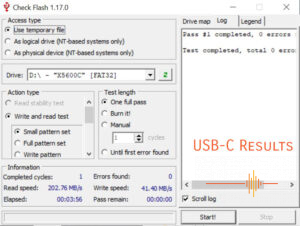 With the Pixel 5, it was writing at around 37 MB/s for a mixed bunch of files. Copying my DCIM (photos) folder though it was peaks and troughs from 85 MB/s to 18 MB/s. It won’t set any records, but it is definitely useable.

The really great part about the HP x5600c is, the OTG part is really just an adapter. That means I could plug any other FAT32 formatted USB drive into the other side and they all work with my phones as well. Just little feature makes the HP x5600c is must buy for the versatility.

The HP x5600c is just a regular USB flash drive, until you start using the OTG capabilities then it becomes another beast altogether.

Whilst real world usage is never the same as tightly defined lab testing procedures, the performance overall is no slouch.  The drive does get pretty warm when under load, particularly the metal bits of the USB-A side. Something to note when being used.

DRN would like to thank PNY for their on-going support.