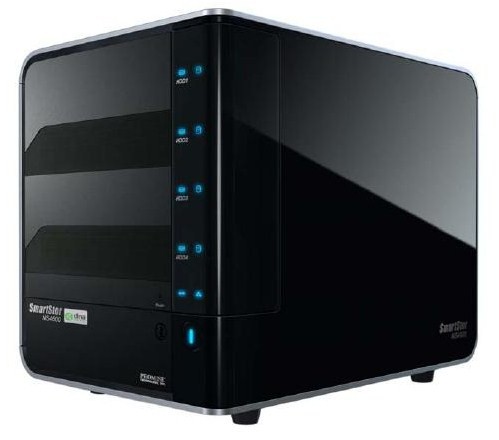 It won’t be long before every business and most households will have Network Attached Storage for a number of good reasons we will explain later.  It is no surprise that NAS systems are proliferating faster than rabbits do their thing….
One of the top suppliers is Promise Technology, Inc.  We had some in-depth write-ups on one of their earlier models (see here)  but now we are fortunate enough to be the first to bring you the scoop about the Promise NS4600 4-Bay Network Attached Storage System.
The box with four Western Digital hard disk drives arrived at our office the day before yesterday and here are our first impressions.
This will be followed by our usual in-depth review by Paul Moons a few weeks later.

First, let’s focus in on some of the reasons why these network attached storage systems are becoming so prevalent.
For one, we all have massive amounts of data that we either generate ourselves or download from the Internet.  Music and video libraries plus photographic images have a tendency to quickly fill any hard drive of any size.  We can store them off-line but how?  DVDs don’t do the job any more.  The only viable option is another hard drive.  But really we also want to have all our data accessible all the time so the hard drive needs to be attached.  And ideally, we want our data to be accessible to all the computers in our business or at home.  In other words in a network.  And lastly, it is important to have enough storage so that we can back up regularly, or more ideally, on-the-fly so that our data is always backed up and secure.  Hence the Network Attached Storage systems.

The design of the NS4600 is such that you would be proud to show it off on your desk.  And that is just from an aesthetic point of view.  Even more important is the inside design where they have used plastic drive rails to hold the hard disk drives, rather than metal ones.  The folks from Promise Technology wanted us to know that going for plastic was the better design decision for a number of reasons: not just because it is a bit cheaper (which it probably is) but because it eliminates vibration which is something you must do without in a setup like this.  Metal rails might be better if you constantly have to remove the hard disk drives but in reality that may never happen.  Unless of course you decide to fit the NS4600 in the cheapest possible way by putting in the lowest quality hard drives with the lowest capacity.  Some hard drives have an abysmal track record when it comes to failure but the high-end Western Digital and Hitachi drives are probably among the best when it comes to Mean Time Between Failures (MTBF).  And my motto is always to go for the highest capacity you can afford.

Installation of these hard drives was a cinch and the total time from unboxing to seeing the NS4600 recognised on my system was less than an hour.  Mind you, I did not refer to the manual, seeing it is not the first NAS system that we have installed.  If this is virgin territory for you please have a good read of the excellent instructions that come with it. Most of your setup time will be spent screwing in the hard drives…

Powering up the unit takes about 90 secs initially.
The "Power" button on the front, by the way, is actually the One-Touch Backup button. Looks suspiciously like a power button but the real thing you’ll find recessed on the rear of the unit…

You can’t see it as a normal hard disk drive on your system initially but after installation of the NaviSmart software  you can easily browse the NAS through your network and map the shared network drives, like use the letter M for your Music drive, P for Photos or Pictures, etc..
When you’re done with the software install, no Windows restart is necessary which is great.

One of the great features of the Promise SmartStor system is that you only need to install the SmartNAVI software on your main computer and not on every system on your network.  They can easily see and access the NAS with the proper authorisation, unlike the Netgear system we had before this.

So the basic steps for installation are:
* Install the four drives as detailed in the Quick Start Guide
* Attach one end of the CAT 5e network cable to the RJ45 connection and other end to Ethernet hub or switch
* Install SmartNAVI software

And that’s essentially it.  You might not necessarily do it within 45 minutes but the instructions will not leave you in the lurch and before long you will have a fast and reliable data storage system and media server with excellent backup facilities.

So far, the NS4600 been everything we expected and hoped for.

Let’s quickly highlight the main features of the Promise NS4600.
We will elaborate on these much more in our in-depth review of course.

Performance wise, we should be able to look for Sequential Read in a Raid 5 situation between 40 to 50MB/s and Writes between 30-40MB/s.  We will probably see this confirmed when we use IOMeter benchmark software.

The SmartNavi software is very easy to use and probably one of the most advanced GUIs that is out on the market today, enabling you to configure the 4600 very easily.

Of course it supports RAID 0, 1, 5 and 10 with RAID 5 most everyone’s choice these days as it combines protection and performance nearly similar to RAID 0.

ITunes Server with Video Playback (Plug-In) provides the ability for iTunes Applications running on
the PC and Mac to automatically discover music stored on the NS4600.

BitTorrent Client/Download Station provides the ability to download BitTorrent or Torrent Content
using the NS4600. This allows for downloads without the need for a PC.

If this has whetted your appetite — stay tuned for Part II.
Coming out soon…