When the DigitalReviews team was in Taiwan half a year ago and visited Synology’s head office, we came away very impressed with their scope of products and vision for the near future.

Our favourable impressions had been solidified over the years by many Synology product reviews. Their Network Attached Storage units for business and personal use have been scoring consistently high in our write-ups. Yet, in the back of our minds, we knew we had to leave some superlatives for their top of the range RackStation, the RS3412RPxs.

Let us take you on a little journey to describe the RS3412RPxs and the market it is aimed at.

The RS3412RPxs is clearly designed for medium and large businesses. Running ahead of ourselves, we also discovered that smaller businesses, such as ourselves, would be very happy to make the RS3412RPxs the repository for all our sensitive company data. But it boils down to price, as always….

Speaking of which: the RS3412RPxs sells in Australia for close to 4000 dollars – that is sans hard drives. Given the sheer number of hard drive bays and the fact that you will want to have the highest capacity drives currently available, there will be a significant investment in media as well. The RS3412RPxs can scale up to 136TB with an optional expansion rack, which sounds like a lot but if you realise that the average household can easily generate about 10TB if they are into video and movie downloads, 136 TB is not over the top for many businesses…

Being at the very pinnacle of the Synology range, the RS3412RPxs is an ultra high performance RackStation which can deliver bandwidth up to 1000+MB sec/100,000+ IOPS. It is a 10 bay system configuration which can scale to the aforementioned 136TB when paired up with the Synology RX1211/RX1211RP. These are connected to the RS3412xs or RS3412RPxs via an Infiniband cable that carries a 12 Gb/s SATA signal to ensure maximum throughput. We only tested the RS3412RPxs itself but we have reviewed expansion racks before and as you would have guessed, there is not a lot of exciting things you can write about a simple expansion rack….

So let’s summarise the main Product Highlights from the Synology website:

Synology gear comes in big boxes, one nested in the other for extra protection. All you need for installation is present: power cables-in this case two cables because we ordered a redundant power supply (power supplies are usually the biggest point of failures in systems like these), there is also the user manual, a driver disc and enough mounting screws for the HDD’s.

We have noted it before that Synology products have a very high build standard and because this is a large unit as well, weighing in at about 13 kg, it’s probably better to have two people lift it up when mounting it in the rack. It is of course also one of the larger NAS units around, measuring 88mm x 445 mm x 570 mm (H x W x D). 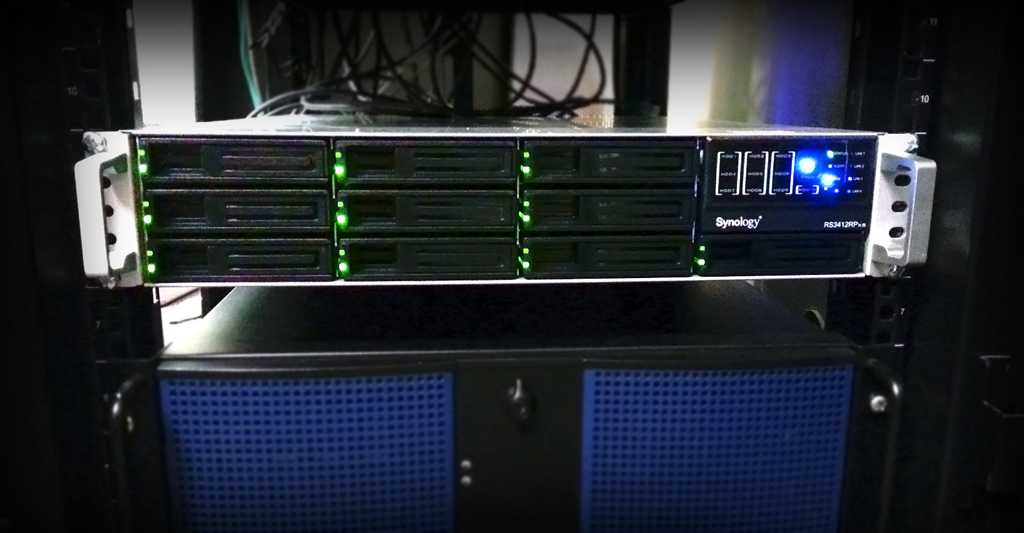 The distribution of the 10 drive bays is a bit unusual in that we have 3 x 3 rows plus a single bay right under the front panel where you will also find the LED display and the power button.

In the back of the RS3412RPxs we have the redundant power supplies as well as 4 Gigabit LAN connectors with link aggregation. There is also support for an optional 10GbE x2 add on card and connection options are rounded off by several USB ports. 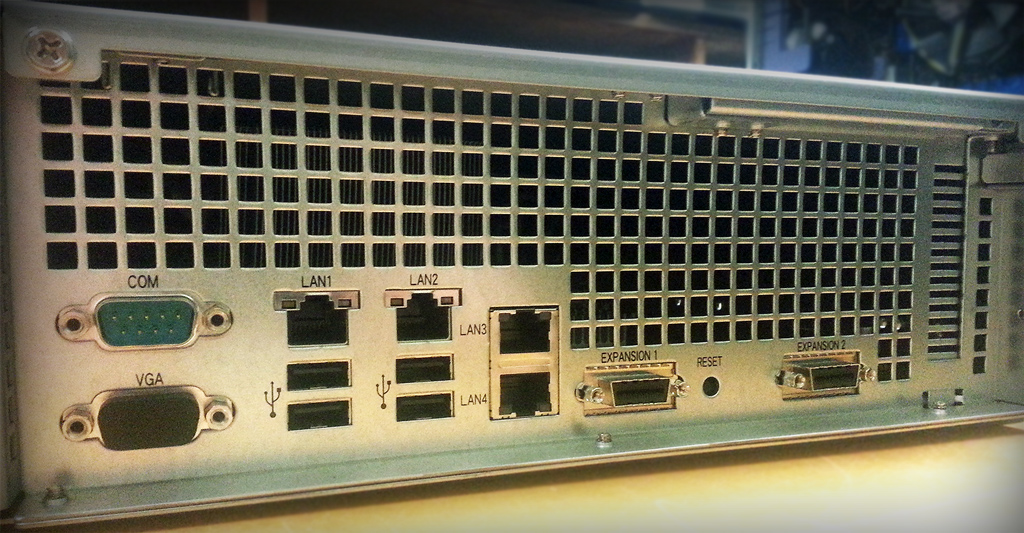 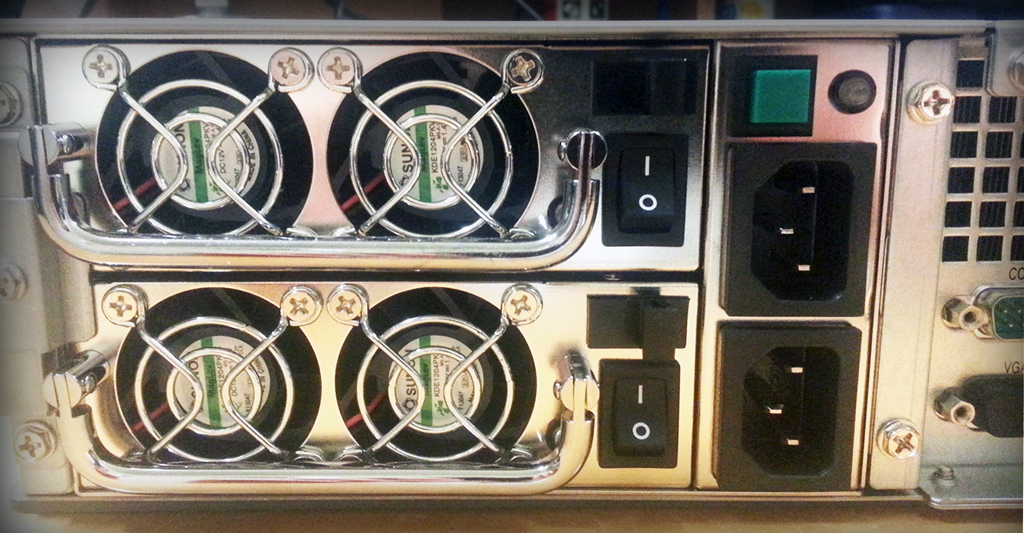 Inside the unit we have 2 GB of EEC memory installed out of a possible 6 GB of RAM.
The design of the cooling system is of utmost importance in systems that are in use every day of the year. 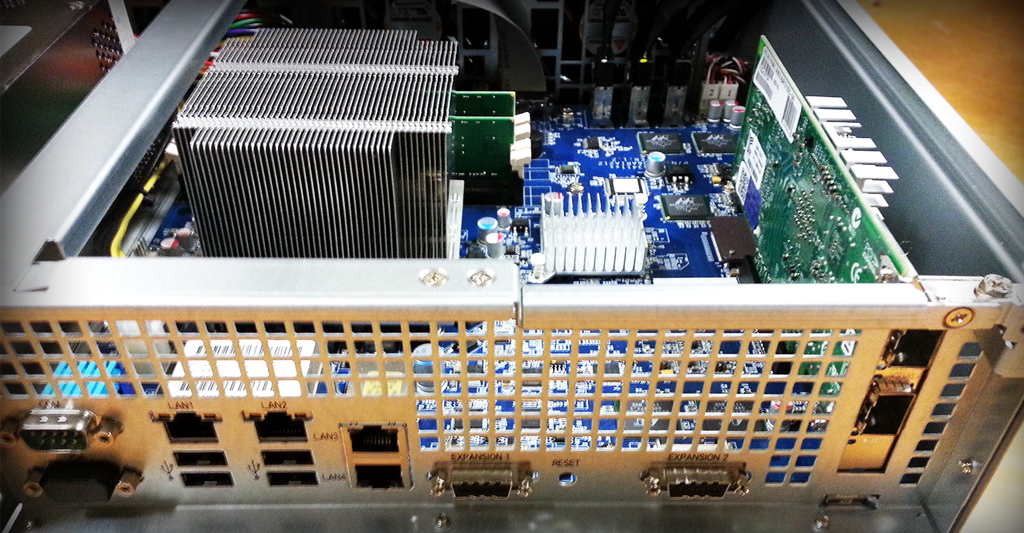 There are four top-notch fans that will move the air from the drives and the system boards down to the back of the unit.

Software Details
We have looked at the Synology DiskManager Operating System many times in the past, most recently in Paul Moons’ excellent write-up of the Synology DS1812+ , so we’ll defer to the full description of DSM 4.1 there (the very latest DSM 4.2 beta just was released as well).

Testing, Testing…
I normally don’t get excited about speed and throughput testing on the NAS units I review, leaving all that “excitement” to our other writers.

Generally, I find that the specs are pretty close to what the manufacturer has been testing for much longer than any website possibly can. There are variations of course due to testing methodology, equipment, network bottlenecks, etc. But the factory specs give a good guideline, if not the best reflection of a unit’s capability.
Nevertheless, when you get a unit such as the RackStation RS3412RPxs with its insane speeds, we got tempted in just playing around a bit to see what the top speeds would be on our configuration.
We loaded it up with 10 enterprise level HDDs and for good measure also chucked in a few Corsair SSDs in subsequent testing.

Well, below are some screenshots that tell the story. 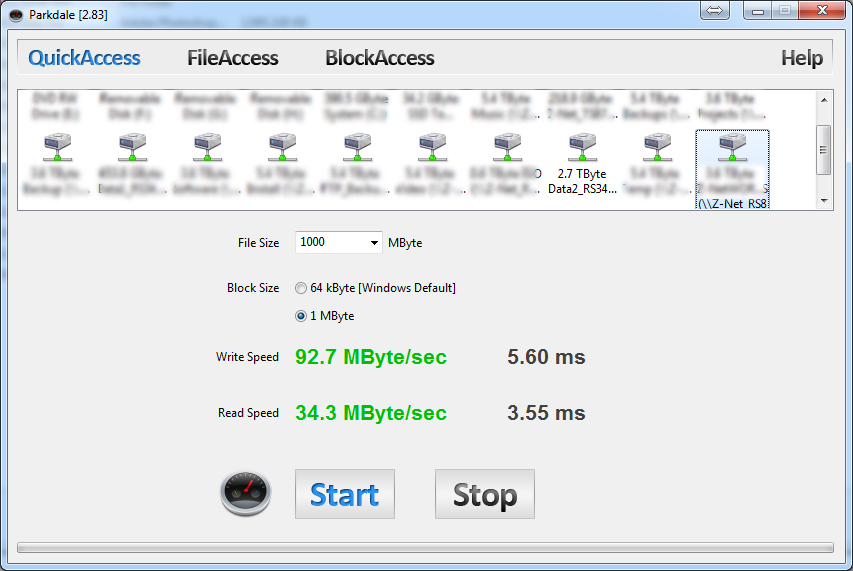 Above is a comparison screenshot based on the earlier reviewed Synology RS810. We used Parkdale for these tests. 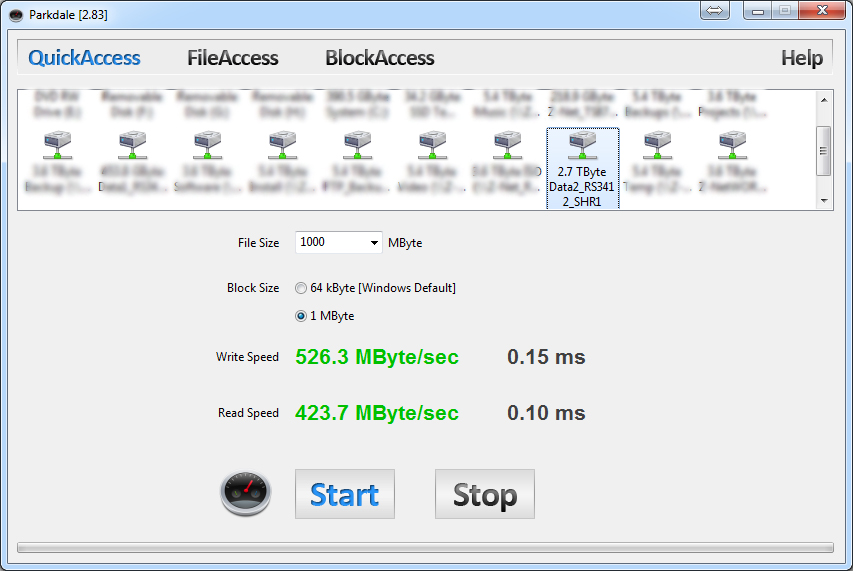 Great Write and Read speeds with 1MB blocks on the RS3412RPxs. 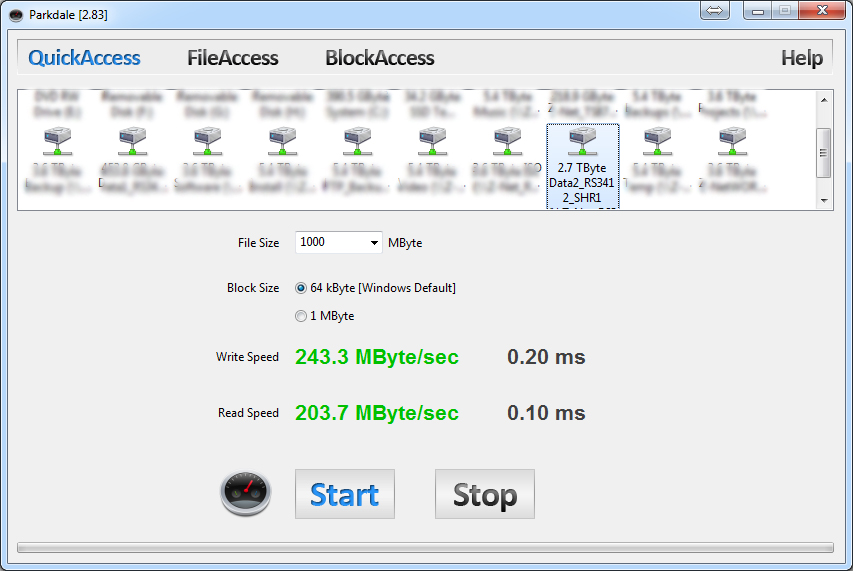 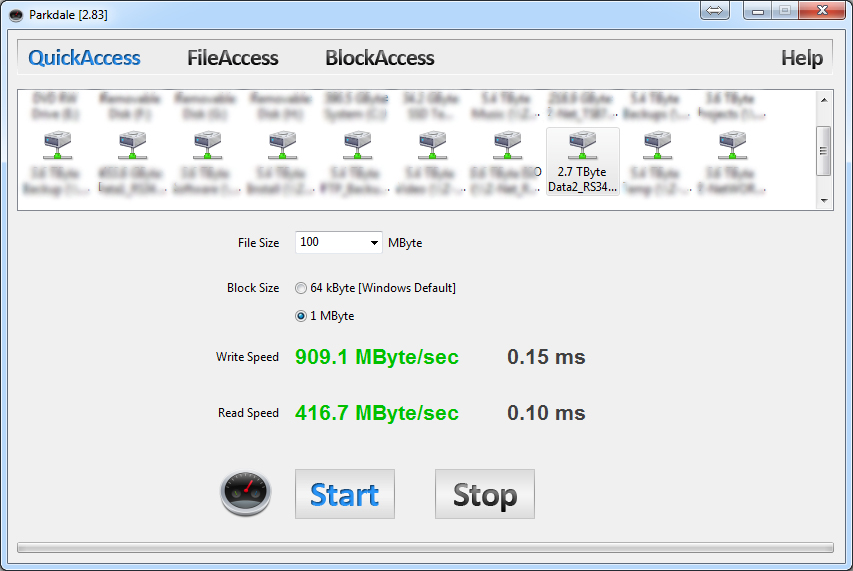 Hitting the stratosphere with these speeds using MTU-9000… 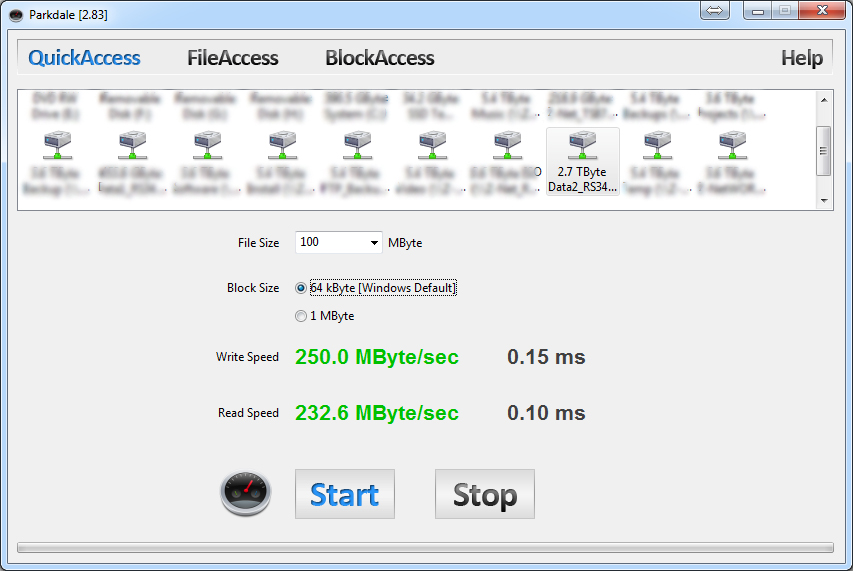 Dropping down again if we use the Windows default of smaller blocks. 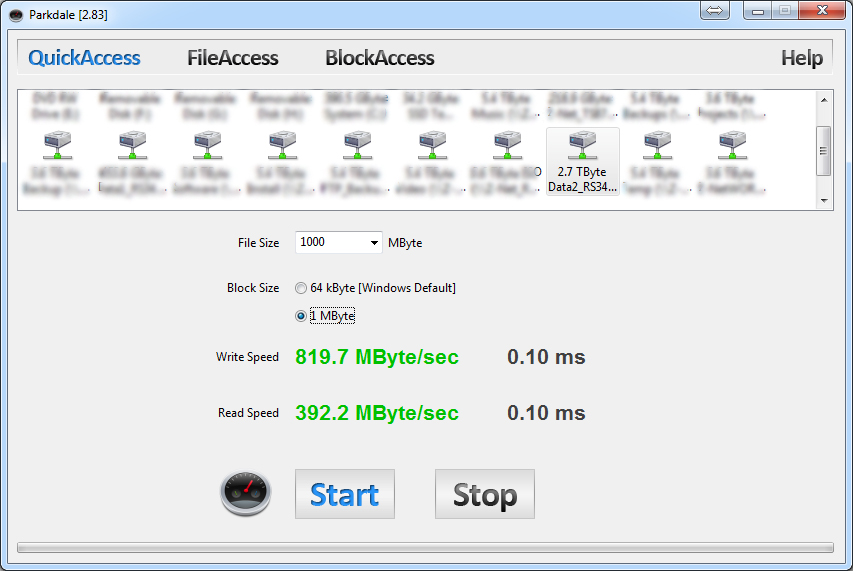 Here we use a larger file size to transfer (1000MB) 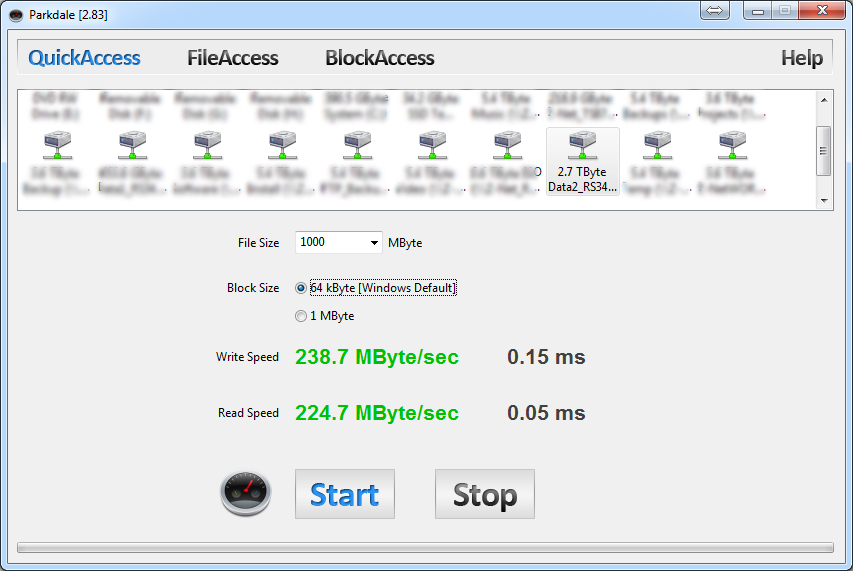 And rounding it off with large file size and small blocks.

The upshot is that with the Gigabit cards the NAS has speeds that are about the equivalent of the internal SSD speeds of our test rig! Which is no slouch either as it drives 8 monitors…
These are truly amazing speeds.

We have the distinct impression that the RS3412RPxs is capable of even higher speeds. In the next few weeks we’d like to do some experimenting to see how high we can tune this system.

And if this NAS is your corporate hub that contains all the priceless data that makes your organisation tick, rest assured that speed of access for all who need it, is guaranteed with multitasking support. Talking about access: various levels of authorisation to data can be created as is the case with most NAS units. Naturally, security has been elevated to the highest possible echelons in the RS3412RPxs.
On that note: you might also use the unit as a Surveillance station. You can hook up multiple IP cameras into the RackStation.

Conclusion
Despite its target market being the high end of town, meaning medium to large businesses or enterprises, we asked ourselves the question: would we love to keep this machine for our own use?
The answer is a resounding Yes and we’re only a small business.
Yet, the only aspect holding us back is the initial investment which is more in line with enterprise IT spending at around AUD3500 for just the unit itself. (Price Range: $3,410 to $4,260 at 21 stores ). Don’t forget the Gigabit cards and almost a dozen enterprise-level high capacity HDDs and you’ve doubled your outlay.

Is it worth it? If your business needs the speed, reliability, redundancy and the multitude of features and functions, absolutely! The Synology RackStation RS3412RPxs is the fastest and most capable NAS we’ve ever tested.
So our rating for the RS3412RPxs would be a solid 9 out of 10 with only affordability for smaller businesses a potential issue.

If affordability is important to you, look at the other recent Synology reviews we’ve done and keep an eye out for the DS1512+ which Kevin Cheng is reviewing shortly with photographers in mind. This 5 bay unit has great features that photographers love, such as Photo Station and Synology Hybrid RAID.