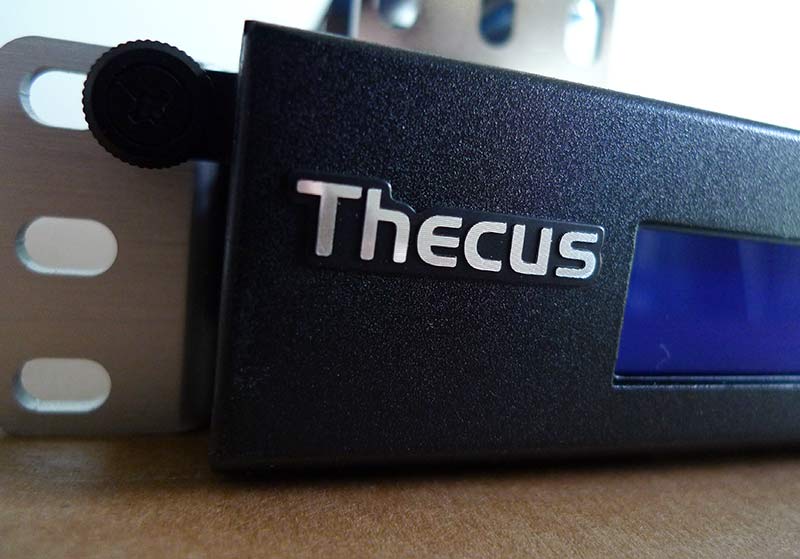 Read on for out take on the latest rack mountable Thecus NAS.

The N4510U PRO comes with everything you need to get up and running: With its two power supplies, the unit comes complete with two power cables, a short length of CAT5e, two fixed shelf rails, a bag of HDD screws and four drive bay security keys. The unit also comes complete with a utility CD and a CD copy of Arconis True Image Personal 2010. Rounding out the package is a quick installation guide, information sheets and a warranty card. 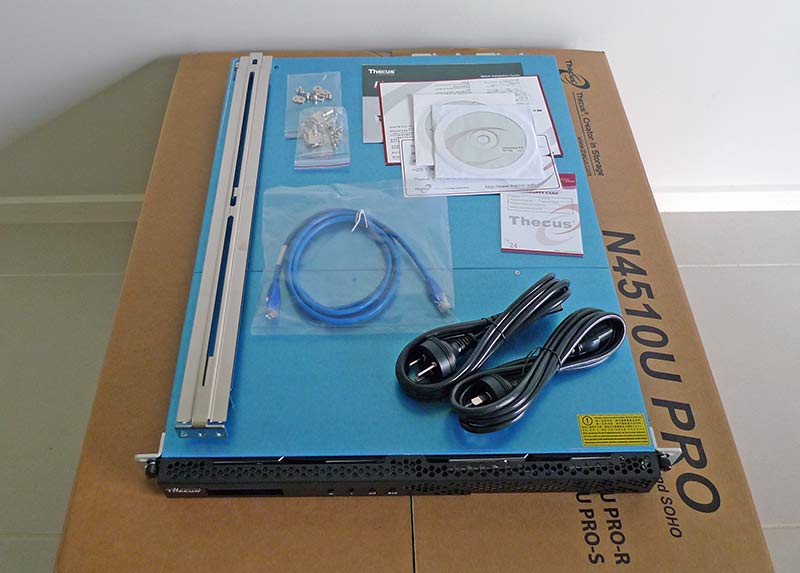 The unit’s design is neat and the front face has a hinged cage with a small LCD information screen on its left along with four navigation buttons. When the cage is folded down, four lockable SATA drive bays become accessible. To the lower right is a small panel which contains two USB 3 ports, four status LEDs, a mute, power and locator button as well as a reset switch (all accessible with the cage in either position).

The rear of the unit is pocked with numerous ports and power receptacles. To the left are the two 250W (redundant) power supplies. Looking more like a fully fledged PC than a NAS, the N4510U PRO has an VGA/RGB, HDMI, four USB, one eSATA and a set of in/out/mic audio ports. And to the far right are the two obligatory RJ45 Gigabit ethernet ports.

The N4510U PRO is a very solid rack unit and at depth of 580mm it requires a rack with a depth of at least 800mm – Our puny 600mm test rack was too small to fit this monster so for the duration, we ran it unmounted.

Worth noting is that the N4510U PRO comes in two variants. The PRO-S comes with a single power supply, while the PRO-R (as tested) features the additional secondary (redundant) power supply.

After dropping in our two 500GB test drives, we fired her up and the N4510U PRO came alive. The front LED announced that the unit was “self testing” before cycling through a slew of boot information. After just under a minute and a half of this, the N4510U PRO proudly displayed “Thecus NAS System Ready.”

The Thecus Setup Wizard we found on the included CDROM was the simplest way to identify the N4510U PRO on our network and allowed us to change the default IP to one set via our router’s DHCP server. 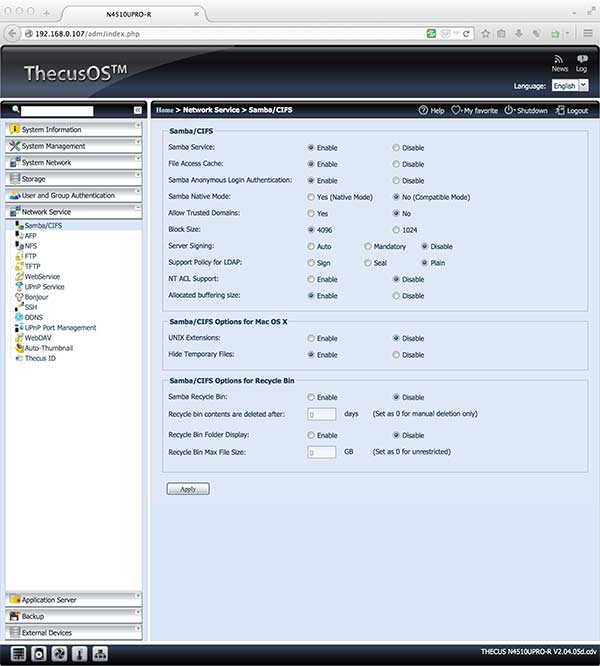 We then logged into the ThecusOS we quickly saw that even at a glance, the interface was far more “pro” than the one seen in our earlier N2310 review.

The N4510U PRO’s interface is relatively straight forward and within minutes we had setup a RAID 0 array for testing using the default settings. Worth noting is that the RAID parameters are all customisable, including stripe size and file system type. While EXT3 and XFS were valid options, we stuck with the default EXT4 file system. 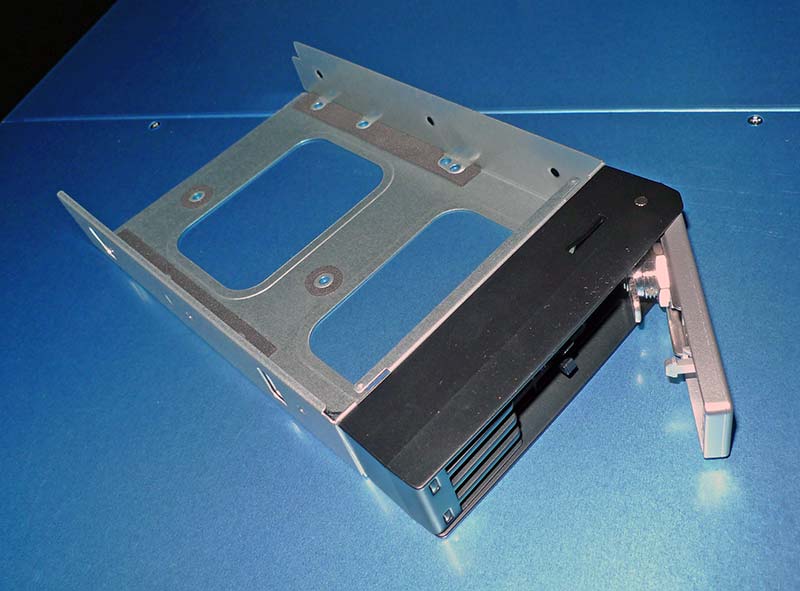 In the RAID 0 configuration, our two 500GB (465GB in reality) provided us with no data redundancy and just over 900GB of usable storage. With additional drives installed within its internal bays, the N4510U PRO is able to create and manage RAID 0, 1, 5, 6, 10 and of course, JBOD arrays. For information on RAID and its different configurations, take a look at this wikipedia article.

While not as polished as the Synology DSM, the user interface on the N4510U PRO was consistent and relatively easy to navigate. Where the unit shone was its high level of configurability. All aspects of the unit’s operation and function can be adjusted via the web interface in a straight forward way. While it wasn’t especially pretty to look at, the interface functioned well and allowed easy access to complicated features and settings. 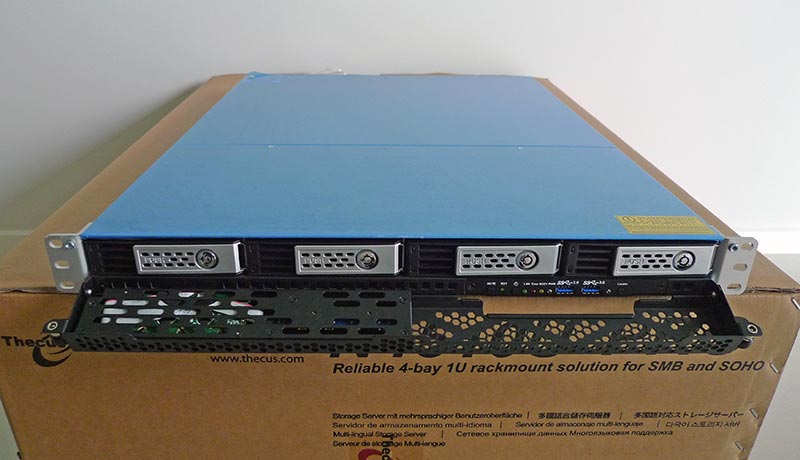 Speed testing was conducted on a CAT6 network via a HP Procurve switch and Netgear consumer grade Router. All transfer tests were conducted via a Mac Mini 5,1 running OSX 10.8.5. For external transfer tests, the Mac Mini’s internal 120GB SSD was used. We also used version 10.3.3 of the AJA System Test Utility and all timing was measured manually via stopwatch.

As part of our general testing, we had the N4510U PRO serving a variety of files across our small/medium network for just under a month and during our time with the unit, we had no problems whatsoever. Apart from the units inherent noise level, we found it to be a reliable and capable network attached storage device.

Like the N2310 before it, the N4510U PRO is able to perform a number of other ancillary functions, such as the ability to act as an iTunes or TimeMachine server as well as download BitTorrent files via Transmission. The N4510U PRO is also able to run other third party software and while the GUI is improved upon from the consumer grade model, there is no app store, per se.

Among its abilities, the N4510U PRO can be woken via a WOL (Wake On LAN) magic packet and can also be scheduled to turn on/off automatically using a 7 day timer. The unit supports all the regular networking protocols including SAMBA/AFS/NFS and FTP and is highly configurable. 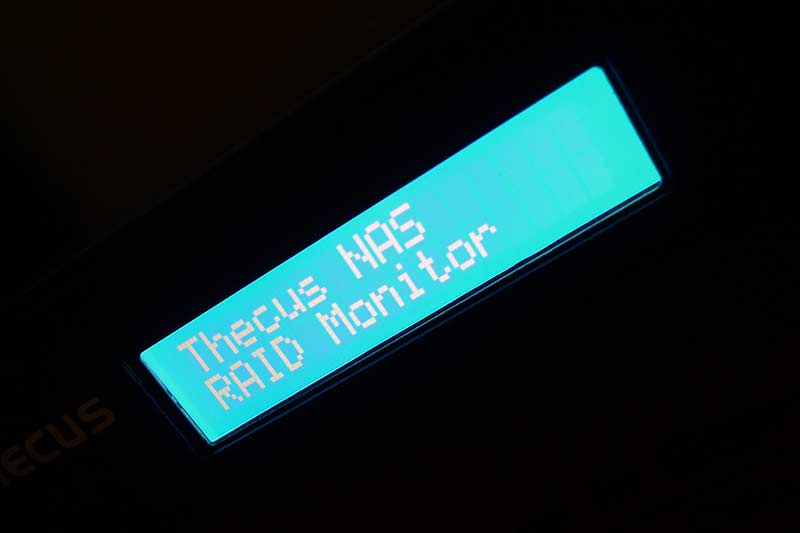 As hinted at earlier, we did find the N4510U PRO rather loud. While we believe the noise level of the N4510U PRO would be reduced if placed in a rack, the general volume of the unit’s fans were, in reality, pretty close to unbearable when working within the same room. Of course, the N4510U PRO has been designed to be installed in a server room away from human work spaces, so this point is relatively moot when placed in its intended work environment.

The Thecus N4510U PRO is an industrial strength unit, capable of high speeds and found it to be very reliable and highly configurable. The web interface was easy to navigate and the overall experience was good. Noise levels may be an issue depending on placement but in a dedicated environment, this should be a non-issue. The addition of the LCD information screen on the unit itself – particularly at this price point – was also a welcome addition.