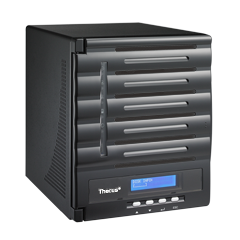 We’ve had the pleasure of testing and using one of the latest five bay NAS stations from Thecus over several weeks. After the many Synology and Q NAP units we reviewed it’s nice to see that they are not the only Taiwanese companies that can deliver a well-crafted, good performing NAS unit for businesses and home use.
These days, functionality and features are probably more important than speed alone so we will be concentrating in this short article on the F & F of the Thecus N5550.

As per usual, let’s have a quick inspection of the actual hardware. The image above shows a familiar looking, fairly square device with five HDD bays behind a hinged access panel. On the front we also have a display with quick access buttons and a vertical strip of status LEDs.
The back panel is displayed below and we notice a full complement of all the needed ports. 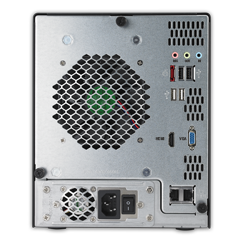 In case you think four USB ports are not enough, the front panel hides a USB 3.0 port as well as a power button and below that a mysterious button with a triangle on it and no description or obvious use for it mentioned in the Quick Installation Manual. We will have to dig deeper for this one! (of course, it was the button that resets the system configuration to default values).
All the bays are individually lockable which is a feature not seen on many NAS units. How useful this is I’m not quite sure as the keys are fairly standard and easy to get. 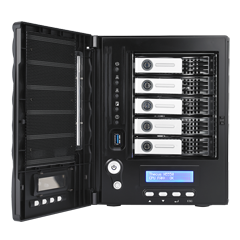 Overall, the 5550 looks the same as many other iterations of the Thecus line, and that is both a good thing and a bit boring. Mind you, the unit doesn’t look too bad and obviously the engineers at Thecus rather concentrate on the innards and update the specifications over the years rather than face lift the box itself. Much can be said for that….

Just one more point on that hinged door: it has a wire mesh behind that panel for the cooling and that’s probably the only redeeming factor to keep the door still there. Otherwise it is more of a nuisance and you need to keep the area on your desk in front clear in order to open it.
As it is, it’s more of a bother to access the power button and the USB 3.0 port so my suggestion for the next new model: put it all out in the open and create a nice, new fascia! It will lift the dated looks quite a bit…
I do think a display is good and am pleased the N5550 sports one. I missed that on the QNAP we last reviewed even though other models in their line do have them.
But when you have a display, make sure that it really helps the user to make sense of the status. During the Self-Test the message said:
“Check FS, Please wai”
I know there was no room to spell “wait” fully but was pleased it told me about the FS check even though I have no idea what FS in this context means… Feature Set? Probably not. 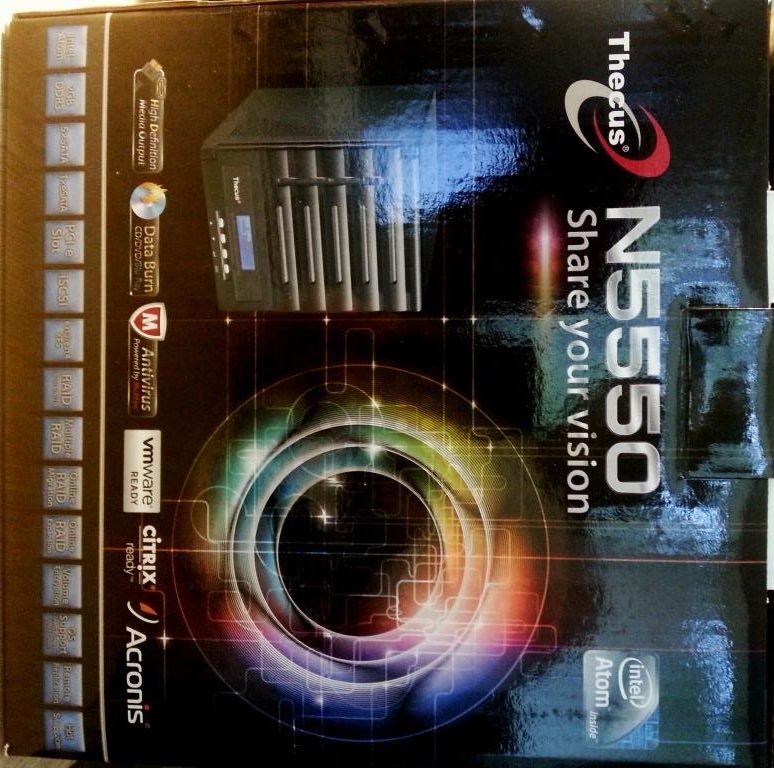 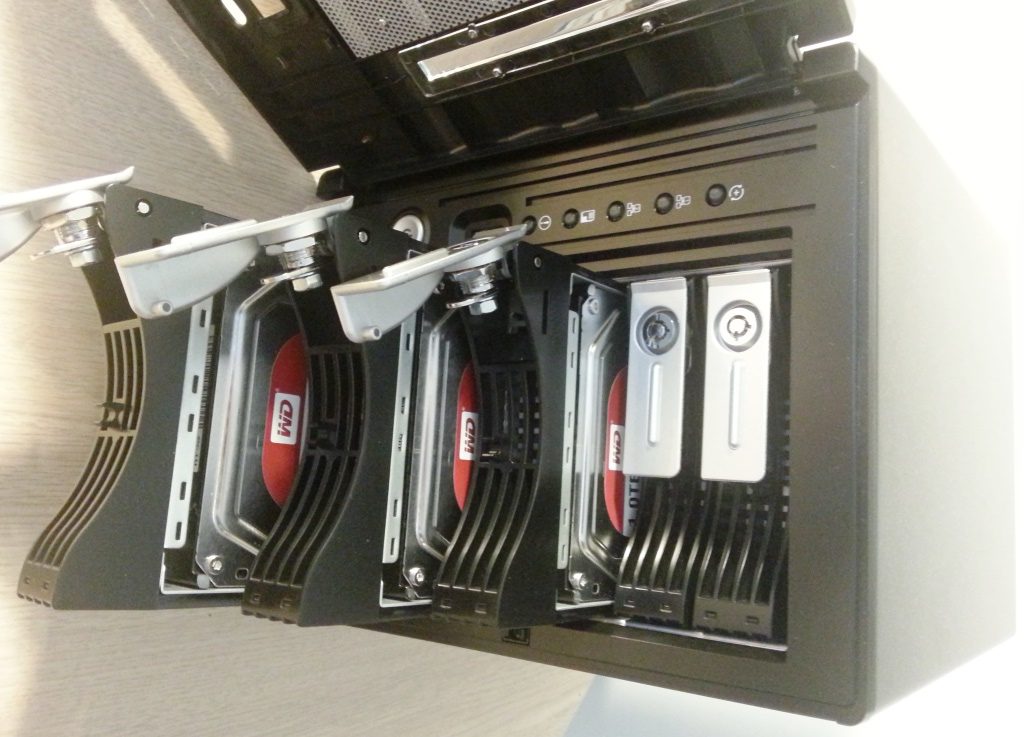 Fan noise. It has to be mentioned: I’m allergic to noticeable noises from electronic equipment.
If your PC makes much noise you might not notice the N5550. Same if you work in an open office environment. The Synology DS213air we just reviewed was quieter than an HP OfficeJet in idle mode. True, that one has only 2 bays but it can be done.

Features and Functions
Of course, it’s not all about the looks (don’t tell Apple that!). So, the N5550 houses a very extensive feature set, driven by a dual-core 1.86GHz Intel Atom D2550 and a single stick of 2GB Transcend DDR3 memory.

Whilst we still talk about the hardware side of things, let me mention the HDMI connectivity. As with the QNAP we reviewed a few weeks ago you can download and implement a third-party XBMC add-on module from the Thecus website. So there are some great multimedia possibilities here. I also like the Audio Out jacks so that you can plug in some speakers (and a screen via HDMI or VGA) and you’re all set!

We will have to look to software to see the full feature set of the N5550.
ThecusOS 5.0 is a bit of a bland name but packs a punch. There’s a live demo on the Thecus website so that you check the various features.
It will be no surprise to learn that Thecus has implemented a full range of the usual features you’d expect: centralised storage, multimedia streaming, different RAID possibilities, user quotas, and remote backups. It’s all there and then some. It far exceeds the needs of most home users but in case you’d need it, you have it thrown in, all at a lower price point than the competition.

It even has Acronis True Image – my favourite backup program included. The only minus here is that it is a 2010 copy, not something more up to date.
You can expect transfer speeds around 100MB/s and this is pretty good for its price point. Speeds obtained will depend much on your own hardware, type of files used, etc. There are many variables here but the N5550 is a solid performer. Restoring RAID volumes after a crash is also relatively fast.

Conclusion
Expect to pay around $600 (Australian) for the Thecus N5550. That’s a good price for a NAS with all the software features you could want, all the connection possibilities you could need and probably all the capacity (up to 20GB) you need with these 5 bays. The only minus points are the somewhat dated user interface and the chassis looks. But it is all functional – even the fan works hard and that is very noticeable!
It seems that Thecus clearly aims for the budget conscious consumer and consequently prices these five bay units well below those of QNAP and Synology.

We next might want to have a look at one of the top-of-the-line units from Thecus, like the N16000, as we have reviewed similar rackmounted units from our other friends in Taipei (see our many QNAP and Synology rackmounted NAS reviews). That will tell us whether there are any significant performance and price differences on the high end of business.