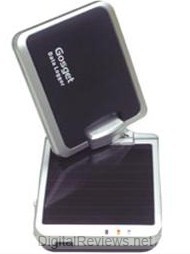 Another day, another GPS receiver manufacturer, rebrander, it seems.

Ever heard of the name Gosget?  Me neither.

There is no excuse for ignorance so we looked up some details for you.

A couple of the units look very much like some of the Qstarz receivers that we recently reviewed (Travel Recorder) and it also seems another reincarnation of the i-Blue range, like the 737 and 747.

You can find the details of the solar unit below.