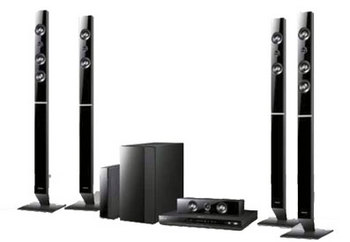 Following up on our previous review of the Samsung Series 6 LED Smart TV we now complete this write-up with our 3-D experiences and the installation and testing of the most popular home theatre option, the Series 5 Home Entertainment System.

In the words of George Lucas, the renowned filmmaker, a good sound makes up 50% of the whole viewing experience. How true this is we all know from visiting a movie cinema where surround sound dramatises the special effects of the film. It is somewhat surprising then that we could be satisfied with a few tiny speakers on a large but very flat LED screen, speakers that are also downfiring, meaning the sound is not aimed directly at you. A good sound system, compared to that on a TV, already can be had for a few hundred dollars. We are going slightly higher with a system that retails for $899. Again, as I mentioned in the previous review, I’ll be surprised if you actually have to pay this much in your local shop.

The HT D5550 model from Samsung that we are reviewing today is a popular home theatre option with four so-called tallboys plus the centre speakers and a subwoofer.

Installation
The box this system comes in is fairly heavy (30+ kilos) and you will have to set aside a couple of hours to unpack, unwrap and assemble all the various bits and pieces before you start setting up whole house audio.

The tallboys have three different components to screw together and you have to be careful to line up the vertical pieces with the base otherwise it can look like the leaning Tower of Pisa!

Speaker wires are run along the back to the heart of the system: the 3-D Blu-ray player unit. My advice? First look at the back of this unit for the colour coding as each speaker has its own unique colour. That makes it a lot easier to reassemble everything when you move the setup. I did not look first and had to rewire a couple….

Talking about wires, the rear tallboys are so called wireless speakers. This has the advantage that you don’t have the run any wires from the main unit to the back of the lounge. However, “wireless” is a bit of a misnomer as both speakers are wired to a wireless receiver which is plugged into a power point  as well. So it is a bit of a halfway solution but still preferable above wired speakers. I’ve had some less than favourable experiences with wireless speakers in the past but in this case they all performed flawlessly, maybe due to the heavy duty wireless receiver. It would be handy if the tallboys were made so that they could swivel on the square base as often they are right in the corner of the room but you want to aim them towards the middle of the room. Apart from assembling the speakers the rest is fairly straightforward.

The build quality of the main player unit is quite good and looks very attractive apart from the glossy veneer on all the components of the system. I wish manufacturers would provide optional matte exteriors where you don’t see all the dust, finger prints and glare! But piano black is the cheapest option to manufacture this stuff, I suppose….

What I like about the player unit is the slot loading of the disks (it’s pretty fast too) and a stylish touch “volume knob” on the right. Other than that there are no physical buttons on it but all the icons on the display are touch sensitive and everything beyond the basic functions is done via the remote control. This remote is very similar to the one for the Samsung TV, which is good and which is bad. It’s good because the design is good but bad because I always get confused between the two! Fortunately there is also a bit of overlap between the two so we can probably make do with one. With Anynet+ (HDMI-CEC), you can control all of your HDMI-CEC compatible digital AV devices with a single remote control, regardless of the manufacturer, but I still am juggling the 2 Sammy remotes all the time… 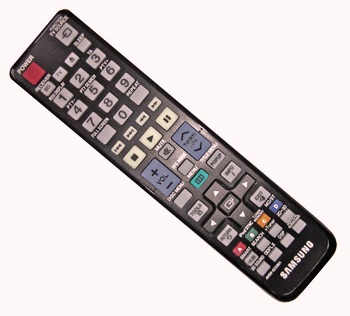 Performance
There is an automatic acoustic test program which is highly recommended to run so that it can optimise the speaker settings for your particular room. Samsung provided a microphone that you can put on the floor close to where you will be sitting. A 3 min acoustic test will then be run and feedback from the speakers calculated for optimum results.
Now it’s time to put the first Blu-ray disc in to test the output. Hopefully you have chosen one with an excellent soundtrack that you have listened to before on just the TV itself. The difference is dramatic. Most people are not audiophiles and would not benefit from a really top of the line system but this particular home theatre system delivers all the goods for a quite acceptable price. We have tested the speakers at very high (max) volumes and found no significant distortion. One member of our team who has perfect hearing also declared that the speakers sounded awesome, despite the fact that the build quality of the tallboys is not magnificent. If there is any weak link, it has to be the subwoofer.  It would have been nice if the centre speakers, through which you hear most of the dialogue in a movie, would have fitted in right underneath the 46 inch panel but it is just a fraction too high. 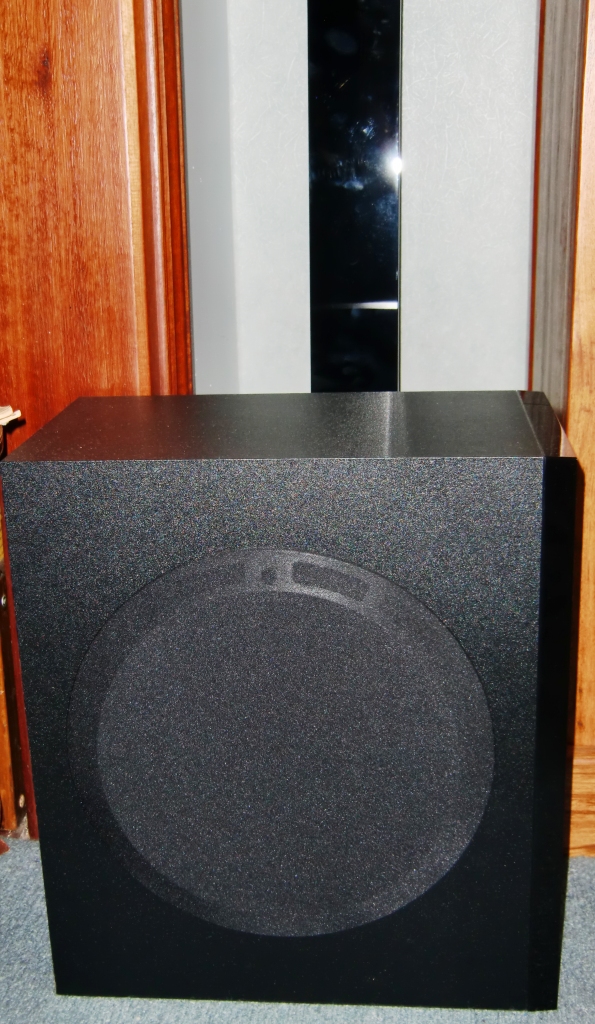 Extra features
The D5550 has many of the same smart features that we already discussed in our previous review. That’s nice but I’m not too sure about the usefulness of most of these if you have already a Samsung Smart TV which is fully compatible with it. In fact, I sometimes got confused which smart hub I was accessing! The main thing I wanted to achieve, apart from playing movies, was to output TV sound through the theatre system. That should have been very easy to do and is also a core function with any set up but probably because there are so many options it was rather tedious to achieve. This is the solution: Don’t use the most logical ARC — Audio Return Channel — port on the TV! The Nr 1 HDMI (DVI) port doesn’t work for this purpose. Use #2 only. Samsung should have marked this as an ARC HDMI port. Connect this with the HDMI OUT port on the D5550. Select D-IN via the Source button on the remote. Press the second button (DDPLII) on the bottom row of the remote to select Stereo.
Voila! Easy, not?! Grrr…

Please be aware that you have to buy your own HDMI cable as there is none included with the home theatre system. Don’t go overboard on HDMI cables that cost over $100 as you can easily get high-speed cables with ARC for under 20 bucks on the Internet. Software wise there are features such as Anynet+, BD Wise, Allshare. Of course Internet connectivity is a big feature and wireless LAN is built in. Have a look at the specifications below as the list is very extensive. The 5550 plays basically any disc format in the tray-less slot. All the mainstream codecs can be accommodated and the same applies to video and photo formats. There’s also an FM Tuner but it is harder than it should be to tune the Presets. And finally you’ll find the obligatory iPod cradle in the big box too…

3-D Experiences
I have been a bit of a sceptic when it comes to viewing stuff in 3-D. Yes, the glasses are a bit of a turn-off in general and when you have visitors over you often don’t have the required number of glasses so the 3-D feature is switched off on those occasions! That said, the Bluetooth glasses that Samsung provides for the 2011 range of Smart TVs are quite an improvement over the previous ones. They are lightweight, easily fit over normal glasses, are easy to switch on and have a reasonable battery life. And they look pretty decent too.

One of the movies we watched in 3-D was Shrek 3. The 3-D effects were not particularly great in that film but we also watched an IMAX remake on Blu-ray of the Grand Canyon which was brilliant, particularly when they did the credits ensconced in bubbles of water that seem to float in the middle of the lounge. That experience made us more of a believer in this technology even though a very recent study funded by Samsung indicated that many people still have problems with visual discomfort, fatigue and headaches when viewing things in three dimensions on a flat screen. We are pretty confident that all these issues will be ironed out in the next few years as this technology matures. For now, it can be quite an enjoyable and fascinating experience. Upscaling standard DVDs to 3D does give a reasonable depth effect but I don’t think I’d be keen to watch everything in 3D though. The overall effect is not that compelling and it’s better to sit down to don the glasses for a real, made for 3D movie.

Conclusion
We have had at least a dozen people participate in the ultimate test: sitting through a few 3-D movies with the sound system turned up reasonably high. They all commented on the amazing difference a good home theatre system can make on the whole viewing experience. There is no strain on this 1000W system even at high volume levels, no distortions at all. The bonus of having an integrated 3-D Blu-ray player included in the package plus the “wireless” rear speakers makes the outlay of between 700 and $800 very justifiable.

Any home theatre system will add greatly to the enjoyment of watching movies but we can highly recommend this particular Samsung HT D5550w  system if you already have a Samsung TV, even though the additional smart features that come with this home theatre setup are a bit of a doubling up on what is available with Samsung’s Smart TVs.

My only wish would be for Samsung to have integrated a hard drive into the Blu-ray player unit with twin tuners for recording purposes. It’s all about minimising the number of boxes and wires required.