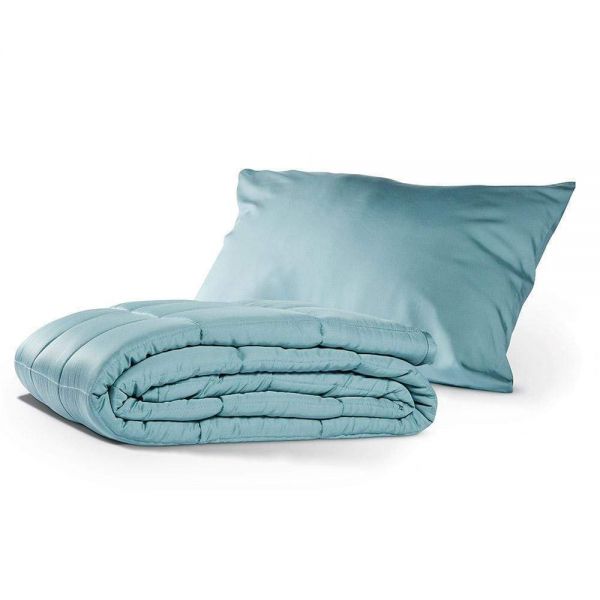 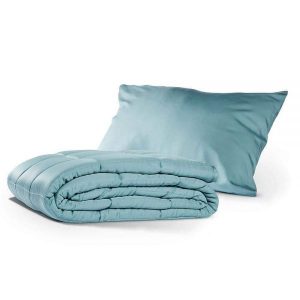 About a month ago I wrote a review on Glow Dreaming, a device that is designed to be sleeping aid for children.

My oldest boy Master L has always taken a while to fall asleep for one reason or another, and I have really been wanting to try a weighted blanket to see if it will help.

The folks over at Calming Blankets kindly tossed a discount code my way.

How did it work for my son?

What is it?
I first came across references to weighted blankets about 2 years ago, in relation to helping people with Autism Spectrum Disorder to fall asleep and stay asleep. Master L has mild ASD and I was ready and wanting to try things to help him, despite the very limited and non-routine contact I have with him for a long period of time. It just so happen it took almost two years before I could put some of my knowledge into practice.

Weight blankets bear some resemblance to a heavy quilt, with weights made of plastic, glass or metal sewn into pockets and evenly distributed beneath the cover. It is sometimes known as a sensory blanket, calming blanket or anxiety blanket. Whilst that may bring to mind the image of Linus van Pelt and his security blanket, this is something else entirely.

It is claimed that the weight of the blanket simulates the feeling of being hugged or held, and may be of benefit to sufferers of insomnia, anxiety, restless leg syndrome, ADHD, autism spectrum disorder and sensory processing disorder. Much of the literature around weighted blanket has limited clinical trials backing any findings.

I know that historically Master L struggles to fall asleep. There are plenty of factors involved including his ASD and some sensory processing issues. His mother has opted for a pharmacological solution whereas I take a very different stance on the matter. So once a fortnight Master L stays overnight with me, I put his Calming Blanket to the test as much as I can.

First Impressions
Weighted blankets come in various weight graduations, conservatively the general rule of thumb is that the blanket needs to be 10% of your body weight plus 1kg. Master L would have come in for the Kids Blanket weighing 2.2kg, but after a good chat with my chiropractor, I decided to get the 4.5kg blanket instead. As the late Robin Williams once said “Ah yes, divorce, from the Latin word meaning to rip out a man’s genitals out through his wallet”, and I am not in a position to get a blanket that was too light for him and get a second one not long after.

Master L’s green “Maldives” Calming Blanket and cover arrived in between one of his overnight visits. On the surface it looks like a good goose down doona with the cassette type squares that prevents the down from all falling to one side of the donna. The compartments on the Calming Blanket function exactly the same way, but with glass beads instead of goose down. There are a bunch of reinforced loops at regular intervals along the sides of the blanket.

Putting the cover on requires a little planning. Those reinforced loops are meant for the tie downs on the inside of the cover, to keep the blanket firmly secure inside the cover. I found the best way was to turn the cover inside out and work from the edge furthest away from the zip and pull it down as you go.

In Use
Bearing in mind I only have Master L sleeping overnight once a fortnight and I have absolutely zero credible information about his actual sleep routine when he is not with me. In an event horizon situation, I parent by the seat of my pants through observations, innate knowledge of my children and lots of guessing. In other words, just another day in parenting paradise. In the distant past when I did bedtime routines with Master L, he could easily take well over an hour to wind down and sleep. Rumour has it that he is regularly given melatonin tablets to help, but it is not in my repertoire.

Before I used the Calming Blanket on Master L for the night, I made sure that he could lift it off or shift it so he can get out from under it comfortably. The 4.5kg blanket was punching above his weight group so safety was first and foremost. He was rather excited at the prospect of having a sleeping aid to try out and “help daddy with an important piece of writing”.

Master L likes to pretty much bury himself under the doona from head to toe when he sleeps. It may be a comfort thing, or being enveloped in a doona makes him feel grounded. I can’t explain it either, I like the feeling of a doona on my back when I sleep. Like father like son I suppose.

In conjunction with a consistent evening routine, Master L has used his weighted blanket on seven occasions so far. To begin with, a weighted blanket is far harder for Master L to kick off in his sleep. On the first evening we had the Calming Blanket, he asked for the rain noise that I have previously used to help him wind down, and that was the last time he asked me for it. He tells me that it makes him feel good and secure when he is under it. The results certainly seem to reflect it as he is usually asleep in between 15 to 30 minutes, rather than the hour or more previously it would take him to wind down.

Is it magic? Probably not. I think a combination of routine, certainty and security with me is a large contributor. The weighted blanket is another tool in the arsenal that seems to help. Last weekend Master L had an afternoon nap before we attended the Glow Winter Festival, which would normally mean he would be up til all hours excited, full of chatter and energy beans. I put him to bed at his usual time with the weighted blanket, and he was out like a light within 20 minutes. On every occasion he has slept through the night and woken up calm and fully refreshed.

Conclusions
By my research, the concept of weighted blankets as a therapy aid has been around since the 1960s in the autism community. It now has garnered mainstream attention and toted as a cure all product for stress, anxiety, insomnia and the like. I am all for exploring non-pharmacological solutions first before resorting to medications and for Master L, this fitted the bill for his specific needs. He really enjoys having his “special blanket” and I believe it is helping him relax and feel secure.

There is a dearth of independent scientific research about the benefits and effectiveness of weighted blankets. Like everything else, it is not for everyone and is down to personal preferences. Unfortunately given my aptitude to sleep pretty much at will, I am the worse person to test it out personally. However I am willing to take any small gains to help Master L.

The Calming Blanket is not a cheap investment, then again neither is the long term medicated route. The adult bamboo weighted blanket RRP at AUD$339 although there is currently a sale on reducing it by some $40-$50. The full range of products is available here. DigitalReviews would like to thank Calming Blanket for their contribution to this review.