Sometimes simplicity is THE secret sauce for a storage solution.

Regular readers of this site will have seen our previous Drobo reviews – both network and direct attached storage models which we rated very highly for their user friendliness and apparent simplicity. I say “apparent” as the magic to make the Drobos so user friendly is anything but simple.

So today we have a short review of a DAS unit with a gigantic storage capacity: the Drobo 8D.
Eight bays that you can fill up with the highest capacity hard drives you can afford.
Let’s have a look at some of the features.

Best to have a quick read of its smaller sibling first, the Drobo 5D3 which we reviewed here.

We also explained the diff between DAS and NAS models. Drobo understands correctly that the simplicity of directly attaching a bunch of hard drives to a computer is often all that is needed.

Take a professional photographer, for instance, who needs oodles of storage with the redundancy that multiple drives can bring. No need for a network solution in most cases. A small DAS unit will suffice.

Doing video? You may want to go bigger: 24TB up to 80TB or higher if you can afford the big drives. Don’t forget that the biggest strength of the Drobo arrays is the ability to mix and match HDDs. In other words: you’re not restricted to buying drives that are all the same size. So you can start small and expand over time. Volume size, by the way, is 128TB.

One of the great features of any Drobo unit is the way you can see at a glance how much storage capacity is used and the health of the drives. See schematic below. 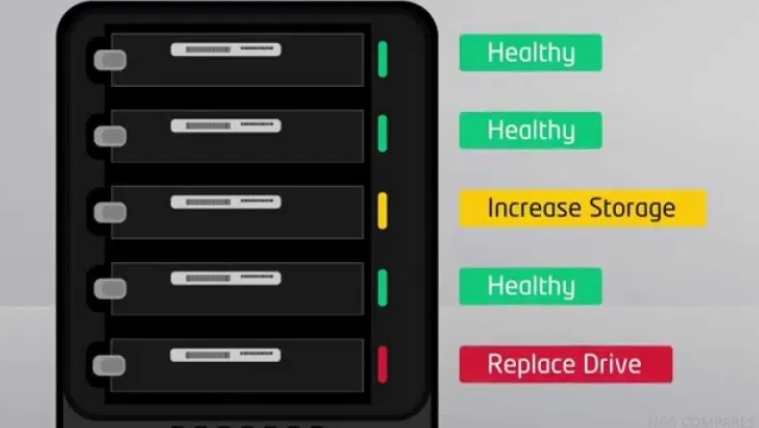 Another way to make it easier to insert or change drives is that all unit use slots rather than trays. No fiddling with screws or clamps. Just insert them like a video cassette (old enough to remember them? Yeah, that’s before streaming became the norm…)

So what other differences are there between the smaller 5D3 model and the 8D other than the 3 extra bays?

It’s the fastest unit Drobo has produced to date. Hot caching? You may not know what it means or that you even need it but the 8D keeps a copy of your most frequently accessed transactional data in the Drobo Accelerator Bay which utilises the speed of an SSD in a rear mounted slot, and – so far – the 8D is the only Drobo with Intelligent Volume Management technology. 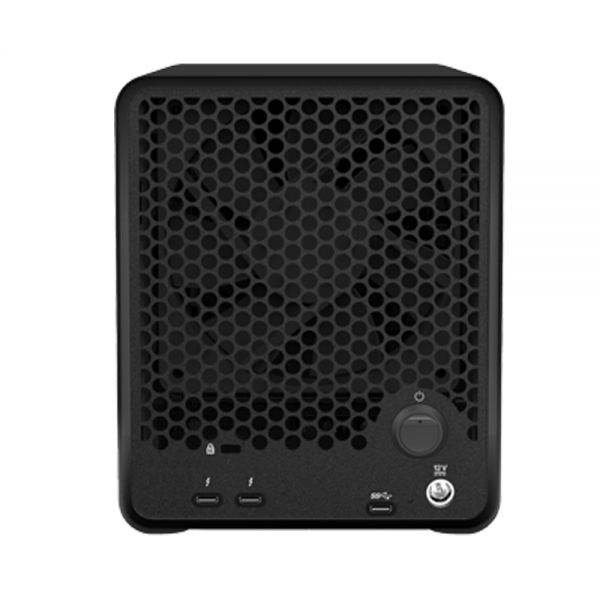 Dual Thunderbolt 3 connectivity is a big part of the speed you need.
We’ve sometimes said that you don’t invest in a Drobo because of its speed – meaning there are faster units out there. However, the 8D is no slouch! There are of course many factors that determine the throughput so we should not focus on what a unit is “theoretically” capable of.

Here’s one indication that Drobo did not take any shortcuts to give us the best speeds possible: normally a DAS unit needs a lot less processing power than an equivalent NAS. But the 8D has an impressive 1.6GHz quad-core Marvell ARM-based CPU instead of a cheaper RAID-on-Chip.

Recovery from a drive failure (a fairly frequent occurrence, alas!) is also an area where the Drobo shines. With its BeyondRAID technology your array can seamlessly recover your data and the best thing is that you can still use your machine in the meantime! Zero downtime when changing, replacing and adding drives!

Drobo can even protect the data that is being written at the moment of a power failure by drawing juice from an internal battery which will ensure that any data on the move will be written into flash storage. This is a great feature that we have not seen in other arrays at that price level.
However, my recommendation always is to have all your critical gear, like PC and storage, connected to a UPS.

There’s probably no other storage array that works so intuitively and simply as the Drobo range of DAS units. The 8D is the epitome of fast, powerful, safe, redundant data storage.
Expansive (can use daisy chaining if you need more than a 100TB or so). And not too expensive either at around $2500 (ex GST) from Aussie distributor ACA Pacific. And there are many other places here in Oz to source one.

One proviso: with Thunderbolt 3 connectivity this is a Mac machine only.
If you need a Windows array the best bet is the 5D3 for now.

Heads up: there’s probably an 8 bay NAS array heading our way in the next quarter. So check back soon for a more extensive review of Drobo’s latest and greatest here on DigitalReviews.net