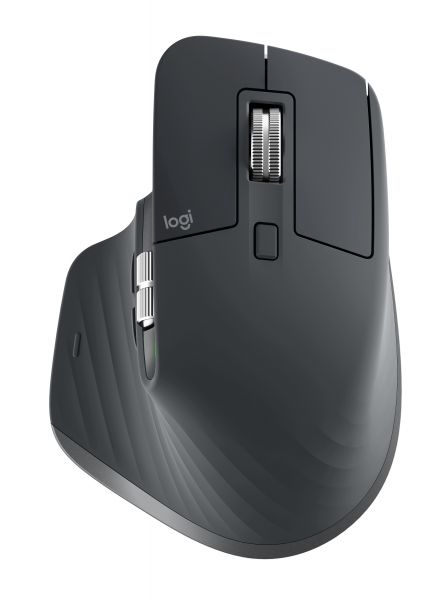 Logitech MX series has long been my to-go for a workhorse mouse. There is some history before I had the MX Revolution, a truly magnificent mouse with it’s giant dongle which I kept for years and years until I worked it to death. I dabbled around for a few years until I adopted the MX Master which has been my constant companion in my work bag. I stuck with the original MX Master through thick and thin, almost longer than my marriage actually.

Along comes the MX Master 3, with thanks to Logitech, DigitalReviews is stepping into the dojo to get acquainted with the new master.

First Impressions
Upon opening the packaging, the MX Master 3 instantly reminds me of the now that I reviewed in April 2019. It features the same nautilus like lines from the thumb rest and around the back of the mouse.

Size wise there is no real discernible differences between the MX Master and the MX Master 3. Channelling upon generations of Asian heritage (those of you who have ever had parents / relatives buy shoes for you from overseas would absolutely understand the subtext here), I traced the MX Master outline on a sheet of paper and sure enough there is very little changes to the dimensions between the 2 mouses.

The major obvious difference at first sight is that the scroll wheels are now both machined steel, gone is the black rubber coating and it feels just amazing. The thumb wheel in particular, is much wider in diameter and longer. The MX Master 3 is now thankfully using USB-C for charging.

On the less obvious changes, the MX Master features a pointed front end whereas the MX Master 3 is marginally shorter and lost the point. My fingers are not long enough to reach the end anyways so it does not bother me. The left and right mouse button no longer slant away from the scroll wheel, there is still a subtle gradual slope but it feels less dramatic. The two buttons that had resided behind the thumb scroll wheel is now relocated to under the scroll wheel, making it more natural to reach. On the MX Master these are the two buttons I use the least (or never to be honest) because it required my hand to essentially disengage from the mouse to activate. But with the MX Master 3, they are rapidly becoming invaluable in my day to day use.

If there is one word that comes to mind as I use the MX Master 3, it is refined.

In Action
It has been a long time since Logitech has release “just a mouse”, every iteration has increased functionality until it is now a Swiss Army Knife level of multi-tool for productivity.

To really leverage everything the MX Master 3 has to offer, the Logitech Options software is a must as it unlocks a wealth of custom options. Every button on the mouse can be remapped to other tasks and functions by selecting it from an image and choosing from a list of options. There is also considerable control over pointer and scrolling functionality. All of these options can be used in combination to create custom shortcuts for specific applications.

For users who are not wishing to deep dive and spend a lot of time customising the mouse, Logitech includes preset profiles for popular apps, namely:

The Logitech Options software will automatically scan your computer for these apps and enable mapping profiles for whatever it finds. It does not find portable apps that are on the system and not running, however, when the application is launched and Logitech Options is running, it will detect the process and allow a profile for that application to be installed if available, otherwise you could manually assign buttons to any application without an included mapping profile.

The default mappings are pretty intuitive, catering to the logical functions that would best suit most users. For example in Adobe Photoshop, the main scroll wheel will pan an image if you hold it down and move the mouse, the front and back buttons will undo and redo changes, the thumb scroll wheel controls the brush size. In a browser the buttons by default would be forward and back, and the thumb scroll is for horizontal scroll.

The Master MX 3 can be paired up to three devices and switch between each one with the Easy-Switch button under the mouse. It has Logitech’s Darkfield Tracking which pretty much works on any surface including glass as long as it is more then 4mm thick, has a 4000 DPI sensor and is Logitech Flow enabled.

Other Features
If you are a multi machine user like myself, the Logitech Flow is absolutely worth setting up. It is a breeze to set up, works across Windows and macOS up to 3 machines. The best part of Flow is the ability to copy and paste from one machine to another, whether it is text, images or files, even between operating systems.

Logitech claims up to 70 days of use on a full charge, and 1 minute of charging on the USB-C port will give 3 hours of use.

Gripes
I still like the 3 dots battery level indicator of the MX Master, I feel it works better as an indicator of battery status than a single LED.

Not so much for the MX Master 3, but the features and functionality here really makes the MX Vertical pedestrian and limited in ability.

Conclusions
The Logitech MX Master 3 is hands down one of the best mouses I have used. It is a bit of a travesty to call it a mouse, when it is capable of taking productivity to the next level by virtue of customisation. When viewed in the light of a productivity aide, particularly for power users of Office Suite or Adobe Creative, then the sticker price of AUD$149.95 is far more palatable. The MX Master 3 is widely available now, there seems to be some leeway with the price with some retailers.