To give you an idea of where this product stands relative to ATI’s current line of next generation graphics chips, it begins at the entry-level with the X1300.  At the midrange, is the X1600 series.  The X1800 and X1900 series is where we progress to the higher to highest end graphics chips on the market.  The X1300 is an entry-level graphics card which incorporates the latest Shader Model 3.0 technology to allow you to play the latest games.  At this level, it is a matter of the kind of performance and features is offered at the budget price.

The box immediately list the features and important points of the product.  The item on the list which caught my eye was the statement “Windows Vista Ready”.  Those who are future oriented about a product they buy can be safe to say that this card will work with Microsoft’s upcoming operating system Windows Vista.

Finally, we get to look at the card. These are the specifications of the graphics card as obtained from PowerColor’s website:

Unlike other graphics card manufacturers, PowerColor has largest variety of different graphics card for each series.  Even though this is the PowerColor X1300 graphics card, PowerColor also offers the X1300 Pro and X1300 Pro Bravo Edition.  The X1300 Pro is different in that it has a core speed of 600Mhz and an effective memory speed of 800Mhz.  The Bravo edition takes it a step further by including VIVO support and faster GDDR3 memory as opposed to just DDR2 memory.

The graphics card looks like your typical graphics card with a heatsink and fan.  A fan is necessary probably because of the faster core speeds relative to older generation cards. 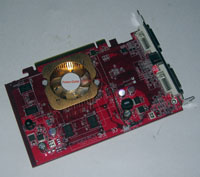 When I installed the card in my PCI Express slot, I immediately noticed the two DVI connectors on the card.  If your monitor uses a VGA connector, don’t worry.  You can use the provided DVI to VGA connector to allow you to connect your monitor to your video card.  An S-Video to composite cable has also been provided if you wish to take advantage of the S-Video output on the card.  The two DVI ports allow you to connect multiple monitors if necessary making this card versatile for many users.

By experience, I can expect this card is definitely not for gamer if they wish to play games on high detail settings.  Anyways, I first tested the card under 3DMark03 to find out how well it could handle the various benchmarks.  The graphics card was able to handle the tests quite smoothly.  It scored reasonably at 4030. 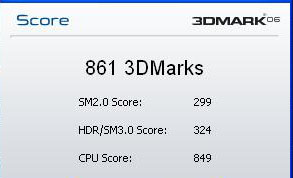 Next, I used 3DMark06 just to find out how well it could handle it.  It had a lot more trouble in this test.  The majority of the time, it would stay around 5 frames per second or less.  I didn’t expect much from this benchmark given the entry-level nature of the card.

The next part of the test involved some real tests in gaming.  I tested various games such as Call of Duty 2, Need for Speed Most Wanted, Doom 3, etc.  Based on the performance of these games, I came to the general conclusion that this card worked well under 1024 x 768 resolution when the game was at its lower detail settings.  If I wanted to increase the detail level a lot, I had to sacrifice the resolution down to 800 x 600 or less.  For example, Need for Speed Most Wanted was able to play smoothly at 36 frames per second.  When I increased the detail level, the cars looked a little more detailed as well as the environment of the track.  In that case, the average framerate dropped to an average 15 frames per second.  In Call of Duty 2, I let the game automatically configure the best settings based on my system.  It chose a resolution of 800 x 600 with 4x antialiasing.  The game was still very playable at an average 18 frames per second.  When turning off antialiasing as well as some of the detail settings, the game was much smoother again.

Conclusion
Even though I am used to midrange graphics cards or above, I was very impressed with the kind of performance this entry-level card has to offer.  This graphics card basically gets the job done for most computers with some gaming.  If you like to play the latest games old or new but are very budget-conscious, this graphics card has a lot to offer.  You can even consider PowerColor’s alternative flavor of the X1300 if you are looking for a slightly more powerful version of the chip.  This graphics card will certainly not offer the high visual quality in games that higher end graphics card offers, but you can generally expect smooth performance at low detail settings at a resolution of 1024 x 768.