A Great Update: The New DJI Phantom 2 Vision Plus Version 3.0 – Part I 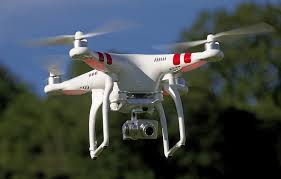 There is excitement in the air and quite a buzz this time before Christmas as thousands of props are stirring and whirring as drones take to the skies…
It will be a lot busier after Christmas when thousands of new drones join the swarm. Many of these cost just a few hundred dollars or much less still. But for people with serious photography or video in mind there are very capable UAVs available today from the likes of DJI and their Phantom range.

Today we’re looking at what is probably the best upgrade of the Phantom Vision since we reviewed this model about a year ago.
Let’s have a look at what is new in this segment which will be followed up a few weeks later with some video footage to show off its capabilities.

The Phantom Vision was a huge success because for the first time a quadcopter became available at a reasonable price for the consumer market which featured an integrated camera system, rather than have an action camera like a GoPro strapped onto it.
We reviewed the Vision, also in two parts, here and here.

Whilst it was an amazing product it did have its flaws: for photography it was great if you could do some postproduction, like lens correction and horizon tilt. For videography it was pretty hopeless, particularly on a windy day when the camera would move with the machine leading to shaky footage.
In forums worldwide there were a lot of people going for aftermarket 3-axis stabilisation gimbals which would allow the camera to be very stable, irrespective of attitude of the machine.

DJI is a very innovative company and are certainly forerunners when it comes to making gimbals. See for instance the Ronin which can take full-size cameras.
So it was pretty logical for DJI to incorporate their own gimbals in their consumer products.

The Phantom 2 Vision Plus Version 3.0 has a new camera system compared to the reviewed model we had earlier.

This is a very lightweight unit, consisting mainly of the lens because the lighter the camera is the better it is for the gimbal to work with.
The real magic of the new Phantom is essentially this 3-axis gimbal which keeps the camera lens unit perfectly stable, no matter the wind conditions or manoeuvring that you are doing.
It’s just about Hollywood stable which is tremendous for viewing.

The camera itself does full HD, that is 1080p 30 frames, or 720p 60 frames for clean slow motion and takes 14 Megapixel stills, which are recorded on the on-board 4GB Micro SD Card.
A great improvement is also that now the camera can be tilted downwards completely so that you can take true vertical shots.

On my previous Phantom I installed a vertically mounted BlackVue Sports action camera to take the vertical images but it added extra weight and complexity to the shooting.
As with all previous models the Phantom Vision is able to beam photos and video straight to your phone via the long-range Wi-Fi component. This has an improved range of up to 500 m.

Similarly, all the important flight data, like battery life and altitude and distance from you, are also transmitted to your monitor (which is usually your phone with the DJI Vision app installed).

Another recent useful feature is the ability to plan your flight missions with up to 16 waypoints so that your Phantom will autonomously fly this route.
As a commercial pilot I am pleased to see that the Vision has a database of all the major international airports which doesn’t allow you to take off within a 5 mile radius of the airport. This doesn’t mean that manned aviation is protected from the stupidity of folks who want to fly their drones higher than the legal limit of 400 feet and beyond the line of vision. But it is a step in the right direction for increased separation of the two types of aviation.

Even though it’s hard to tell the models apart as the basic shape is still the same, there are some improvements “under the hood” with the more powerful engines (by a whopping 33%, no less). That also called for new motor controllers plus new propellers with greater lifting power. You might have seen the video where the new model is lifting up three other – albeit empty shells of – Phantoms! Generally, extra power cuts into the endurance but the current model is still able to deliver about a 20-25 minute flight endurance, which is very good.
Not that you would notice it but we also have a new compass which is better protected than before.

Another major component that has been given a good overhaul is the controller.
It now has a USB rechargeable battery, rather than the four AA batteries and it has a battery level LED.
There is also a new trainer port which you can use to fly in simulation mode.
The handiest upgrade here is a tilt angle dial on the left so now you can control the tilt of the camera which you had to do with the smartphone app before.
So there you have it: all the main changes and new features in a nutshell.

With all the different types and models in the Phantom range it becomes a bit hard to differentiate them all. There should be an easier way to indicate which model we’re talking about.
Just look at the model naming here: DJI Phantom 2 Vision Plus Version 3.0….
Let’s now go to the set up.

Getting Ready to Fly

The Phantoms are classified as RTF (Ready to Fly) models.
Well, that is a bit of a stretch for a number of reasons. Particularly if you’re a novice in flying these types of drones there is a fair bit of reading involved of the manual and getting familiar with the procedures and the system. Unpacking and putting all the components together is easy but likewise takes a bit of time. And then you have to charge up the main battery, the Wi-Fi unit and the controller. And to make sure that your own phone is fully charged up!

Whilst everything is charging up, you can read the manual and can hook up the Phantom to your computer for the latest software upgrades. This has become an easier process now that the new controller finally has a USB port for upgrading about five or six different bits of equipment.
Fortunately, DJI has frequent updates and upgrades with new features.

After we had done all the pre-flights and calibration it was just a matter of waiting for the obligatory six satellites to get a solid fix.

Lift-off was very positive and smooth. What surprised me was that even with the more powerful engines and redesigned propellers noise levels seem to be decidedly lower than before. That is always a win for everybody!
I am pleased to see to that they have implemented the height restriction, which stopped the bird just about 120 m high, which also keeps it within line of sight.

Even though it was quite a windy day the Phantom kept an even keel and the camera even more so.

There was one last surprise in store when I was guiding the machine about 100 m from its initial launching point and the battery was running low. I was just hovering the Phantom at knee level before the last landing when suddenly it shot up 20 m and flew back to its starting point whence it made a slow descent, landed carefully and shut down its engines. That is a great feature but you have to be aware of that or uncheck that in the Settings.

I also discovered that there’s a Dynamic home point these days: when using a GPS-enabled mobile device and running the Vision app, the Home Point will automatically be reset to the location of your phone every 2 seconds during flight. Again, a great improvement!

So in all it was great to be in the air again with an improved bird.

In the next instalment we will talk about some other software features like the ground station for flight planning and we hope to have a video for you.
After all, this is billed as a flying camera and much improved video is the name of the game. 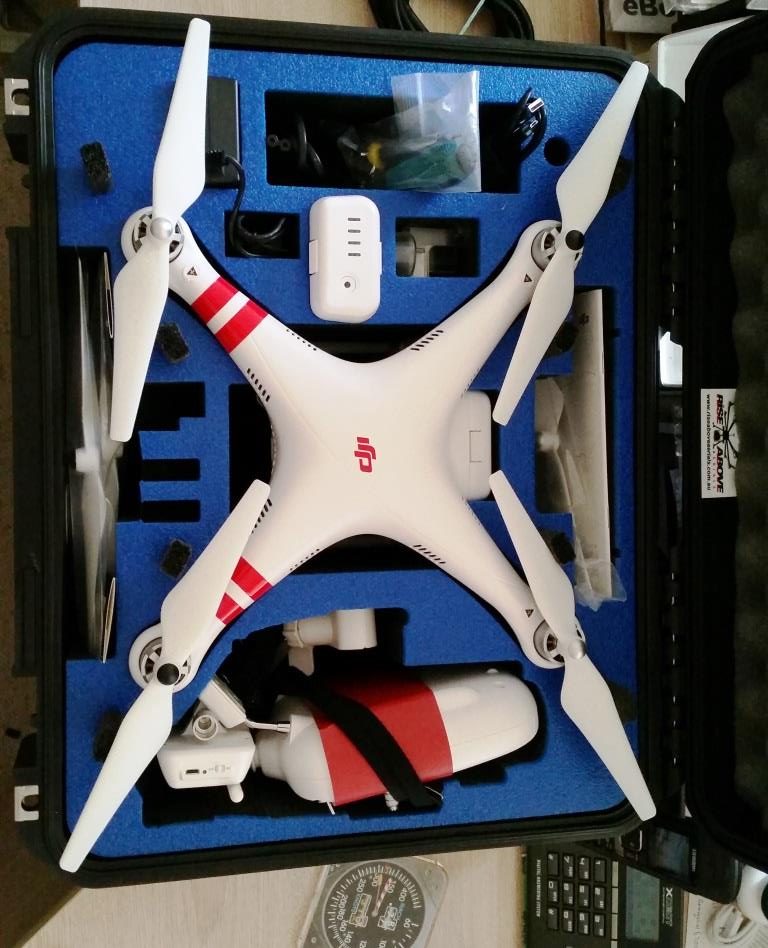 We are very impressed with the Phantom 2 Vision Plus Version 3.0.It has been an evolutionary path for the Phantom series and DJI is arguably one of the better drone companies.

We acquired this latest version of the Phantom 2 Vision Plus from Rise Above Aerials which has a huge range of UAVs for consumers and professionals.
Because it is a fairly complicated piece of machinery (yet very easy to fly) it is important that your dealer is responsive to your needs and queries.

If you are considering getting yourself a drone, now might be a good time as they just dropped the price $110 on these particular models. The price for this Phantom with extra battery was just shy of $1900.
If you are a complete novice I would advise to start with a much lower priced model to get the hang of flying.

Have fun but be safe!