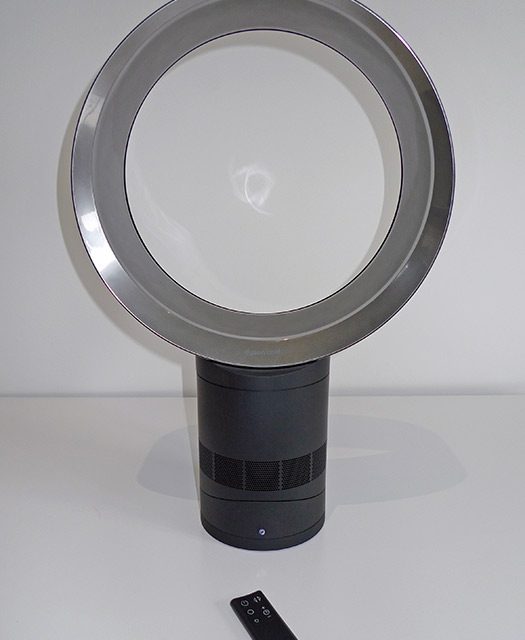 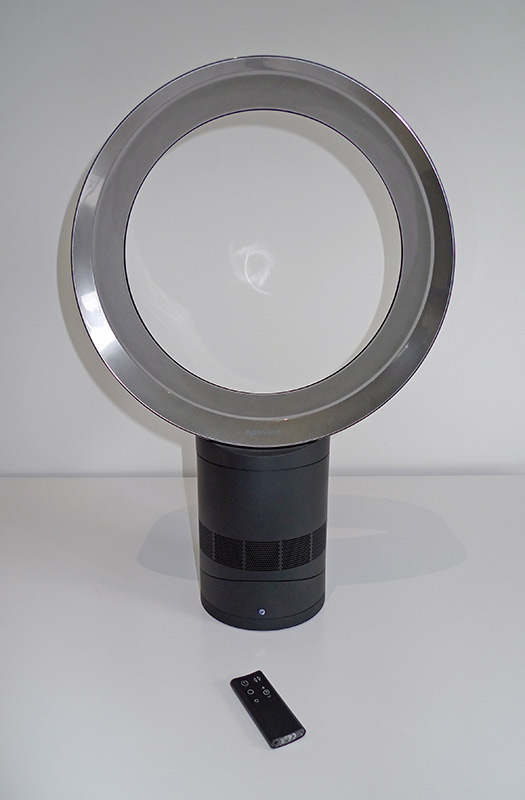 While Dyson’s crazy air multiplier design has been around since 2009, it still boggles the mind of most who has sit before one. Where there should be fan blades, there is nothing but a large hole! Does it run on mains power or on voodoo?

After two months, we’re still not entirely sure.

Back in 2013 we reviewed Dyson’s Hot+Cool and very much liked it. While not able to heat a room, the new AM06 builds on the voodoo air multiplier technology by incorporating a quieter design and a reduced energy footprint. 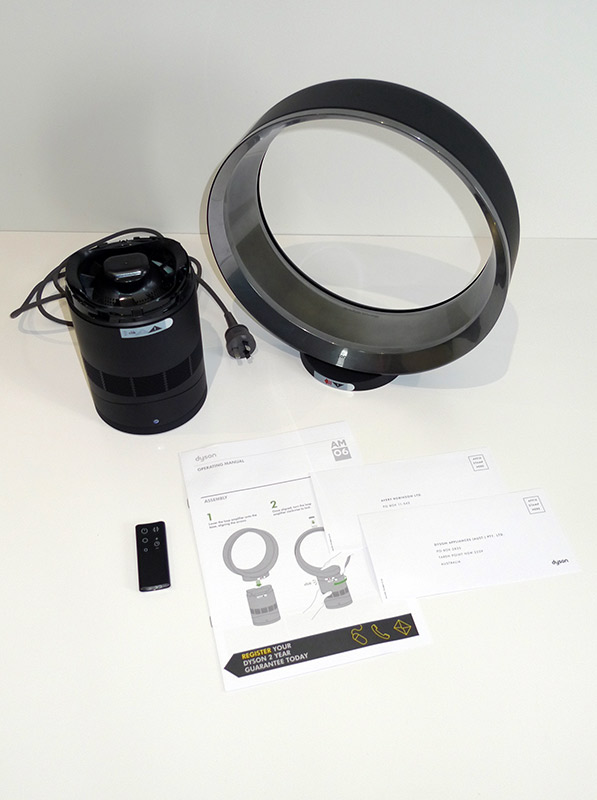 Other than the remote control, the fan comes in two pieces which require assembly before use. The circular impeller is very light and the bulk of the unit’s 1.8kg is in its base.

Assembly is very easy and consists of clicking the circular impeller onto the cylindrical base. Along with the pictorial instructions in the manual, two small removable stickers on the unit itself put even the most paranoid assembler at ease.

The AM06 stands 55cm high and the base has a diameter of 15cm. As its name subtly hints, the units impeller is 30cm wide. 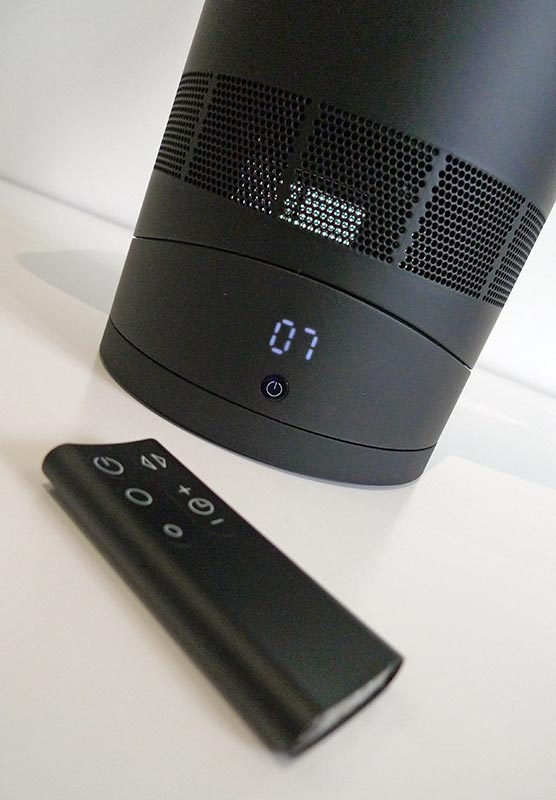 While its base looks similar to the previously reviewed AM05 Hot+Cool, the AM06 features a circular impeller (as opposed to an ovoid one) and does not require the AM05’s additional stabilising plate at its base.

The base has a small power button on its front which cleverly doubles as an IR receiver window. Above this button is the AM06’s two digit LCD display which is invisible when not in use. Above this, an unobtrusive set of vents wraps the AM06. Beyond three neat (tilt) edge lines and the 1.8m power cable protruding from its rear, the base is both clean and neat.

Like the base, the remote has a velvety plastic quality which feels quite elegant in hand. The six buttons are well set out with easy to understand symbols: Along with a power button, fan speed and oscillation buttons, the AM06 remote has two more buttons to configure a timer function. When not in use, the remote sits neatly atop the impeller on a stealthy magnetic perch.

Once placed in a suitable location and plugged into the mains, the AM06 is operated solely from its remote control. While having an array of buttons on the base (ala AM05) might’ve been a handy fallback, we like the minimalism Dyson have employed – Just don’t lose the remote! 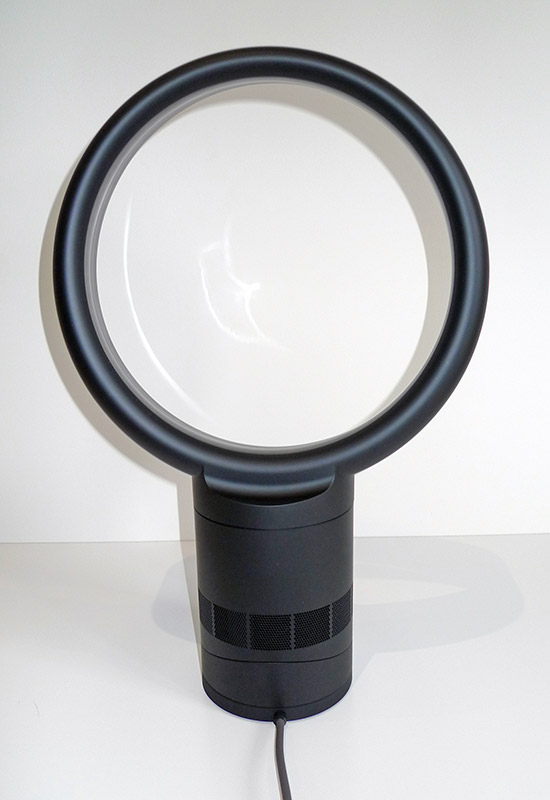 In day to day use, the AM06 performed flawlessly, effectively producing a cooling breeze of air. Of course, like a conventional blade fan, the AM06 doesn’t physically cool the air in a room but moves it around to create a wind chill affect. We’re still not ruling out voodoo, just not that kind of voodoo!

The speed has ten steps, from mild to a significant movement of air. While the highest setting produces a strong breeze, it is not the most powerful fan we have seen. As Dyson attest, the fan is indeed quiet and while it is not silent, at lower speeds it produces a good amount of air for very little noise. In A-B testing, we found the AM06 to be audibly quieter than the AM05 at similar speeds. 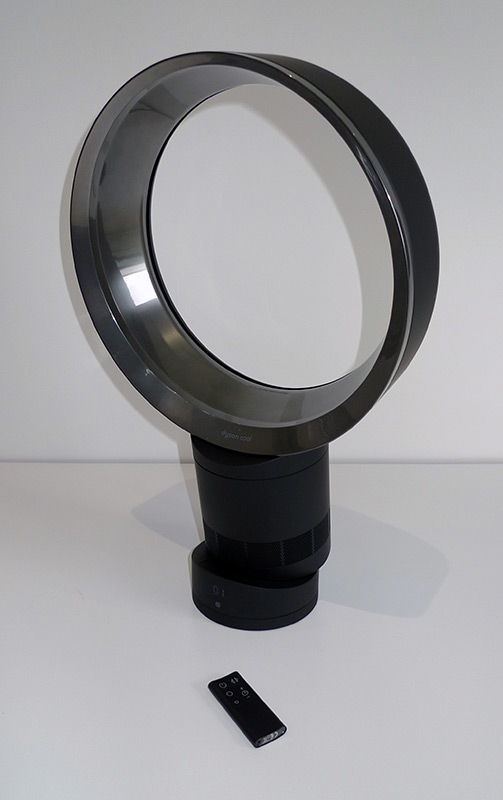 We found no delay in using the remote control and the whole experience was great. Speed setting changes were instant and displayed on the base LCD display accurately.

New to the AM06 is the built in timer function which automatically shuts the unit off after a user defined amount of time. The timer can be set from 15, 30 and 45 minutes, right through to 9 hours (in hourly increments). The timer function worked as expected and with only two buttons advancing or reducing the amount of time till shut off, was dead easy to set.

While we used the unit in a number of spaces, with its low noise and timer functionality, we found the AM06 perfect for getting to sleep on the few balmy nights Melbourne has given us.

The AM06 is able to be manually tilted approximately 10 degrees both forward and backwards and using the included remote control, the unit can also be set to oscillate around 80 degrees horizontally. As with the AM05, the tilt function felt (and looked) a little odd but otherwise operated as expected. We found the AM06 to be very stable throughout testing which is likely due to its relatively low centre of gravity. 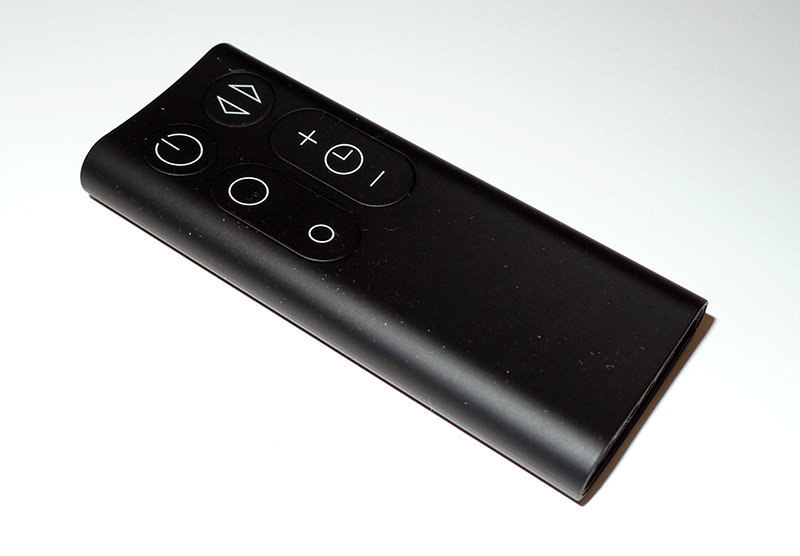 Also, worth noting is that the AM06 remembers the previous speed setting between uses but does reset oscillation to “off” and clears the timer function once turned off.

HOUSTON WE HAD A PROBLEM

Actually, we didn’t have a problem with the AM06. As we mentioned earlier, throughout testing, we had zero issues with the AM06 and it performed flawlessly. A little while back, Dyson did however, discover a problem in the previously reviewed AM05 model. 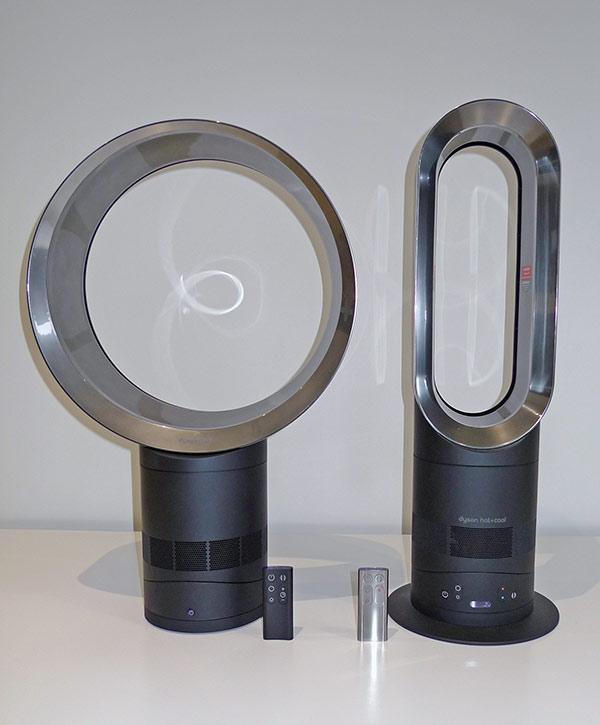 What they did next was to become an exemplar of how product recalls should work. Firstly, as the unit was registered, we were notified of the problem by postal letter. A few days later an empty box was delivered to our address designed to safely transport the AM05 back to Dyson, along with all postage and necessary labelling.

A week or so after we sent the AM05 to Dyson, it returned with a note letting us know the AM05 had been repaired, cleaned and was ready for use. While we acknowledge that product recalls aren’t ideal, the way Dyson handled the AM05 problem was spot on. 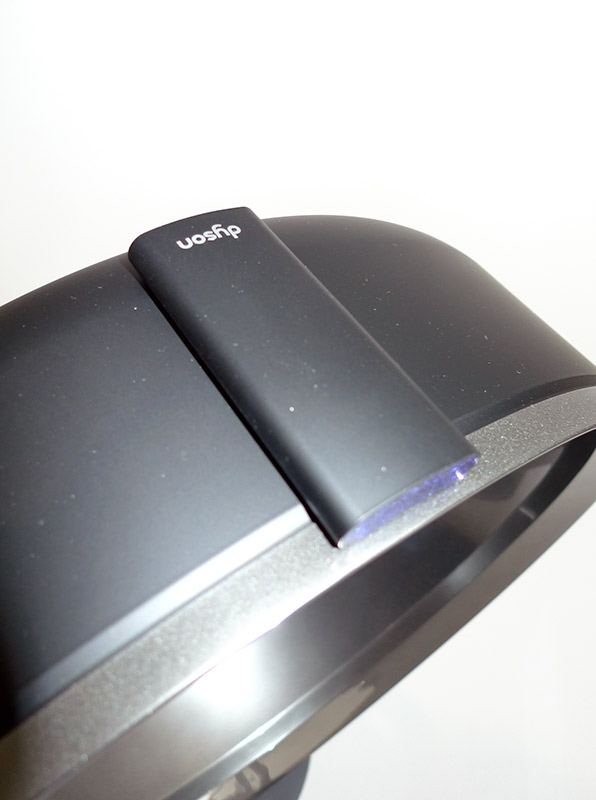 For our money, the AM06 is probably the best fan on the market. It is stunning to look at, it performs its functions flawlessly and along with its timer function, is quiet enough to get you to bed on hot summer nights.

If that wasn’t enough, the after-sale support (as demonstrated by the AM05 recall) is nothing short of outstanding.

Despite its perfect balance of form, function, beauty and maybe even a little voodoo, it’s not especially easy for Dyson to justify the $449AUD asking price. But that’s okay.

The best don’t have to.

The AM06 is available now in White/Silver, Iron/Blue and Black/Nickel (as tested) from the Dyson web store.