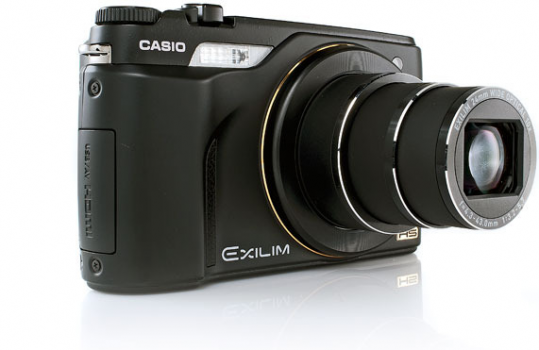 We’re losing count here at how many Casio Point & Shoot cameras we have reviewed over the years: at least half a dozen and, not surprisingly, every new camera that lands on our desk is a great improvement over the previous one with new features and better quality. So it is with the EX-FH100.

Its High-Speed features are the prime attraction here: up to a 1000 fps is possible (with a pretty severe resolution penalty). And if you can accuse Casio of one thing it is that they cater for folks who want to have real fun with their cameras! Not a bad thing either… So what were my findings in the short time I played with this super Slo-Mo unit?

First up: the camera looks very familiar if you have spent any time using a Casio. The layout of all the controls, the menu, the general feel and handling, it all has been honed finely over the generations.

Look and feel
The FH100 is physically much the same as its older siblings as far as size but feels a tad heavier (almost 8 ounces in the old money). In the next image I’m comparing it with a previous review unit, the EX-H10. It has a different layout of the controls on the top and the back, primarily because of a different feature set. The rotating dial on top has a Manual mode as well as the Auto, Aperture and Shutter mode in addition to an expanded Best Shot mode that you find on all Casio P&S cameras. The shutter button has also a zoom toggle. On the back the noteworthy addition is a switch for normal and high-speed video. Oh yes, the right side – where the USB/AV port resides – now also sports a welcome (mini) HDMI Out port! The rest is pretty similar to the H10, right down to that brilliant 3 inch screen and great battery life (easily more than 500 shots which means you can probably leave your charger at home on short trips). Looking at the optics: we have a 24-240 mm lens with an aperture range of f3.2-5.7. That means there’s a lot of wide angle and a bit less on the tele side in this 10x zoomer
The FH100 moniker most likely comes from the 10 x zoom multiplied by the 10 MPs…although, technically it’s a 10.1MP sensor… So there goes my theory! 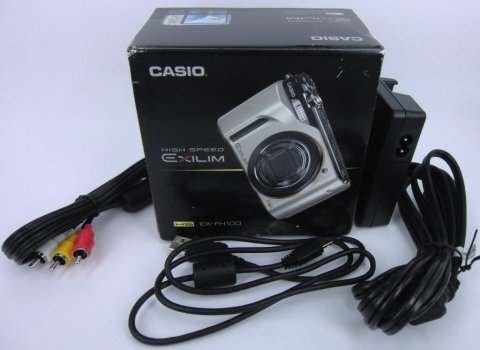 Let The Fun Begin!
I won’t go over the photo side of things again: have a read of some of our previous Casio write-ups. Summary: in this P&S category Casio has nothing to be ashamed about! Noteworthy with this camera is the ability to save your images in RAW or DNG. If you don’t know what that is – don’t worry, you don’t need it… However if you like to do a lot of post-editing on your computer and have programs like Adobe Lightroom that can do a lot of magic stuff with DNG and RAW files, you’ll appreciate this functionality. There’s also a dedicated HS button on the top for taking a bunch of High-Speed still to capture that one money shot… Let’s go straight to why you’d buy this camera: the high-speed functionality. We did the usual videos most folks want to do with this type of camera – play with the dog, prick balloons, watch birds and butterflies fluttering by. And it really is fun to do! Below is just one sample.

Now there is a big trade-off with speed and resolution. Don’t expect a Mythbusters type of experience in HD. Instead, VGA is probably the most watchable Slo-Mo experience on the FH100. For instance, 120 frames per second gives you a 640-by-480-resolution video. If you really want to crank it up to 1000fps expect just a narrow sliver on the screen of 224-by-64-resolution. Still, for some experiments it’s quite nice to do. Have a look at the super high speed of 1000fms in the following clip:

Conclusion
Not surprisingly, the Casio EX-FH100 is a bit more expensive than most other Point & Shoot cameras. At a list price of $350 (USD) it’s pricey but this is a great all-round quality camera that will give years of joy, even when the fun of shooting everything at high-speed has worn off a bit.

On the Negative side:
Saving images in RAW mode takes fairly long
Focus is also taking too long when zooming.

PS Stay tuned for our next Casio review on the G1. Staying with its theme of bringing us easy-to-use cameras with fun features, Casio is catering with this G1 camera to the watersporters. And, yes, we’ll be trying this one out under water as well…

Have a look at the full Specs on the next page.