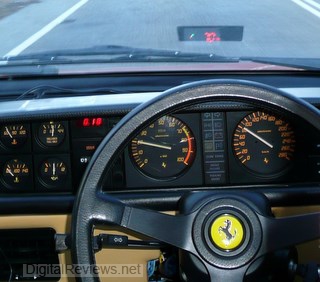 Here is the second instalment of our review of the HG-100 Speed Meter from GlobalTop. In Part One, published last week, we gave you the unboxing and modus operandi -how it works- of this Head-Up Display. Now we will talk about the installation, test drives, availability and the all important Value for Money factor.  And, oh yes, one of the test vehicles was a 1986 Ferrari….

Installation
Installing the Speed Meter is fairly simple but not as easy as chucking a bluetooth GPS receiver on your dashboard.  Correct placement is important so that the projected speed can be read in your line of vision.  The device needs to be placed flat on the dash.  In most cars this is not a problem; in our Ferrari with its wedge shaped dashboard it was a challenge.

By the way, when I say our Ferrari, I am a bit of generous with reality.  This beautifully restored motor vehicle belongs to a friend of mine who has half a dozen classics, such as a powerful Cobra, an MG, a Dodge Charger, etc.  The Ferrari Mondial Quattro Valvole (doesn’t that sound beautiful?) is your typical sunny Sunday afternoon car: you wouldn’t want to drive it too fast. Why? To give as many people as possible neck pain as their eyes try to follow this growling monster as it roars thru the ‘hood…
We went for a quick installation, meaning we did not follow the instructions.  There were a couple of reasons for this: it was more about the photo shoot opportunity and not the permanent installation that I would have in my Ford Falcon.  Also, we didn’t want to mess up or alter the beautiful interior.  That’s right, a good installation requires splashing around with a bit of soapy water and trying to hide some cabling.  The Speed Meter kit comes with an iron base plate that the magnetised HG 100 can securely sit on.  The plate is attached with a piece of double sided sticky tape.  Directly above this you need to affix a small rectangular piece of reflective but transparent tape.  Initially from the photos that GlobalTop supplied it appeared that this bit of plastic was very dark.  Fortunately, in real life, while still noticeable from all angles, you get used to it pretty quickly.  I also tried to see how it would work without the reflective plastic and under most conditions you can get away with not having it.

In the Ferrari we tried to put it on without using any soapy water to easily smooth out air bubbles in the plastic.  That doesn’t work too well.  Soapy water is the answer.  We also had to place the Speed Meter at an angle on the wedge shaped dash but that worked out OK as the windscreen was raked back steeply as well.  After plugging in the power to the Head-Up Display the mid-shipped engine roared to life.  Yes, it’s not only the Ferrari’s looks that draw attention to it!

Testing the Speed Meter
The numbers in the windscreen were easy to read as we wound our way out of town to find a piece of flat bitumen to try it out at the maximum speed.  That is the legal maximum speed, not the Ferrari’s top speed at well over 275 k’s…

As a charter pilot I fly a pressurised Cessna Centurion in daily life so I am used to those sort of speeds but, not in a car.  I don’t have the need for speed or a death wish…  Besides, the unpredictable kangaroos around here have a habit of making mincemeat of themselves at the expense of your wallet, if you know what I mean.  Just check out the many roo carcasses on our rural roads!

So we cruised along at a sedate 110 kmh, enjoying the throaty ride and checking the calibration of our speed machine.  Well, what do you know?  The Ferrari is also slightly generous in indicating speeds: it was easily 10 to 15 slower than indicated.  Not that it matters because there is plenty more in reserve…The next day I installed the Speed Meter in my Ford Falcon, this time using the soapy water, the base plate and cabled it up.  There is plenty of cable to go the long way around if you need to.  Let’s be honest here: it’s not easy to find a flat bit of space on a modern dashboard.  I had to fiddle quite a bit to arrive at a semi workable solution, also because the windscreen is curved and raked back.  That required the unit to be tilted back slightly in order to project more clearly.  One other aspect you have to be aware of: in order to actually read the numbers you need to refocus your eyes from the road far ahead to close by.  It would have been better if the numbers were projected into the distance.

My first drive was at night and the auto dim worked a treat: the LED display wasn’t too bright as I had feared.  When the Speed Meter first starts up and a position fix has not been acquired yet the unit displays the letters GPS and changes to the current speed once the position has been determined. One of the handy functions on the HUD GPS is the Speed Alerter.  As mentioned in Part One, the Speed Alerter can be set at 10 K intervals.  I set mine at 110 KPH, the maximum speed limit here.  If we’ll pass that speed the display starts flashing the current speed.  There is no auditory alarm but this alone is quite effective. We checked the Bluetooth functionality with several mapping programs: Co-Pilot Live and OziExplorer. It’s quite easy to set up a bluetooth connection and the HUD GPS pulls in the sats quite quickly. For good measure we also mounted the GlobalTop Chase 750 Navigator which uses Gate5 maps for Australia which are excellent. More on the Navigator in a separate review.

Battery life
For normal use in the HUD mode the Speed Meter is always powered so battery life is not an issue.  It’s only when you take the device with you outside of the car that you would want to know the endurance. At the moment 10 hours staying power is what you can expect but GlobalTop is working on a longer battery life as well.

Conclusion
It still takes time to get used to the display in your line of vision.  Some people would not be enthralled by that and that’s OK.  Others don’t need or want to be reminded of their speed all the time and that’s fine too.  The HG-100 Speed Meter from GlobalTop gives you that option and lets you just use it as a standard bluetooth GPS receiver sitting unobtrusively in a corner of your dash.  At just $100 retail I feel that you are not being charged for the extra features and it is a brilliant GPS receiver in its own right.

Availability and Giveaway Opportunity
The Speed Meter is available now in various European countries, particularly in the UK, France, Italy and the Benelux countries.  Availability in the United States depends on finding a good distributor and the same applies to Australia and other countries. If you feel you can’t wait to pick up your own Speed Meter, GlobalTop has graciously made available 10 of these units to readers of the DigitalReviews Network.  That would give you the opportunity to make up your own mind on the usefulness of this technology in your car.

I must acknowledge that it will be hard to develop a Head-Up Display that can easily be accommodated in all makes and models.  There are just too many variables.  However, the alternative, a purpose built HUD for your car, is a whole lot more expensive…

Where is this technology heading?  The next logical step for GlobalTop and other players in this industry would be to develop a Head-Up Display with integrated mapping.  Now that’s a thought…

So what must you do to score one of these Speed Meters?

We have noticed that many other News and Review sites have linked to us for this particular product review.  We appreciate that and would like to reward the readers of those sites as well.  That’s why we would like to make available five of the Speed Meters to readers of the 5 highest referring sites.  To qualify, click on this link , which will take you to our Giveaway page.  Fill in your first name, a valid email address, make and model of your car, which blog you read this on and you’re in the running!  The Giveaway ends on May 31 at midnight.

There is just one favour we would like to ask: let us know what you’re thinking of the device, take some pictures and we would like to post them on our website as the final, the people’s, verdict.

All Speed Meters will be shipped directly from GlobalTop in Taiwan within a couple of weeks of the end of the Giveaway. 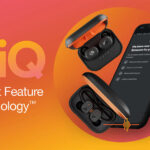