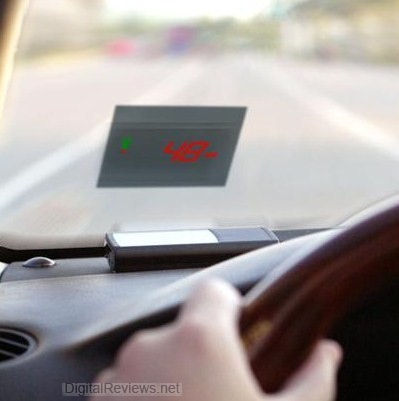 DigitalReviews.net brought you the initial announcement of GlobalTop Technology’s fascinating Head-Up Display a few months ago and we follow that up today with our scoop review of the HG-100.

It’s one of the more innovative GPS products we have seen lately as it combines a Bluetooth GPS receiver with speed alerts and projects your speed and direction onto your windscreen.

Plus it works with the navigation software on your Smartphone or PDA!

This enables you to keep your eyes on the road when it is most needed and that’s why we are testing this on a Ferrari.

Buckle in and come along for the ride! 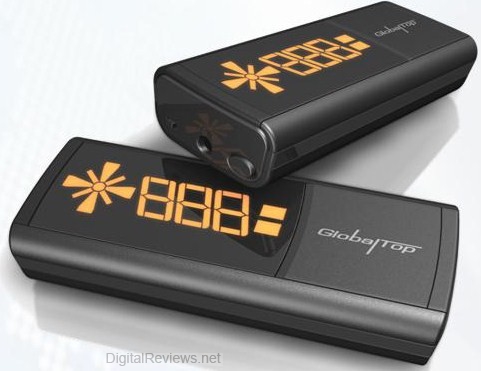 This is Part One of the review where we do the unboxing and give you our first impressions and have a look at the technical aspects of the Speed Meter.  Part II will have the installation and actual testing.

The HG-100 is a small unit, not much bigger than your standard Bluetooth GPS receiver.  The large display on top comes to life impressively in a swirl of flashing red and green LED segments when you first switch it on.  The mating ritual then starts in earnest with the LEDs furiously blinking, trying to connect to mapping software via Bluetooth and establishing a GPS fix.

GlobalTop has designed this unit to work with your PDA or Smartphone running navigation software.  This way it can take directional guidance from these units and project it on your windscreen.

The HG-100 can also work in standalone mode, functioning as a GPS receiver, projecting your current speed in miles or kilometres with a heading indicator. The HG-100 has also an Over-Speed Alert function whereby you can set your speed and get alerted before the boys in blue catch you speeding…

Finally, the unit can also act without projecting anything at all and just be a quiet Bluetooth GPS receiver.  You can either choose this mode manually or it will automatically switch off the display when power is disconnected.

Yes, this means that in order for the HUD to display anything at all it needs to be powered from your cigarette lighter.

GlobalTop, also known as G.Top or f-tech, has made a name for itself in GPS technology.  We have earlier reviewed some of their gear, notably a couple of solar GPS receivers.  The Speed Meter is a well built unit, aesthetically rather pleasing (after all it is just a stick-like device!) and comes complete with all you need.  Just have a look at the picture to see what comes in the box.  Interestingly, this particular review unit was unbranded, which means that GlobalTop will be an OEM manufacturer for this device as well.

The GPS chip is based on MediaTek architecture, providing 32 channels satellite tracking.  From previous tests the MediaTek chip is a good performer, much like the SiRFStarIII.  I have some specifications in the box below.  The acquisition times are pretty impressive: 1 second for a hot start and just 36 seconds for a cold start.  These figures don’t apply of course when the car is still parked in the garage!

We will talk about installation and placement of the device later on in Part II but it is clear from the pictures that when operating as an head-up display the unit has to be facing you with the display on the left-hand side and the LED indicators away from you.

That still poses a problem which is generic with a lot of GPS receivers: the distraction by constantly blinking lights.

I have written about this plenty of times so let me recap. The LEDs are rather bright. That’s OK during the day but when you’re driving at night the flashing lights are quite a distraction.

Why draw attention to the unit by blinking if everything is OK?

There are some other idiosyncrasies as well: we all know that a blue light indicates a Bluetooth connection and standard practice generally assumes that the green light denotes a GPS fix.  Not so here.  If the green light blinks with a 3 second interval the battery is getting low.  If it blinks with just 2 seconds interval it means the battery is charging.  Can you readily tell the difference??  How about the red light?  When it lights up continuously it’s acquiring satellites, when it blinks everything is hunky dory…

You may also have noticed from the pictures that it looks like the display image is reversed.  That is indeed the case to display your speed correctly in the windshield.

Because you don’t want to be dazzled by the bright display at night the speed Meter has an auto sensor built-in to dim the display.

On the left-hand side you’ll find the DC-In port, the power on-off button and a small function switch.  Having the charge cable on this side means that this unit is a aimed at the market for right-hand drive if we assume that the cigarette lighter is somewhere in the middle of the dashboard.  In Australia where we have right-hand drive you would not have to loop the charge cable around the unit which can be slightly awkward.

Back to the function switch.

Just like with the power button, what happens depends on how long you press the button for: press it for one second and the HUD will show the setting of the speed unit, whether in miles or kilometres.

Press it just for ½ second and the unit will change the speed unit indicator.

Press it for 2 seconds and it will go into speed warning mode, where quick one second presses presents a series of increasing speed warnings, going up by 10 kilometres per click (similar with miles but also with 65 and 75 stops) with a maximum speed of 200 kmh or 130 mph.  I’m not quite sure we should go that fast, not even in a Ferrari…

However, I could test it out in an aeroplane but the only problem is that aircraft speeds are usually measured in knots.  The nautical mile is slightly different from the statute mile so it would not be very accurate.  It might be a limited market to cater for The General Aviation sector but this technology had its origins in the jet fighters from yesteryear and is commonplace and a lot more sophisticated in all military aircraft these days.

Pilot wannabes will feel quite at ease transforming their car cockpit with the GlobalTop Head-Up display.  It looks cool and if it keeps your eyes on the road it’s gonna be safer as well!

Check us out for Part II where we install the HG-100 in a friend’s Ferrari and put the Speed Meter to the test.  We hope to have this up within a couple weeks.

We will also announce at that time a Giveaway Competition and show you how you can get one of these fabulous devices absolutely free from GlobalTop! 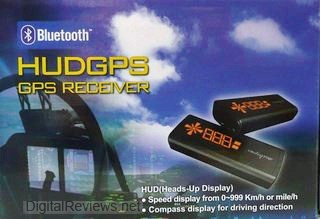 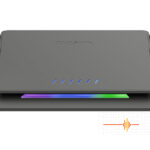 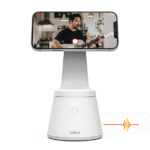