DigitalReviews Network has been approached by Shenzhen ZHC Technology Co to roadtest their latest high definition HDD media player, the i-Box Z400W.  Their approach expresses full confidence in their equipment, and has graciously offered an unit for us to test their faith.  If you have ever considered buying a networked media player, or looking for an upgrade, this is a review you do not want to miss.

DigitalReviews is no stranger to networked media players. A few of our reviewers have had a play at Popcorn Hour and Elektron products.  The i-Box Z400W from the word go already puts itself ahead of the pack.  The Z400W is an unit that you would put in your lounge room alongside your home theatre system rather than putting it out of sight.  With a silver plastic top and bottom and a glossy black fascia, it has a pleasing finished look about it.  The black fascia is kept minimal with two indicator lights, the i-Box logo, an IR receiver window and a power button.  Discreet and elegant are two words that come to mind, far from the industrial appearance that other products we have reviewed previously.

The remote control is also a simple affair with only a handful of buttons.  There was no keypad, just a directional pad and four buttons to support all the features and functions of the Z400W.

Roll the Reel
Beauty is not just skin deep for the i-Box Z400W.  Whereas in the past we have commented that some released firmware have beta feels to them, the Z400W beta firmware has a very finished feel to it.  Technically the firmware on the unit when I first received it was a production release, however there was an updated firmware release not long after.

The menu system is better than those found on Popcorn Hour systems.  When I first saw the remote control I wondered how long it will take for me to enter my maximum security WPA key.  However once I actually begin the setup process I was impressed by i-Box’s firmware implementation.  For starters, character input is done via an on-screen keyboard that displays capitals, lowercase, numbers and symbols in entirety.  There was no need to press any special keys to access any characters which made entering my WPA key a really fast and simple task.  In fact it was far easier than any other gadget I ever had to perform this onerous task with including the Wii, PS3, iPhone, Nokia N95 or the Elektron EHP-606. 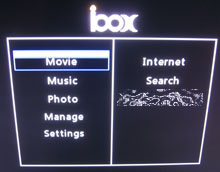 Once the i-Box Z400W is connected to my network it automatically displayed the uPNP enabled devices on my network.  All the shared media that permit to be streamed across the networks shows up via the i-Box ready for playing on the TV.

The videos are streaming via the Z400W works fine with none of the quirks or glitches that was evident in the Elektron EHP-606 implementation.  There were no cut off of sound when the movie starts.  It just works.  The built-in wireless adapter worked flawlessly in my wireless N environment to stream high definition movies.  On files that may have corruption or issues, the Z400W treats it less than gracefully though and stopping playback with a "Cannot play file" error message, resulting in having to fast forward past that section in order to continue.

Under advanced controls you can changed a number of settings, including the size and colour of subtitles which is very handy.  Screen colour and contrast values can also be changed here.

Other features
The Z400W supports direct share drive mapping via NFS or Samba.  The configuration is easy and subject to the security level on the storage side of things.

There is a built-in Bit Torrent client if an optional 2.5" SATA hard disk is installed. The client is controlled via software on your PC which also allows connectivity to nominated websites to get obtain movies via the Download Assistant.

There were a few faults with the i-Box Z400W that I found during my testing.  Firstly the power button does not always fire up the box upon the first press.  In fact an extended press of the button seems to put it into standby mode irrespective whether the device was on or off.

The NFS and SMB support works well, however I would have liked to have the ability to create an alias for each entry instead of having the full nomenclature displayed in the location selection.  Having nfs://ip_address/share displayed generally does not make a lot of sense to a non-technical person, especially when half the line is cut off on the screen on first look.  When the entry is highlighted it does scroll across to eventually display the full information but having an alias would make it easier.

RealMedia format is not natively supported, it requires a supported streaming software such as TVersity which can convert RM/RMVB files to WMP stream.

Fast forward and reverse is a fairly chunky affair with the time line moving quickly rather than a variable speed.  Quite often I find myself going back way too far or vice versa.  Also once you have reach the point in time where you want to go (or believe you should be), it can take quite a while before the video will actually start up again.

Lastly, the firmware update progress is slightly heart pounding.  There was no real warning about the process I was about to undertake, no progress bar to indicate that anything is really going on.  I had to wait and hope for the best.

Other Information
This review was written based on firmware version 5.00.053.  It should be noted here that the i-Box Z400W uses a custom firmware, rather a Syabas based NMT.  i-Box is constantly working to update the feature set on their firmware and I understand that a new release is imminent with the following functions:
* ISO files fast forward (max. 16x FF)
* chapter selection for DVD files
* bookmark function
* updated (advance) "Ctrl" interface

Interestingly enough by sheer accident, I discovered that the i-Box Z400W can actually remotely start and stop the rangehood in my kitchen (I didn’t even know my rangehood has that feature!).  That actually means the remote control has a very decent range as that is a good few metres behind where the Z400W is set up with my home theatre system.

The i-Box Z400W is certainly an impressive media player.  Whilst the chipset are shared across the competitors, the i-Box firmware implementation puts it head and shoulders above the Popcorn Hour and the Elektron.  I repeat what I said earlier, the other devices we have tested at DigitalReviews had a beta feel to them, the i-Box Z400W is a finished product.  The unit feels solid in build and the firmware is robust.

The i-Box Z400W is available here for USD$249.00, here in UK and Ireland for £209.99 inc VAT, or here in Australia (no price listed).  For readers who does not require the wireless component the i-Box Z400 has the same feature set but without the wireless capability.  Stay tuned to DigitalReviews Network as we will be bringing you another media player review soon!