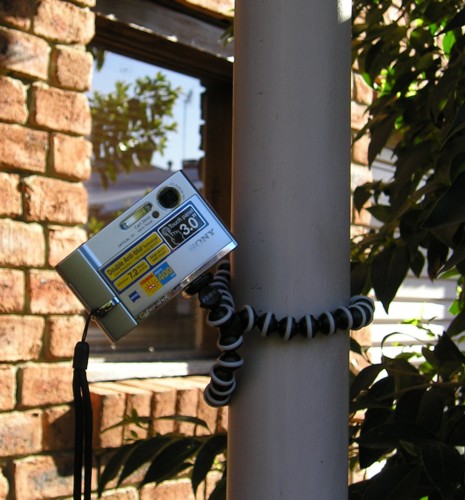 There’s a pleasure that may be had from the simple act of placing a gadget on a table and watching someone’s brain kick into gear as they realise what its purpose is.  The Joby “Original” Gorillapod garners the lion share of attention as I parade it past a few photography aficionados.  There are plenty of bragging rights to this gadget.

The Gorillapod is a camera tripod with a “twist”  – literally!  Lots of twists in fact.  Instead of straight barrel legs, each leg is composed of 9 articulated ball joints, each capable of bending ~45° and rotating 360° to provide unprecedented flexibility and support for taking the perfect photo.

Despite the "pod" suffix, the Gorillapod bears no relation to products from that "fruit company" based in Cupertino.  Even before I attach it to my camera, I am already thinking back to the numerous trips I have made and wishing I had had this in my gear pack. 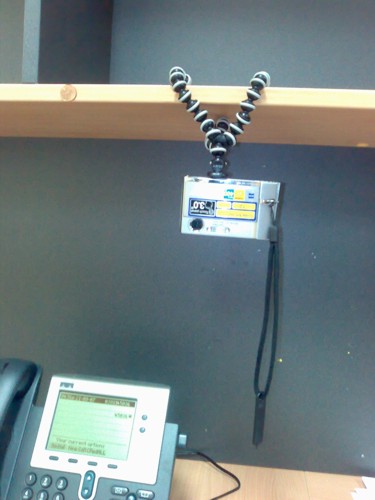 Wow!  That was my response (and everyone else’s who set their eyes on it).  Half the length of a standard ruler and weighing only 45 grams, it looked like gorilla fingers in a funky Spiderman glove in the palm of my hand.  I must admit the first thing I did wasn’t to check out the build quality of this item, but to start bending the legs into funky arrangements.  That was when I ran into my first bit of mild panic when I heard the “crack” like the sound of plastic breaking.  I was half expecting to see a limp tentacle and imagining having to tell Joby that their product didn’t survive it’s first encounter with me.  The good news is that Gorillapod is made of tougher stuff, it was just loosening up from manufacturing stiffness.

The Gorillapod is a well thought out product, incorporating all the standard features of a good tripod in a tiny package.  There is a tiny quick-release plate that measures approximately 18 x 22 x 3 millimeters, with a standard 1/4" thread suitable for all standard compact cameras.  A discreet locking mechanism activates by rotating the top ball joint that prevents the camera from being released from the tripod by accident.  Each ball joint has a rubberised ridge and rubberised feet to achieve the best contact with whatever you chose to wrap it around.

Without my camera handy, I did the next best thing I could to see just how good the gripping power of the Gorillapod is.  I wrapped it around the top of my steering wheel and went for a drive.  Granted that it is probably not the usual spot to plant a camera, but before I trust a few hundred dollars worth of equipment to a precarious perch I want an idea of just how stable it is.  To set the scene I have a leather steering wheel in my chariot and once I learnt to secure the Gorillapod’s legs properly, it hung on admirably through all the sharp corners. 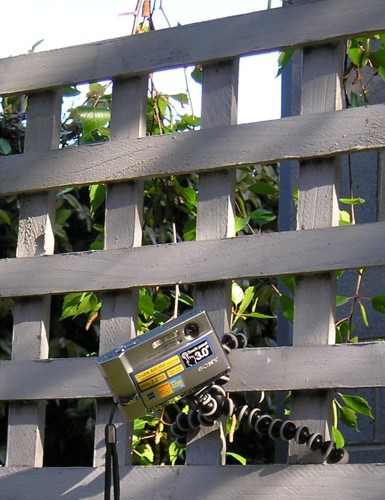 With that little test out of the way, I was fairly comfortable with the Gorillapod’s ability to hang onto something less dynamic then my steering wheel.  A note of common sense – you do want to make sure the setup is secure before taking your hands off it completely.  The rubberised grips are decent but they do not quite hang on magically.

It’s also important to note that the tripod is only as stable as the support you attach it to.  A tree branch on a windy Melbourne  day wasn’t the best option unless unpredictable movement is something you are trying to achieve.  As for vibration it is no worse than any standard tripod.  It was extremely easy to attach the tripod to my bannister.  The swivel joint at the top made it easy to tilt the head so that it is framing my photo just as I want it.  A quick check to make sure it is secure and it was good to go.

The flexibility of the Gorillapod makes very easy to configure it as a standard tripod of varying heights, and more importantly it adapts to narrow or uneven platforms.  Not all surfaces are wide enough for a standard tripod to wrap its arms around but the Gorillapod makes short work of that.  I have also noticed that whilst the platform is fairly sturdy, some care has to be taken when pressing the shoot button as I find a tendency to get small movements in the joints in some configurations as I release the shutter. 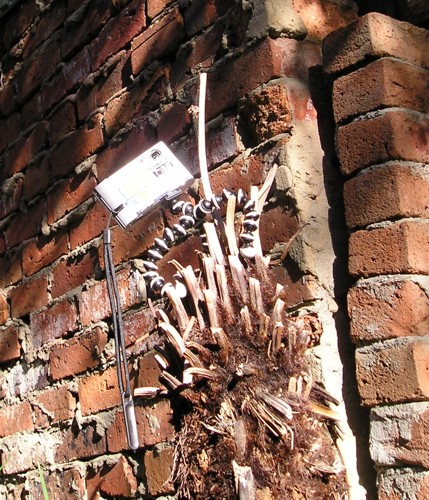 The Gorillapod is a highly versatile tripod with some limitations.  It certainly opens up possibilities where a regular tripod would be impractical, and it does it with panache and good looks.  The Gorillapod makes it easy to get interesting shots from different angles without being a contortionist, or to take impromptu group photos where the photographer is also in the photograph.  The outstanding question in my head is: it remains to be seen if the joints loosen up after a period of usage.

Joby brands themselves as an environmentally friendly company.  All the Gorillapods are available packaged and un-packaged.  They pass on the cost savings of an unpackaged product, but if you choose the more fancy way then the entire packaging can be recycled. 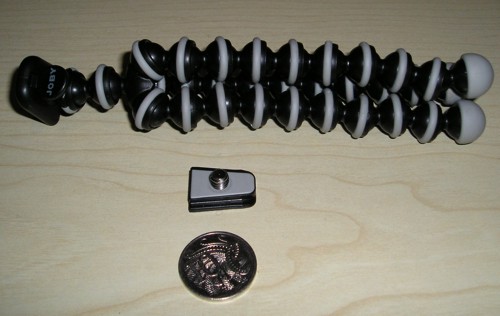 Note from Editor on the GorillaPod SLR-Zoom

The generosity of Joby knew no bounds when they also offered the Editor a model to review who selected the SLR-Zoom for his new Olympus E510.

Joby also makes an in-between model – the SLR – ideal for cameras like the Panasonic Lumix series which are heavier than the normal point & shoot models.
The SLR-Zoom can easily handle the big fellas with extended zoom lenses up to 3000g! That’s about 6.6 lbs of imaging equipment. The other gorillas can easily wrestle with 275 and 800g cameras.
Interestingly, this model also sports a 3/8-16 screw attachment which can easily be removed for standard DSLRs.
This one weighs in at just 190g (vs. just 45g for the smallest GorillaPod model.) This is sooo much handier than lugging a standard tripod around on your photography trips.

As with Kevin’s findings I’m enthused about the possibilities of the GorillaPod. And I’m a professional aerial photographer who has some good gear lying around already. Truth be known: I haven’t taken it up in my Cessna Centurion as I’m not sure how it will handle 200mph wind buffeting…
Besides, aircraft engine vibration dictates you hold your camera in your hand and don’t touch the fuselage to minimise possible vibrations. But for any earthbound jobs the GorillaPod very quickly becomes your indispensible travel buddy.

This fella is priced at around 55 dollars US in a retail pack whilst smaller models can be had for just 22 bucks (unpackaged) — even in living colours!
I’m pretty sure we’ll bring some more reviews on Joby products in the near future as they are also makers of the Zivio bluetooth headset which will be out soon. 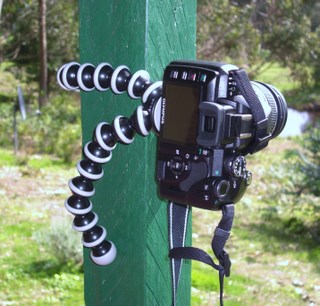