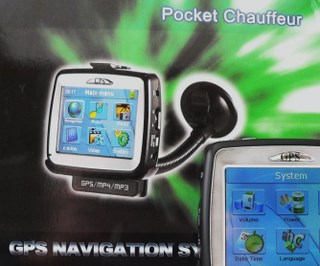 Leadertone is not a name you’d see often in the Western world. But their products may be familiar even though they can be unbranded.

Such is the case with the Personal Navigation Device that is suction-cupped to my windshield at the moment.  It’s a smart-looking compact PND simply labelled GPS.

Techrific Australia supplied the unit which is priced at AUD399.

We are quite impressed with this handy all-in-one device and here are the reasons why.

Some pundits have already been proclaiming the death of the PND because most car manufacturers are offering built-in navigation systems across their product line as an option or even standard. These integrated systems are still rather expensive at the moment, but the time will come that every car has GPS capabilities from the moment it leaves the factory. Add to this that many smartphones today also offer navigation capabilities and you may rightly question: where will the PND sector be in 3 years?

It’s a very healthy growth sector today and PNDs are being advertised on page after page in the newspapers. They have become a commodity and competition is stiff.

One retailer is giving them away with a 24 month cell phone contract.

This leads to a pretty good feature set on today’s PND and the Shenzhen Leadertone GPS6000 is no exception. 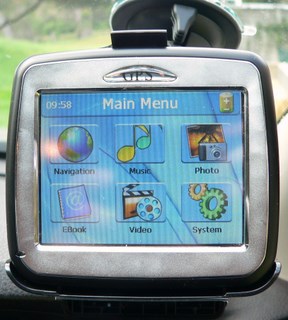 Here are the main features that make this unit attractive:

* First up, the overall impression is of a well-built device that looks good on any dash.

* It’s easy to use which is of paramount importance — particularly on the road.

* The touchscreen is bright and clear and has large icons for ease of navigating around on the menu.

* The box comes equipped with all the accessories you’d need, including an Australian plug.

How Does It Do in Real Life?

Even without reference to a manual the Pocket Chauffeur can be set up easily. That’s pretty essential as the User Maunal” (SIC) is rather useless with so-called English instructions that do not make sense. I wish Asian companies would employ a professional to translate their manuals…

Our main interest is in the Navigation menu, the rest is “fluff” although when you’re done driving and want to take the unit with you (out of sight makes it less of a target for thieves) it can be handy to listen to music on the device.

Whether you’d read ebooks on it or look at videos or photos is debatable. The screen is certainly of high enough resolution but most folks would probably use their phones for those functions already. If you do use it in standalone mode away from the car’s power source, the 1100mAh battery should last for some 8 hours, depending on backlight settings. That, by the way, is a good enough endurance to entice you to not plug in the car adapter.

I don’t like cables across the dashboard. That’s another reason why ultimately the integrated systems will win our hearts and minds – and pocketbooks. For now, the PND segment fills the needs for navigating on the cheap quite nicely.

Have a look at the clear, large icons of the Main Menu and Navigation Menus. It’s a bit humorous that the globe icon, depicting the world and labelled Australia, shows all the continents EXCEPT Australia… Anyways, that icon takes you to the place where you can specify the City, Street and Intersection. The intelligent input mode lets you select your destination after a few finger taps already. There’s no need to use the inbuilt stylus either.

The Points of Interest have my special interest as it is often the hallmark of good mapping. I checked out the restaurant scene in a few neighbouring towns and found the results rather sparse. My daughters’ restaurant in Albany, BarCino, for instance, is not in the list even though it’s been established for more than 5 years.

Similarly in Denmark where surely there are more places to eat than just at the Denmark Tavern! Fortunately, Techrific Australia are trying to implement POI data from OzPOI.com, which should give a huge improvement.

The maps themselves are very good, easy to read but not quite up to date. Just checking the local scene again I notice that some newer streets are not represented even though they’ve been there for some years already. I’m looking forward to the new map which I should be receiving shortly.

A very practical feature is the Autozoom which zooms in on your position when you slow down to a stop.

The greater detail it gives will help negotiate roundabouts and turns with ease. 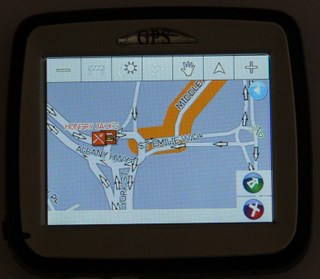 One of the nice aspects of driving with a PND enabled is the greater situational awareness it affords. You don’t always need to have route guidance – certainly not in driving back and forth to work. But to be able to “see” over the horizon and alongside the route you drive gives an interesting perspective, particularly in 3D.

If you need someone to talk to you, the pleasant voice that gives you directional info is one of the better ones I’ve encountered on a PND. Great care is always needed when following the GPS guidance provided.

There is a warning screen at start-up but common sense (however uncommon these days) also dictates that these things can give you a “bum steer” every once in a while.

Case in point: I took the standard route to work which is the shorter of two possible routes.

Sure enough, it tried to get me back onto the main highway time and again, even to the point of wanting me to take a gravel road to do so while ignoring the perfectly good alternative!

It’s best in those cases to specify an intermediate waypoint. However, it’s not so easy to do route planning via specified waypoints. I also found that some of the Options to personalise the display are lacking. For instance, I’d like to see a readout of the actual speed so that you can check the accuracy of your speedometer.

This is nitpicking as, overall, the Pocket Chauffeur delivers value for money. Key among these is ease of use.

If you’re in the market for an affordable PND, this compact device at AUD399 is worth your consideration.