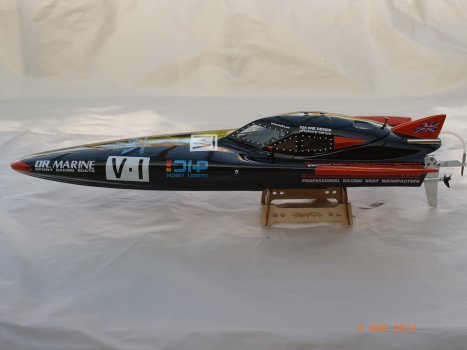 Looks like a black bullet – 920 mm long with heaps of aesthetic appeal.  I’m talking about the V24 MDF 920 EP remote controlled electric racing boat built by Dragon.  We have tested three of the Aquacraft range, one of the Joysway’s, and whilst Wirelesshobbyz has them all, at our request he has sent us something we thought should be a bit different.

Does it go as good as it looks?

Read on to find out! 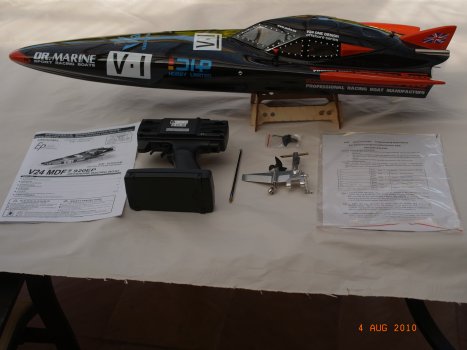 Built by the Dragon Hobby Company we thought we would ask for this boat as it is longer than most and we thought it would handle rougher conditions than the previous ones that we have reviewed.  What is of immense interest, is that the owner of www.wirelesshobbyz.com is himself an avid remote controlled boat builder and has significant experience in making all these boats go faster.  He recommended a different boat from one of his other lines but we ignored his advice and insisted on the V24 because after all, the customer (me) is always right!

Let’s take you through what we found. 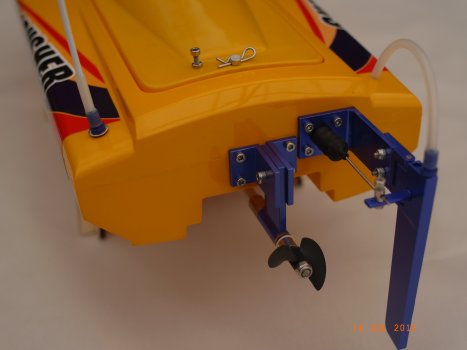 Assembly
A slight ding in fibreglass in the keel area was found and although it was glassed over and finished to be nice and shiny, imperfections such as this always sends us a message that quality is not as good as it could be.  Decals are affixed and were of high quality with no lifting or bubbles evident.  Woodwork was good, but battery position was too far back and not easily changeable.  As the boat takes only one 11.1 Volt Li Po, the forced battery position on one side made the boat almost tip over when the boat was in the water.

The supplied manual gives an incorrect listing of the tools you will need and you really only require a crescent and some allen keys.  The rudder mounting could be keyed very easily and then have less reliance on the allen key bolt to stop rudder shifting.  Allen key recessions require ODD sizes of allen keys that are not available as they are neither accurate metric nor imperial, which becomes annoying to grind ones for perfect fits, so we suggest that Dragon change their supplier of these to one where there is better quality control.

The boat stand, if put together like the manual says, is not tall enough to keep the boat’s rudder off the table etc so we had to assemble it differently (not all the way down the slots) and glue it to ensure we got some height.

We did like the supplied reusable battery tie downs, and thought that was a good idea.

Transmitter & Receiver
This boat came supplied with an AM 27 MHz  Channel 5 transmitter and receiver and whilst we did take it to the pond to trial it, interference was shocking so we abandoned the whole set up and asked Andrew at wirelesshobbyz to rescue us.  He immediately sent us a 2.4 GHz which we have proven time and time again to be excellent. 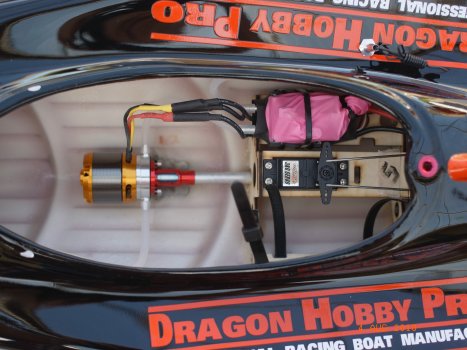 Maiden Run (All runs done in a 40 metre distance)
We used one 11.1 Volt 3300 mAh 25C battery placed in the centre just forward of the motor and attained a speed of 28 km/hr as shown on our 66 satellite tracking Hollux GPS logger.  We were unable to place it in the wooden battery cradle as the boat nearly tipped over.  (This was the same run as used in all of our tests and it appeared as though all of the boats had reached maximum RPM and speed). 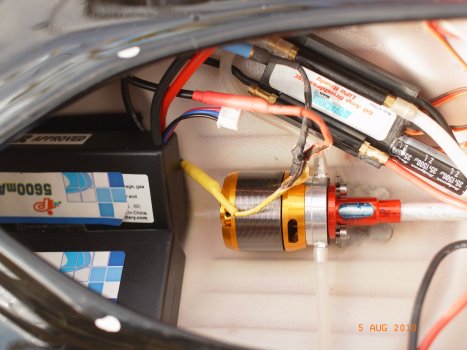 Second Run
Desperate to achieve some more speed we attached two HEI 7.4 volt 5600 mAh 50C batteries in series, providing some 14.8 volts and promptly cooked the motor in the first 30 metre run before we could set up the drive trim angles.  The use of two 7.4 batteries however, did make the boat sit nice and level in the water and by using Velcro tape, we had the batteries sitting pretty much alongside the motor on each side. 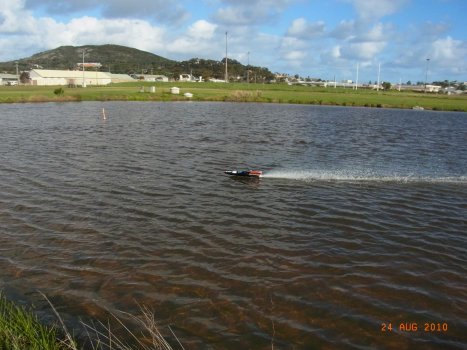 Third Run
We took the ESC out and replaced it with the one from the Aquacraft Supervee27 a 45 amp water cooled that would handle 14.8 volts and also fitted the SuperVee27 motor.  By additionally using the same stock propeller as the first maiden run, achieved a speed of 37.7 km/hr.

Fourth Run
We discarded the stock propeller and used the stock Supervee27 motor, 45 amp ESC and propeller that attained an already proven speed test on this site of 62.8 km/hr (see Supervee27 reviewed).

The V24 920 EP now achieved a speed of 49 km/hr.  Both the motor and ESC remained nice and cool with our new plumbing arrangements.

The reduction in speed, we believe, is due the extra 25 grams that the V24 weighs over the Supervee27 and also the additional length of the V24 920 EP.  We believe that the motor may be labouring and probably needs a slightly more powerful motor to drive the Supervee propeller at the same RPM as when it is in the Supervee27 to get the 62.8 km/hr.

Observations
We now have first hand knowledge of the difficulties faced when trying to experiment to make these boats run faster.  You will ultimately spend far more money trying to get it all right than if you were to go out and buy one that will already achieve the speed you want.  In no case did we find that any of the boats we have reviewed achieved the advertised speeds.  This is in spite of us having installed far more powerful batteries from HEI (Hobby Express International who always seem to have what we wanted) than was stipulated in all of the boats.  (In this case we installed two HEI 5600 mAh 50 C LiPos in series.)  We were also assisted by the valuable expertise from Andrew from www.wirelesshobbyz.com.au who has a wealth of knowledge in this area as he modifies boats for customers and tries to give them exactly what they want.

It is likely that Wirelesshobbyz are going to provide us with one of their customised boats for a review in the next few months, so we will expect great things especially as they managed to get this same boat the V24 920 EP up towards the 70 km/hr mark!

The V24 required far more changes to the boat than the Aquacraft Supervee27 did to arrive at a level we liked.  (Maybe we picked Dragon’s wrong boat to review?)  Anyway, the changes made were: 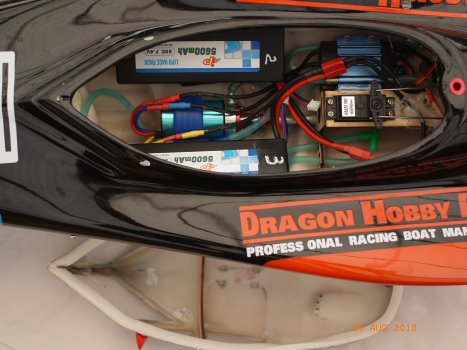 Conclusion
We particularly liked the water pickup which actually works better than any previous boats we have trialled to date and we intend to install this on the Aquacraft Supervee27.

All in all though, we did have to make considerable high cost improvements/changes to get this boat to go faster than the 28 km/hr it began at.

We really did like the hull design and preferred the added length over the smaller craft we had previously tested and it certainly made a difference to predictable handling in rough water.  Now that we have got it to around the 50 kms mark I like it even more.

At a retail value of about $539 Aud is it worth all the angst and additional expense to make all the changes ?????  You would really have to be dead set on this boat’s design to do that.  I would suggest that for value for your money, you may as well get the guys at wirelesshobbz to do it and get it right the first time. 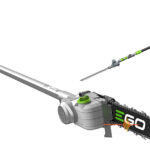