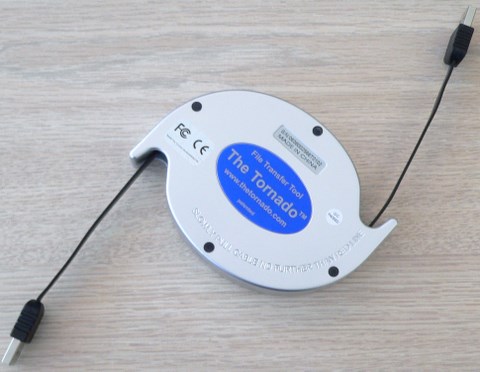 Every once in awhile a gadget lands on your desk and hangs around, kicking up a storm.

The aptly named The Tornado (but not for its destructive capabilities!), is an incredibly useful device for transferring data from one PC to the other.

We have just finished a big Vista migration in which this device played a major role.

Let me show you how life in the fast lane has now become a lot easier with hurricane-like transfer speeds and a pretty (inter)face.

The Tornado File Transfer Tool from Data Drive Thru, Inc. is shaped like the weather symbol for a tornado and even has a picture of a tornado on it.  It houses about 4 feet of flat cable, two feet on each side.  Pulling them out is the only bit that’s hard: they’re a bit too deeply recessed and slippery or maybe my fingers are too thick to grasp them comfortably.  Once connected to the USB port of either machine the built-in application software immediately analyses the files on both computers.  The flashing LED lights on top of the device light up to let you know that you’re connected.  The interface presents you with a split screen, one labelled This Computer and the other, rather logically, Other Computer.  With this Explorer-like interface it’s now very easy to drop and drag files and folders across. It’s bi-directional, which means you can move files back and forth.

The Tornado shines not only because of its easy interface but also through the speed of transferring files.  It operates at USB 2.0 speeds, which allows The Tornado to move files about 600 % faster than standard flash memory-based storage media. 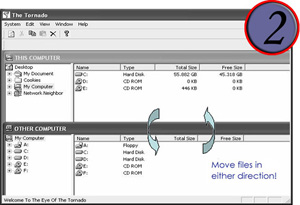 Getting files from one computer to the other has been a perennial problem.  From the dark days of DOS, yes, that’s way before Windows, I remember a nifty little utility called LapLink.  These days we have a number of different ways to achieve the same result.  We can network computers or use portable media. Using crossover cables to network two machines together is not that hard for the average IT guy but it is certainly not as easy as falling off a log…

Flash media are fine for small files both because of the limited capability and the slow speeds.  The Tornado really sits in a niche because of its ease of use and high speeds.

In fact, they are sponsoring a competition at the moment to see if you can beat their speeds.  Unfortunately, it seems to cost money to enter the competition, so you must be pretty sure you can take up the challenge!

Well, it also costs you money to experience the benefits of The Tornado but, at a price of around 60 bucks it’s a steal.  Even experienced technicians, no, let me make this: especially experienced technicians, will love the ease of use of this migration tool.  With most of this world’s computers still running on Windows XP or earlier versions there should be a huge market out there for this whirlwind device.

Any downsides apart from the price?

Frankly, the price is not really a downside but only if you consider that some of the alternatives to transfer files are essentially free.

If there is one downside it must be that the interface does not allow selection of multiple folders.  I think it has more to do with limitations of Windows Explorer than shortcomings of the device.

And yes, you need nimble fingers to access the cables. However, they do retract automatically with the press of a button…

It’s a simple device, but not simplistic.

For this jaded, grumpy old geek, (after all, I’m of the same vintage as the venerable Walt Mossberg) it’s an ideal tool to suck up my precious data from equally old computer gear into the virgin spaces of my gleaming Vista machine.

I have decided to give this Tornado Transfer Tool the highest rating on our DigitalReviews Network: The Editor’s Award.