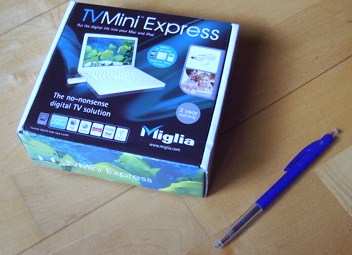 When I took up the offer to write a review on the TVMini Express by Miglia Technology I didn’t quite know what to expect.
Technologies develop fast and shift while we as consumers might just not be aware of it.

In hindsight it’s all quite clear! I live in the Netherlands, where like most households we have cable television. When I saw a news item sometime last year (I think it was September 2006) I didn’t take much notice of it: the normal airwave tv transmissions in our country would stop on December 11th, to be replaced by digital airwaves… I remember thinking something like: "So what?!" And forgot about it, until I received this tiny box over the mail a few weeks ago.

I must say I have learnt a lot over the past few days, and found a good excuse to buy myself a beautiful new little laptop. Now I enjoy clear tv pictures, and sparkling stereo sound with my headphones.

Of course I realize it’s a bit over the top to buy a new MacBook only for reviewing this tiny digital marvel at the beginning of the 21st century. I see it as a lovely start on a journey to make it the center of all my digital communication: education, entertainment, keeping in touch with friends and family all over the world…

This product only works on an Apple Macintosh, with USB 2 – but if you are a user of other computer equipment… read my review too: there’s something to learn here for you also. 🙂

So why don’t you join me in discovering what this TVMini Express can do?!

What is DVB-T?
Before I dive into how I got this usb-receiver started, let me give you a bit of background information. This TVMini Express receives DVB-T signals: it stands for Digital Video Broadcasting Terrestial … that’s quite a mouthful. Simply said: tv-signals have been aired for decades with analog signals, much like radio. In many countries in Europe, this conventional broadcasting has been stopped or will stop to be replaced by digital broadcasting. If you buy the right kind of receiver, and also the subscription to go with it one can receive many commercial tv stations. There are usually also some free public tv stations.

The situation differs in each country: here in the Netherlands there are three public tv stations, and in each province a regional station. With this TVMini Express I can receive these free stations.

Before deciding you would like to use your Mac as a tv, look into the situation in your country:

My impression is that this technology is still in it’s infancy, and it’s good to be informed about your local situation.

So now you have a little background, let me give you my experiences setting it up.

My first try!
When the postman handed me the tiny package I couldn’t wait to see if it would work. Now I’m the average computer user: just start connecting and installing, before reading the documentation. And of course I’m spoiled by the slogan "It just works!". In most cases it does, but in some situations it just doesn’t. I’ve been told that in troublesooting you learn the most. And that’s just what happened to me!

I have this Mac Mini attached to a switch box, so I can use one monitor, keyboard, and mouse in combination with a Compaq. Pity it has only USB slots at the back, so I have this extension cable coming to the front. After attaching the MiniExpress, and installing the software The Tube 1.0.3, it fired up, and I got three minutes of clear television. After that it went dead, and it didn’t re-appear.

First I went to the shop where they sell the receivers, and the subscriptions for digital television. The co-worker told me broadcasting has started only recently in our area, and reports of the quality of reception is very mixed: in one end of the street you may get a strong signal, at the other end of the street it may be very poor. He couldn’t give a reason for it.

It was also time to read the documentation, and I came to the following possible causes:

* the reception in our area?
* an extension cable may interfere with the tv-signal.
* mixing usb1 and usb2 equipment may interfere: the switch-box?

Of course being a perfectionist I could only think of one solution: get hold of the newest MacBook. That way I could make sure the laptop wouldn’t be the culprit.

A few days later, it was time for Take Two!

Take Two!
Using my new laptop, take two only took about ten minutes: connect, install the software, register. Press the autotune button, and move the antenna around. The only strange thing really: with poor reception the usual advice is to move the antenna to the window (or even install a rooftop antenna). In my specific location, moving it to the center of the house gives me a stronger signal!

During this session I noticed the signal would go off and on, so I got the idea there could be a loose connection. And when I turned the metal connector attached to the receiver: sure enough I had discovered the weak link in the chain. Upon close inspection I noticed it was not firmly connected, so with a pair of pliers I tightened the metal cylinder very carefully. It’s been working fine after that! A system is only as strong as the weakest link… another lesson learned 🙂

Putting it to good use
Now that I’ve got the TVMini Express properly installed, I am very happy with it! I do have two projects, that get media attention pretty often. There’s this saying: "One picture says a thousand words!" I think using fragments from news items and/or documentaries in a presentation can be very powerful in getting your message across. I am sure this receiver will be put to good use for building an archive on the issues of climate change / global warming, and using it in presentations! I’m also very interested in the OLPC project. Here again: this is not only equipment I could use for entertainment, but also as serious tool in research, and work! 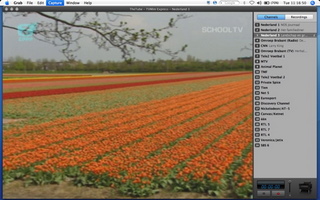 A few bottomlines…
This has been my first hands-on experience with digital tv – and I can sum it up in one (bottom)line: if you have a Mac(Book) which has USB2, and in your area there is a DVB-T signal – this TVMini Express is a beauty to use!

It doesn’t end there, because I wouldn’t be a Mac-user if I weren’t a perfectionist! And I feel this little tool is almost perfect.

What would I wish for? First of all after using it for a few hours I still feel the little round connector is playing up once in a while: after I adjust the position everything returns to normal, and I get back this crisp stereo sound and the clear video.

I would like to see this connector of the screw-on type, and a bit more sturdy. IMHO that would solve this glitch…

The second thing that I would like to address is: considering this is version 1.03 of TheTube software, there is room for improvement in the next version. I bet the developers have it in mind already… add some basic functioning like in iPhoto: date&time stamp, keywords and/or comments, and as a bonus the instant search.

For the time being I am very happy how simple it is to use. But in a year’s time I hope my archive has become large enough to use it as a reference on the subjects I am interested in.

A third, and last point I would like to make: as a knowledge worker I really want to use the captured video in my presentations.

Maybe I have overlooked something, but I couldn’t find a way to export footage. If a picture says a thousand words, wouldn’t it be compelling if I could start a presentation with a current news-item, or part of a documentary – full-screen?

It would make the point, and when asked afterward how I did it – I can just play it cool, and mention that the people at Miglia made it possible!