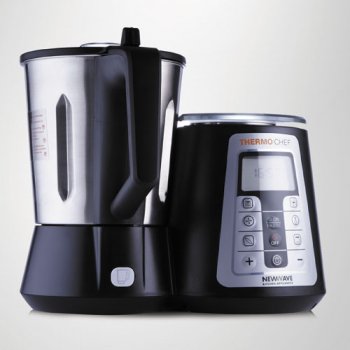 With the plethora of cooking shows on television there has been a huge uptake in tools and appliances for the kitchen. There are a lot of people that want to be a MasterChef or at least have the ambition to be a master chef in their own kitchen. What better help than a food processor that will do all the hard work for you? Plenty of models to choose from but today we are reviewing the Thermochef Natura, priced at around $800.

Courtesy of KitchenwareDirect we received the Thermochef a couple of months ago. So we’ve had plenty of time to get familiar with the workings of this food processor and even compare it with the Thermomix , a much more expensive machine with essentially similar capabilities.

This is however not a direct comparison between the two appliances as the Thermochef needs to be viewed on its own merits at the price point that it has. Any comparisons between the two are akin to comparing a $25,000 station wagon with a $50,000 SUV. They do roughly the same tasks and one is arguably better than the other and might have features that are lacking in the cheaper model, but the reality is that not everyone can afford the more expensive machine. End of story.

Even at the $800 price point a lot of people will have to think twice if they already have the basic equipment in the kitchen. Is it worth the investment? Let’s have a good look at what the Thermochef does and after that you will be in a better position to make that judgement. Once you realise that this versatile machine can replace up to seven or eight regular kitchen appliances, the Thermochef becomes a whole lot more affordable!

What are the functions of the Thermochef?

You can weigh your ingredients with the inbuilt scales and chop, grind and mix them. Mincing, beating and whipping are part of the repertoire as well. It can steam and blend, knead and cook. Can you see already where it could replace some of the other appliances you are currently using? And it is good to see the kitchen less cluttered with fewer things to clean. Talking about cleaning up: the blade assembly and the lid can go in the dishwasher but the stainless steel jug has electronic connectors on the bottom to connect to the motor so obviously that is one to do by hand. The Thermochef is a good-looking machine that will take pride of place in anyone’s kitchen.

However, probably the main reason for investing in an all singin’, dancin’ food processor is to save time and to make more healthy meals by creating your own from scratch instead of buying the usual expensive pre-made, preservative-laden jars, packets and sachets. The Thermochef allows you to make wholesome and nutritious foods just that much easier and faster.

We were pleased with the build quality of the Thermochef but there was one small problem initially: the mixing bowl did not heat up. You might call this a big problem and it would have been were it not for the service department. They acknowledged that this problem had happened before and was related to the connectors at the bottom of the jug not doing what they are supposed to do-connect! This could have happened in the shipping process. The new bowl was quickly sent with the additional bonus that the non-heating one can be used for grinding spices and so on. And we noticed that there has been a redesign of the underside of the bowl . We expect things to work out-of-the-box and I must admit not being able to get the bowl to heat up was frustrating as we tried different settings and combinations. However, the knowledge that this machine is backed up by good service is also worth finding out!

The scale allows you to weigh new ingredients and can be reset to zero any time. You can weigh the whole mixing bowl on the scales which have a limit of 3 kg, but I found it easier to use a small plastic bowl for weighing the ingredients. It would have been nice if the display had been angled upwards a bit for a better reading. Now you have to duck down a little bit.

We have tested the unit with the following recipes, all of which came out very pleasing: soups, sauces, risotto and pasta, bread, cakes, custard, sorbet, porridge, alternative grain flour, nut butter, dukkah and curry pastes,  potato salad and, of course, just cooking spuds and veg…

We had some trouble with the steamer that is included with the unit. It was due to the lid not being able to be seated properly onto the steaming mesh… This black steamer mesh is slightly warped (the bottom is not totally straight and doesn’t sit flush on a straight surface). This means that the top does not allow the lid to fit properly. You only need this black mesh bowl if you want to steam more than one dish at the same time.

Again: this is not a big deal as a replacement mesh was dispatched straightaway and you should expect the same service if you notice the same problem.

We found the lid that goes on top of the bowl also a bit problematic for getting it sealed properly. In checking the forums many people have noticed the same difficulty which will go away over time but it is easier to deal with when you add a little bit of moisture around the edge for locking the seal in place.

We are impressed with the time-saving that comes with being able to do many tasks with one machine and to be able to walk away when it is heating up and stirring the mixture. Even cleaning up is a cinch as any sticky residue in the bowl can easily be loosened by adding a bit of warm water and some detergent and putting it on high stir for a few seconds. Just to illustrate the time-saving on preparing a risotto:  using the Thermochef would save me about 30-40 minutes. And when making a soup you can usually dispense with using knives and cutting board as the machine does all that for you. These days we seldom use saucepans or colanders. All of the stirring and cooking can be done in the same jug. Soup in 10 min? Can be done. And chopping up a quick salad is a matter of seconds.

There is an extensive manual and DVD that comes with the unit. It has also a fairly large section of recipes which, incidentally, are easily interchanged with those for the Thermomix, which has a larger fan base and there are more recipes floating around for that unit on the internet.

All the pages of the manual and recipe segment are plasticised for easy cleaning but that sometimes makes it hard to read with overhead kitchen lighting.

We are very impressed by the Thermochef and the value it represents. There are always machines that will do a better job in a comparison, but when it comes to value for money the Thermochef is hard to beat. It’s a godsend for busy families as it can save you lots of time and, if you’re so inclined, will start you on the path to experiment with making your own sauces and the like. In other words, what you will be serving up can be a whole lot healthier and tastier…. We have people with food allergies in our family, so a lot of recipes need to be gluten free and even sugar free. The Thermochef will allow you to cater a lot easier for these requirements.

You should be able to source the Thermochef from suppliers like KitchenwareDirect for just under $800 which includes free shipping. And of course a two-year warranty. NewWave has a number of kitchen appliances that are fairly new to the market, such as a small induction cooktop. We are not a fan of electric cooktops, doing everything with gas, but it might be interesting to have a good look at the benefits of induction cooking which is different from your standard electric type of cooking. So stay tuned to a possible follow-up review on NewWave products.