Got My Eye On You – Synology DS115 NAS/Surveillance Station Review 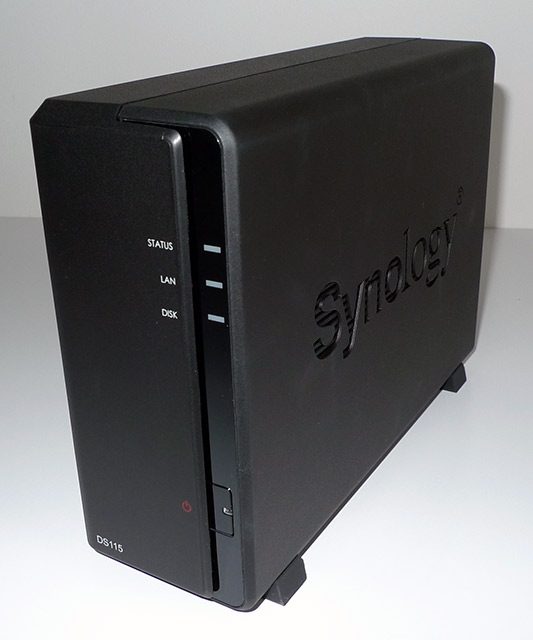 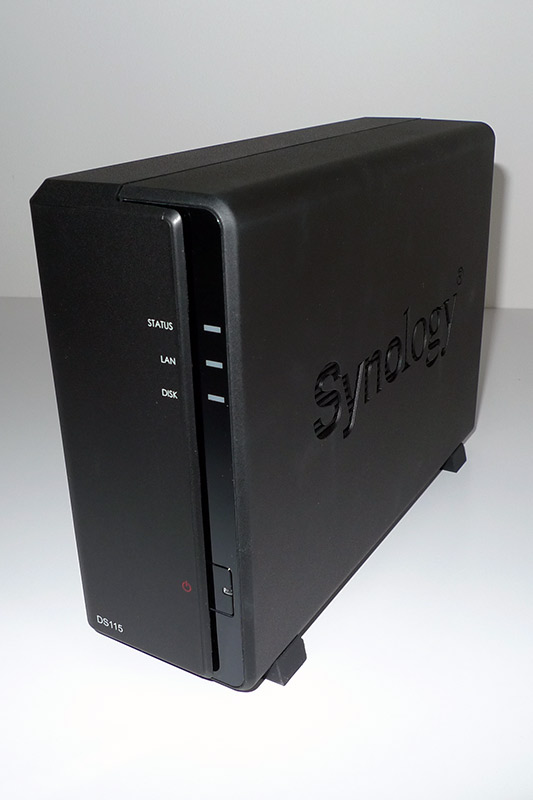 The DS115 is Synology’s latest single drive bay Networked Attached Storage (NAS) device. Along with our usual hardware review, we also take a look at how the DS115 works in tandem with the free Surveillance Station software package to control multiple IP cameras.

Being a single bay unit, the DS115’s box is really quite compact. Along with the unit itself, the DS115 package contains two small packets of screws, a short Welcome leaflet, a short length of CAT5E cable and a compact region agnostic plug pack (review unit shipped with an Australian standard power point clip). 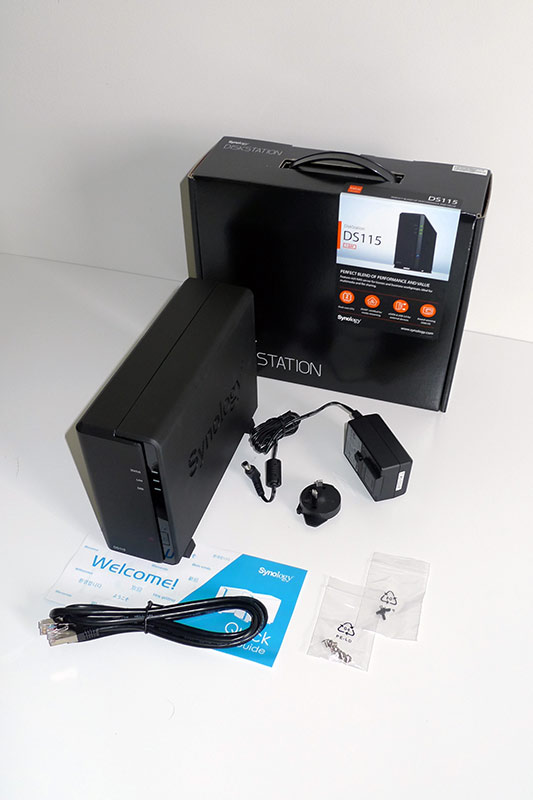 Unlike the two most recent reviewed Synology NAS devices, the DS115 has a more plasticy feel to it and while it is solidly built, the DS115 just doesn’t have the industrial feel of more expensive Synology boxes. The front face has a small reflective piano black surface on its right hand side which features a power button and three indicator LEDs – Status, LAN and Disk Access. Both left and right sides of the unit have the standard Synology logo venting cutout. The rear of course, is where the unit’s connectivity resides.

The rear of the DS115 includes an eSATA port, two USB ports (one being USB 3.0) and a Kensington lock slot. Beyond a tiny pin hole reset switch, a power port and 6cm fan round out the DS115’s rear.

Rather than pull off a front panel to access the drive bay like the DS415+, the DS115 literally has to be split in half to access its drive bay. Pushing the left side of the unit forward results in the DS115 splitting in to two pieces – a shell on one side; and a drive bay along with additional hardware on the other. Despite its appearance, this drive bay access system is quite convincing once you get over the initial shock of cracking the unit in two!

To give the DS115 the DigitalReviews treatment, we connected it up to our small local area network. All connections on our network are via CAT6 running through a HP Procurve switch. Routing is handled via a Netgear DGND3700. 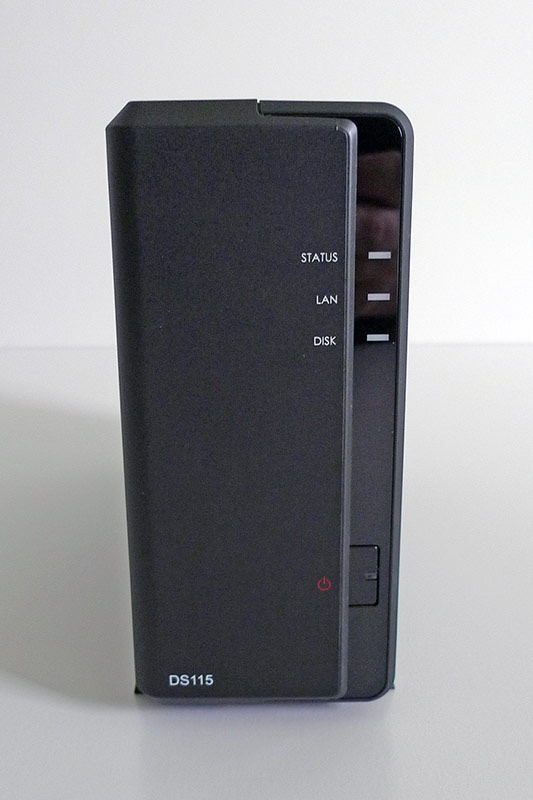 After making all the physical connections and inserting a 500GB hard drive to the internal drive bay, we fired the DS115 up. A minute or so later, the DS115 beeped to life and after browsing to <http://find.synology.com> in our web browser, we quickly got things up and running with Synology’s easy to follow Web Assistant. On the whole, the online setup is rather painless and after no more than twenty minutes we had downloaded and installed the latest DSM (Disk Station Manager) software, formatted the drive and had the DS115 primed and ready for testing.

We logged into the familiar DSM web interface, where we were immediately greeted by a small badge on the Control panel announcing that there were updates were available. Synology has a strong reputation for keeping their users informed of security patches by notifying users via the DSM interface and also through direct email communication. 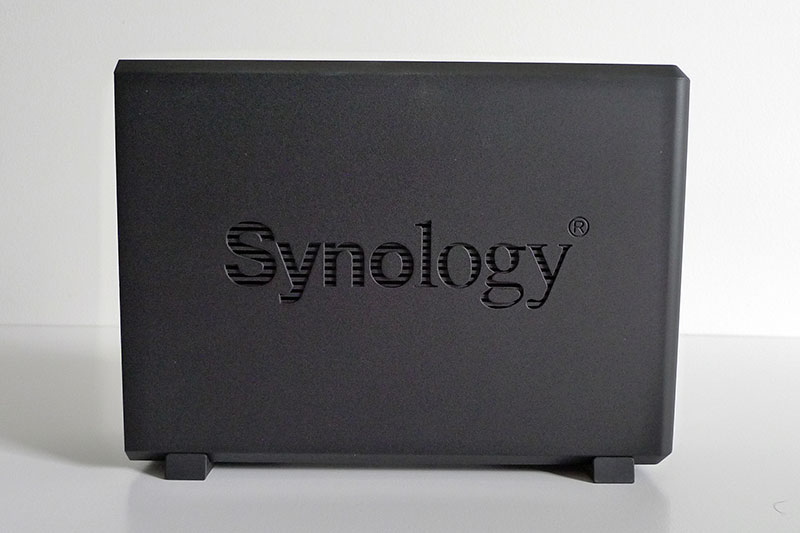 To undertake testing of the surveillance features we also installed the free Surveillance Station package from the built in package centre. Reminiscent of iTunes, the package centre allows users to download a variety of packages to enhance the functionality of Synology NAS devices. These packages allow Synology NAS devices to take on even greater functionality, such as a Plex Media Server, Joomla Server and a Mail Server. but to name a few. In fact, over 60 packages are available from the official Synology repository. For a full list of available packages, see Synology’s add-on packages information page.

For the purpose of this review, Synology were kind enough to loan us two ACTI surveillance cameras (Model I51 and B97) along with a GEP-0822 8 Port Level One POE (Power Over Ethernet) switch which we connected to our established network. 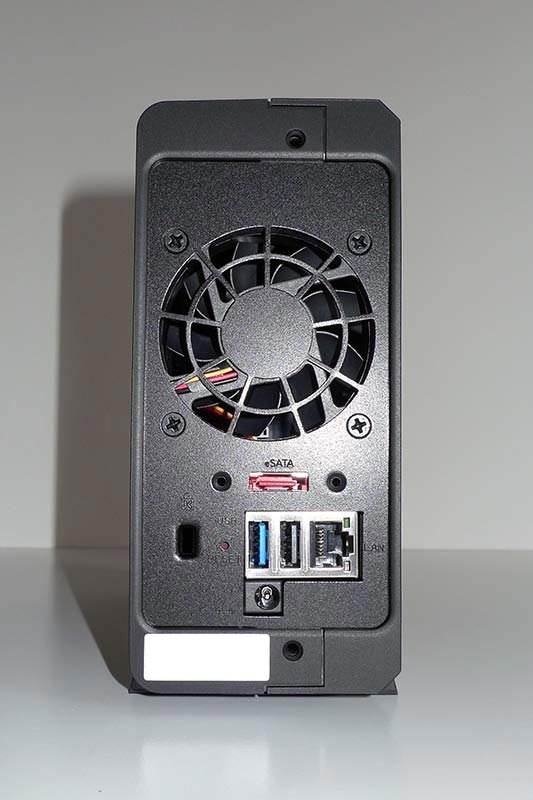 Also worth noting is that all tests were conducted with an enterprise level 500GB Western Digital hard disk drive installed inside the DS115.

Every time we look at a NAS we run some standardised tests. While the tests run on a live network, they are indicative of how a device will work in a real world environment. 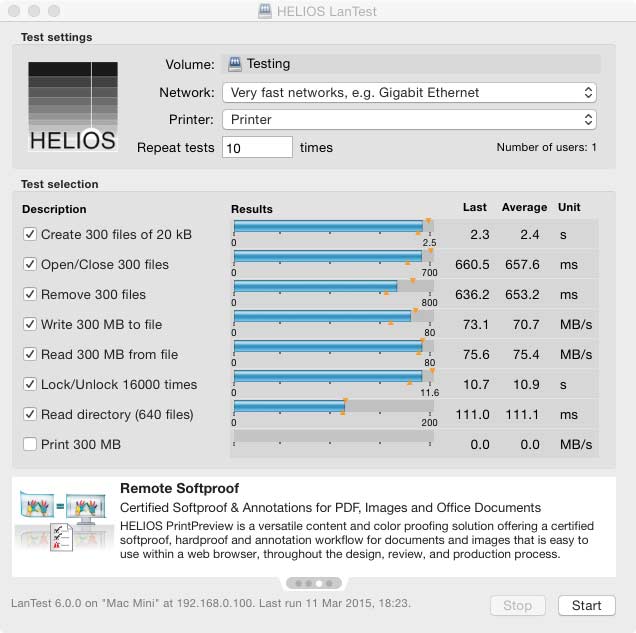 All transfer tests were conducted via a Mac Mini 5,1 running OSX 10.10.3. For external transfer tests, the Mac Mini’s internal 120GB SSD was used. We also used version 10.3.3 of the AJA System Test Utility, version 6.0.0 of Helios LanSpeed Test and all timing was measured manually via stopwatch.

As mentioned earlier, to test the DS115’s surveillance capabilities we installed the Surveillance Station package from the Synology Package Center. Synology provides licences to operate two cameras out of the box but with the purchase of additional licences, the DS115 can manage up to 10 independent IP cameras. 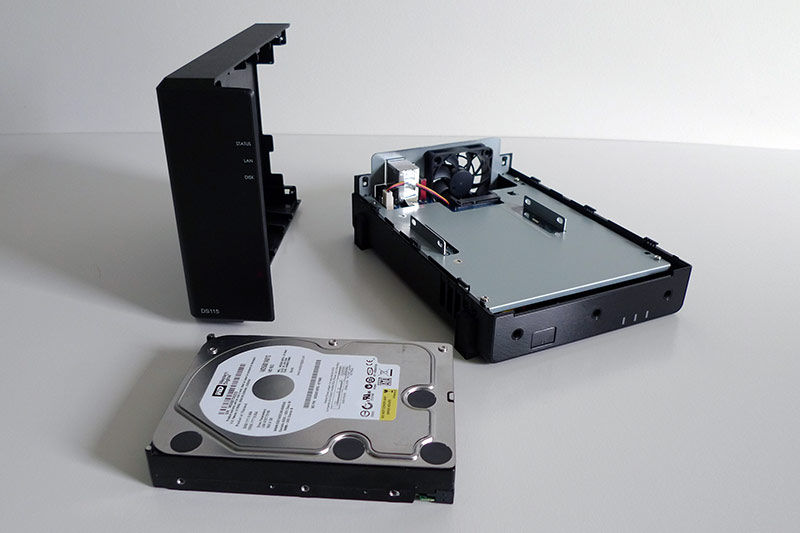 We connected our two loan cameras up to our local network via the Level One POE switch and then used the Surveillance Station package to connect them. While the B97 Camera worked from the outset, the I51 required an update of the Surveillance Station package to work. Having said this, the I51 seemed to be quite finicky with our setup so we did the majority of our testing with the B97. The ACTI B97 is a full featured IP camera with full remote tracking and zooming capabilities.

It is worth noting is that while we have never had any problems with the DSM web interface in Firefox, the Surveillance Station package refused to play ball for some unknown reason. We switched to Safari for testing which immediately prompted us to install a small add on package, which brought the package to life. 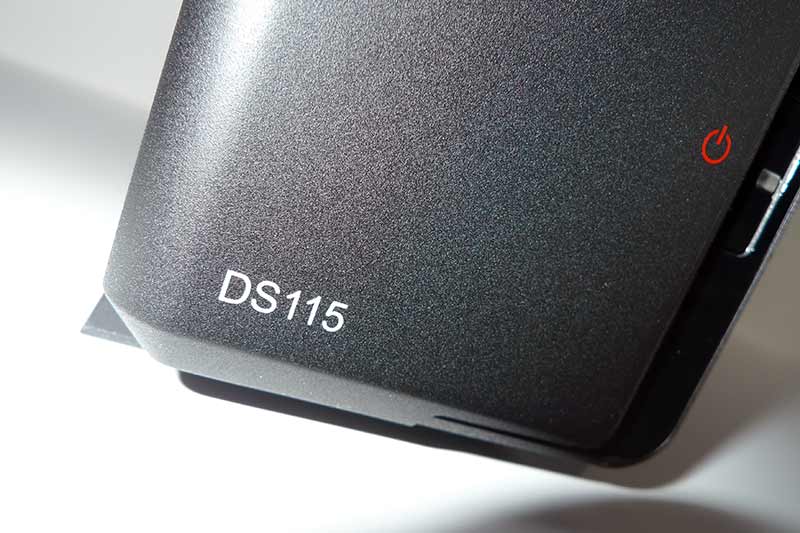 The Surveillance Station package is designed for easy access to both simple and complex tasks when working with multiple IP cameras. Options can be quickly set and tweaked for each camera, including creating a patrol route, email event notifications and the setup of complex event action rules.

Basic functionality like viewing recorded videos, accessing the live views and the taking of snapshots are all easily accessible via the DSM like Surveillance Station interface. 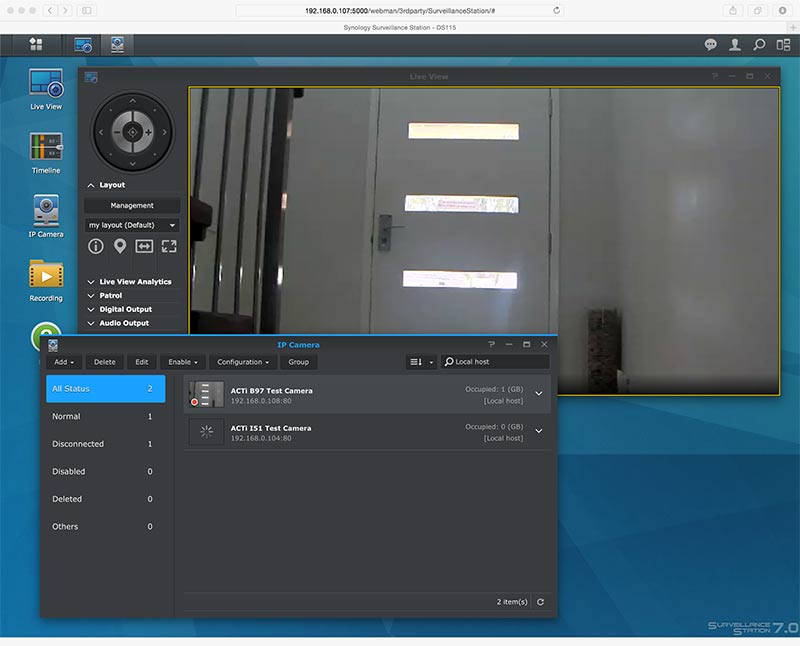 Controlling the full featured B97 IP Camera was as simple as pressing the graphic remote control to the left of the window which easily allowed panning, tilting and zooming. And of course, being a Synology NAS, this can all be accomplished securely over the Internet rather than just over a local network as tested.

Other features of the Surveillance Station package include the ability to find videos via search and also via an intuitive timeline interface. Multiple cameras can be displayed and operated at the same time and alerts can be setup to inform you of critical events. Provided your camera hardware supports it, Surveillance Station even supports two way audio communications. 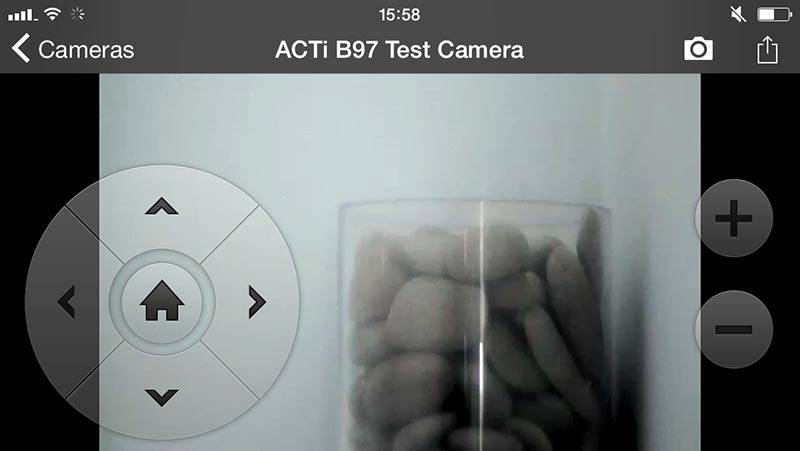 Accompanying the DSM (web) based Surveillance Station is the DS Cam iOS app which essentially offers a watered down version of the DSM package. We effortlessly viewed (and controlled) the B97 camera via our iPhone 5 and were impressed by how far this kind of mobile integration has come.

We should quickly add that Synology has created a whole suite of mobile apps, from cloud file sharing to watching videos from your NAS on your your iOS or Andriod mobile device. 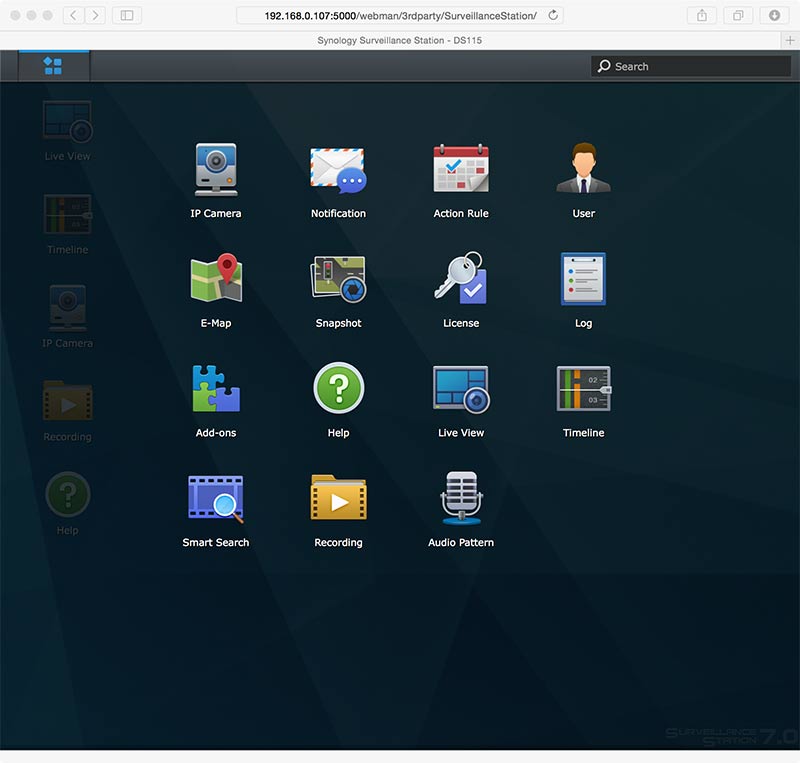 The DS115 is a neat little package which has a small footprint, both in its physical dimensions and its low power consumption and is very quiet in operation. If its to store files, or automatically record (and manage) surveillance footage, the DS115 is a great budget option.

Beyond this, the DS115 is able to run the many add-on packages available in the Synology Package Center, further increasing its /bang for buck/.

The DS115 is currently available for approximately $200AUD from computer hardware specialists.