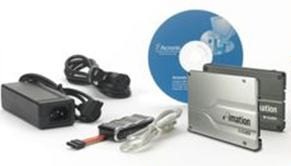 What a brilliant idea!  Most people who want to upgrade to the speed and performance of a solid-state drive might be put off by the daunting task of either a fresh install or ghosting their HDD.  I know that I’m in that category: I hate going through a fresh install all the time because I do it several times a year and every time it takes ages to get it back to a workstation, personalised to my needs.

However, Imation have come out with a simple upgrade kit that contains everything except a screwdriver to make upgrades to their SSDs a non-event.
I tried it out today and the big question is: how did I go?

Only announced a few weeks ago, we are probably the first to receive an Imation SSD Upgrade Kit and do the honours on the review.  Testing this kit was probably the easiest task of any of the hardware reviews we’ve done.  It was all over in less than an hour: and 90% of that time was sitting around waiting for the old hard drive to be cloned to the SSD.  The next step was to install the SSD, followed by a successful boot-up.  There is a little bit more to that but these were the essential steps.

First let’s see what’s in the box because that’s the key to the whole success.

* Power Adapter to power the SSD outside of the notebook

We have done a review of Acronis earlier so we’re familiar with the software.  It’s great for backing up your data or in this case cloning the whole drive.  In the package came a bootable CD.  Don’t just put it in your CD-ROM drive and wonder why doesn’t want to autoplay…
After you have done some housekeeping on your old drive, like emptying the recycling bin after you’ve chucked out all the files you don’t need any more and removed programs that you don’t use, shut your notebook down and boot it up from this CD.  Then just follow the instructions.  Presentation of these instructions is pretty basic, reminding you of the old DOS days and sometimes you wonder what the system is doing because it takes a little while to show progress.  There are several options but the one you want for now is to Clone your hard drive.

In my case I had already done an upgrade to a 64 GB SSD some time ago using ghosting software and that went without a hitch as well but took a lot longer.  To clone 60 GB of data took less than 50 minutes.  I forgot to mention that before you get to the cloning stage you need to hook up the SSD to the SATA cable and power (using it basically like an external hard drive). There is no telling that the drive is powered or working as there is no LED that lights up nor can you feel the vibrations and hear the whirring as you can with a standard HDD.  And that’s a good thing of course… 🙂 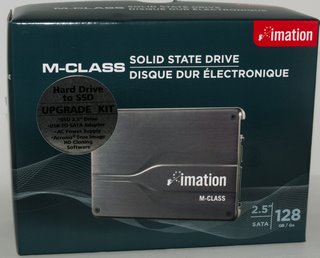 When the old drive has been successfully cloned it’s time to shut the system down again.  I had trouble ejecting the CD and had to resort to the old standby of using a paperclip.  Next, locate where the hard drive is situated on the back of your laptop and this is the bit where the screwdriver comes in.  Might be handy to totally disconnect the laptop from mains power as well as disconnecting the battery.  Carefully replace the old with the new drive, and reassemble.  Voila!
The most anxious moment would probably be where you boot it up to be followed by ecstasy when all the familiar icons populate your homepage.  All is well and that within an hour!
There was only one minor eyebrow raising moment when I checked on the volume capacity of the drive under My Computer.
It showed only 64GB! Then I realised I still needed to create another partition for the other half…
So now I have a System and a Data partition of roughly 60GB each.

So far I’ve only talked about the Upgrade Kit and not so much about the SSD itself.

We’ve reviewed an earlier (MTRON) implementation of the Imation SSD product range here. Let’s just be very unscientific about this one: my old Asus V1 notebook is just singing and dancing again! It’s actually been way overdue for a replacement (and have been looking around already for one here) but I just found out that a heart transplant was all that was needed…

And if you want to be pedantic and technical: just have a look below for the tech specs. Hey, there are faster SSDs out there but if you just replaced a mechanical, noisy, slow and unreliable HDD with this SSD you won’t be complaining!

The good thing about this whole set up is that it is so easy and so affordable.  Imation charges only 25 bucks for all the extra hardware bits and the Acronis software that goes with it.  Of course it is not a full function program but it has all the functionality that you need to upgrade effortlessly.

Below you’ll find a table of the options for the M-Class series.  Let me remind you that the M stands for MLC or Multi Level Cells as opposed to the S-Class drives which are single celled.  These are a bit more expensive as this extra reliability is mainly geared for servers and the enterprise market.  Noteworthy is too that this particular drive is a SATA – I drive, not a II. This should make compatible with most older notebooks. The M-Class drives with their value-priced NAND flash chips have read transfer rates of up to 150MBps and reasonable 90MBps writes and start at a mere $275 MSRP for the 64GB version. Capacities are available in 64 and 128GB drives and come in 3.5 or 2.5-inch form factors.

It’s clear that this is a fantastic all-in-one solution for most people (yes, I’m excluding the very technically minded who’d love to create their own solutions…).

This is also one of the few pieces of kit we’ve reviewed that worked just perfectly without any dramas, hassles or issues. And the conversion was fast, befitting the SSD’s aura of Speed, Snazziness and Durability.

Because we recommend this Imation SSD Upgrade Kit so highly, we’d like to give it our Editor’s Choice Award! (it’s probably more than 6 months ago since we last had an entry worthy of this honor!)