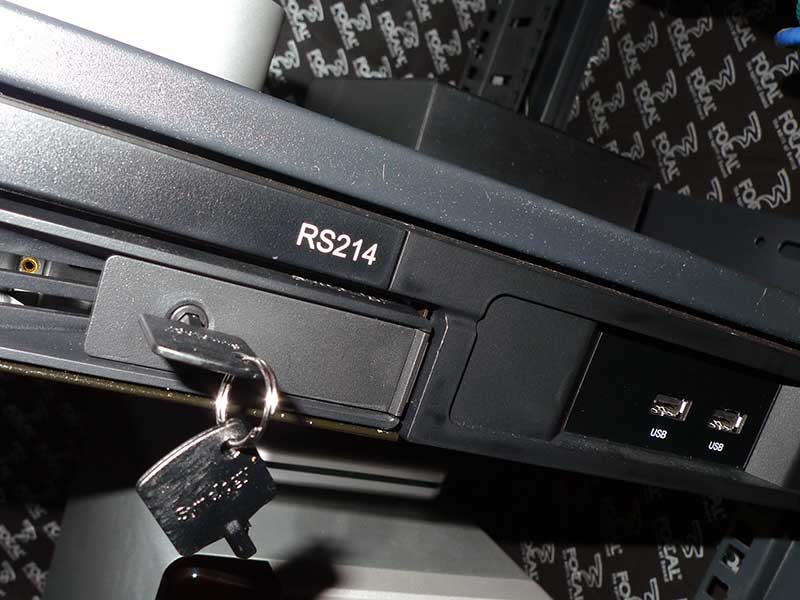 Hot on the heels of our RS812+ and the RX410 reviews, we bring you Synology’s latest rack mounted NAS device, the two bay RS214.

The RS214 comes with everything you need to get started bar an ethernet cable and actual hard drives. Included in the package are a variety of screws for afixing both 2.5″ and 3.5″ hard drives; a power cable; two drive bay lock keys; a rack mounting kit and some sundry paperwork, including an easy to follow quick start guide. 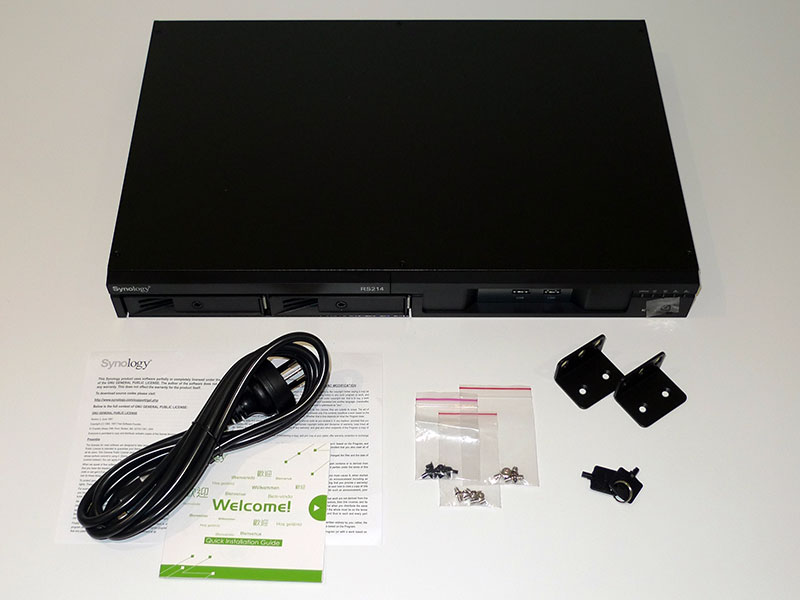 While the unit’s 19″ wide form factor and matte black appearance is fairly standard fare for rack mounted equipment, the overall design and finish of the RS214 is somewhat more appealing than average. From the relatively large glossy power button to the neatly embossed Synology branding on the drive bay caddies, the RS214 looks engineered to be seen.

The front face is dominated by two lockable hard drive bays which are located on the unit’s left (front) side. Next to these is a recessed panel containing two USB 2.0 ports and on the far right is an illuminated power button, mute (pin) button and five status/operating LEDs.

The left hand side of the unit has four large rectangular vents, while the right hand side contains three evenly spaced 40mm x 40mm fans. The rear of the unit features two Gigabit Ethernet ports, two USB 3.0 ports, an eSATA port and a standard three prong power receptacle. The rear also contains a serial port and a reset (pin) button. With a depth of only 288mm, the RS214 is ideal for smaller (see our upcoming Ausrack OnyX Wall review) and larger rack cabinets alike.

After applying the rack mount kit, we quickly installed the 1U high RS214 into our B&R rack cabinet. At just over 3kg, the RS214 was easy to manoeuvre and was affixed to our rack cabinet with little fanfare. 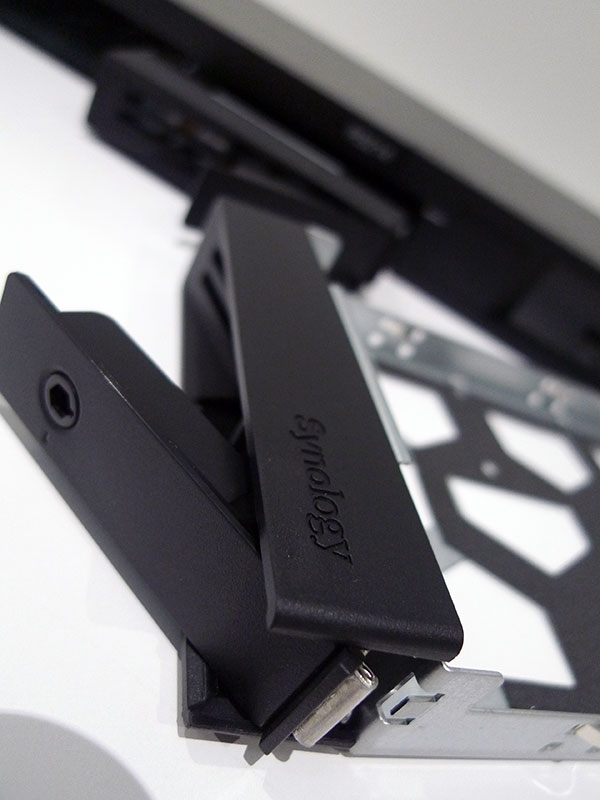 While the drive bay caddies did not have the screwless system of the DS1513+, we screwed in our Western Digital 500GB test drives the old fashioned way.

After slotting in the filled caddies and giving the RS214’s power button a gentle press, we had to wait no more than a minute before hearing its “I’m ready” beep. 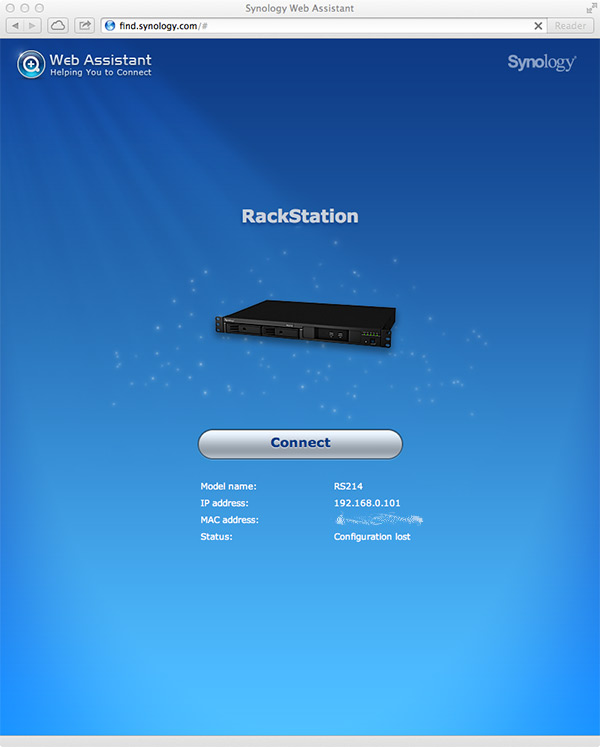 Following the simple to understand pictographic Quick Installation Guide, we opened up a new browser window and navigated to “http://find.synology.com.” Cleverly, this website found the RS214 on our local network and redirected us to its Web Assistant. No more logging into the router and trawling through IPs!

After navigating to the RS214’s Web Assistant, we began downloading (and installing) the latest Disk Station Manager (DSM) software from the Synology website. After about 20 minutes (our Internet connection can be rather patchy) the RS214 was good to go and prompted us to login to its web interface. When online setup and installation is this easy, we really can’t bemoan the lack of a bundled CDROM! 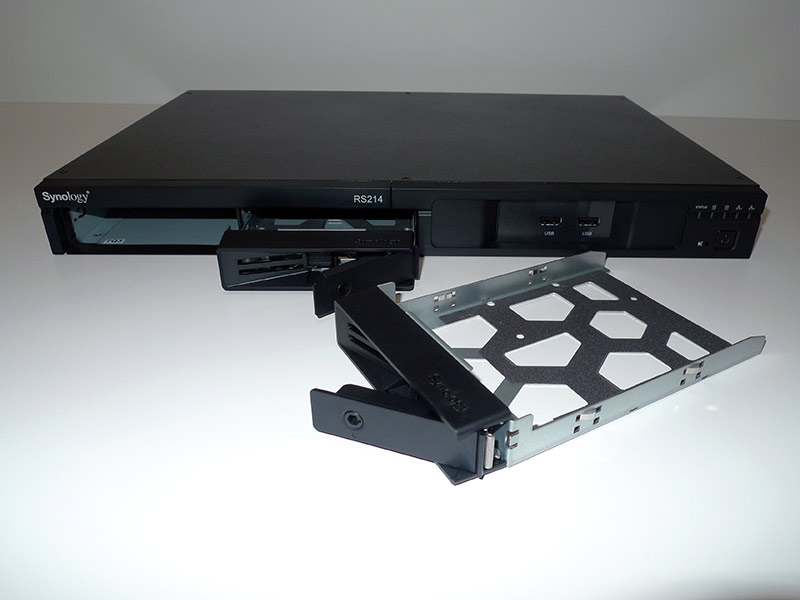 To begin testing and experience some general usage, we used the RS214’s Quick Start Wizard to create a two drive Synology Hybrid RAID (SHR) with one disk fault tolerance. Along with Synology’s Hybid RAID system, the RS214 is also capable of creating regular RAID 0,1 and JBOD arrays via the DSM’s Storage Manager applet.

As we have mentioned in previous Synology NAS reviews, the whole Disk Station Manager GUI (commonly known as DSM) is an incredibly user friendly and easy to navigate interface. All of the RS214’s functions are configurable from this web interface and the latest iteration of DSM, version 4.3 has brought even more functionality and ease of use.

While the RS214 doesn’t have the “+” suffix of the more expensive performance models, the it does run the very same feature packed DSM software.

At a glance, the latest iteration of this software (DSM 4.3) looks pretty much identical to the previous version, although upon closer inspection, there are many welcome additions and feature updates.

One such feature is Cloud Station. Cloud Station allows users to create their very own personal “cloud” storage in the vein of Dropbox or iCloud. Unlike traditional cloud storage solutions, a Synology NAS with Cloud Station enabled, allows users to tailor and customise exactly how (and which) files are synchronised, all the while avoiding the uncertainty of relying on third party providers. Cloud Station supports file versioning for speedy (changed block only) transfers and can be accessed by most popular operating systems, including Windows, Mac, Linux, IOS and Android. And of course, as the administrator of your very own cloud (station), all activity can be monitored (and adjusted) in realtime via the DSM web interface. 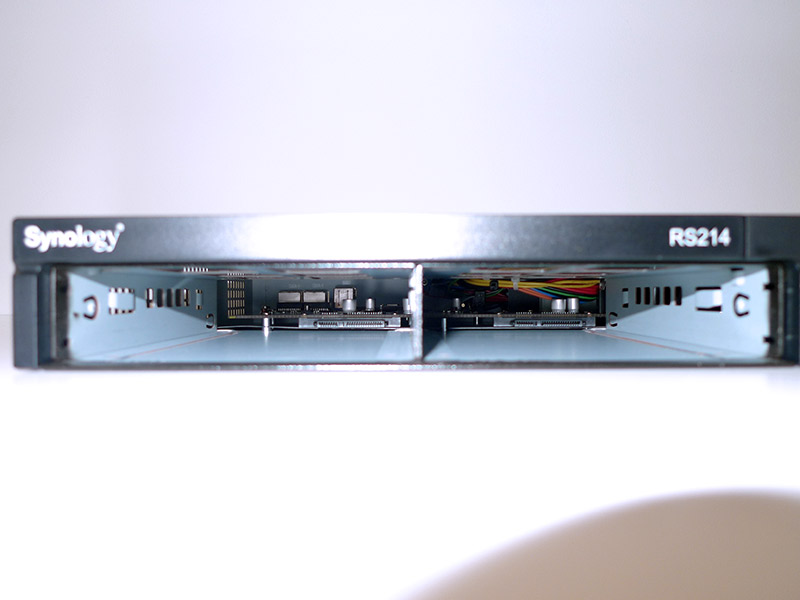 Another great DSM 4.3 feature is the Mail Server. While it may be overkill for Joe Average home user, the Mail Server allows small businesses to setup their own email server with anti-virus and spam filter engines built in. Administrators can filter mail, block mail, auto BCC mail and even explore mail that has been queued prior to delivery. Along with these updates, the latest version of Mail Server also allows both SMTP and SMTPS ports to be customised.

Photo Station has been updated with a new sleek design also with an integrated photo wall and timeline view. Users can use Photo Station 6 to both effortlessly tag photos and edit them via the popular Aviary editor. While Photo Station can be used as a simple photo repository (think iPhoto), it has other advanced features that can really make the Synology NAS the cornerstone of a small photography business – Not only can photo albums be easily created and shared but Photo Station 6 even has the ability to create personalised sites for each user, potentially allowing customers to browse specific photos prior to purchase.

Beyond the aforementioned packages (all of which we hasten to point out, are free), the DSM Package Center allows you to download many other packages such as Git Server, Python, Joomla, phpMyAdmin and even a PLEX media server to name just a few. UPDATE: Unforuntately it appears that the Plex folks are not supporting the RS214’s processor so Plex is not supported for the time being. We really like the fact that these packages are optional installs as not everyone may need all of the features. Of course, having said this, there is definitely something for everyone available. 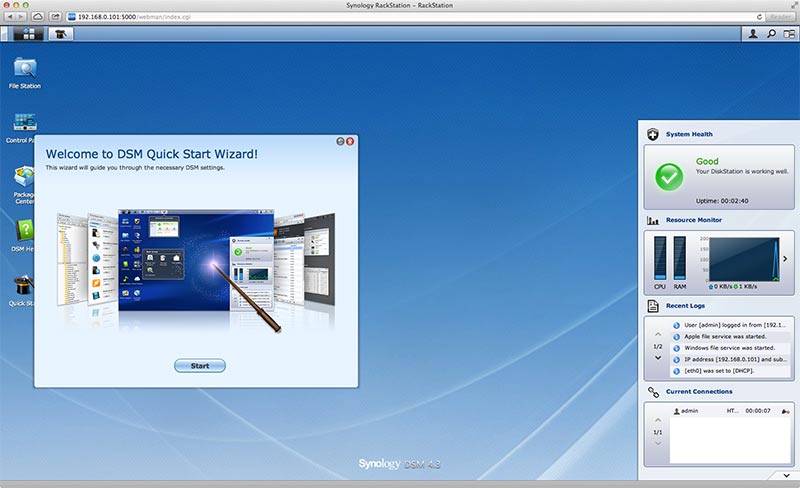 To view a current list of available packages (of which the vast majority are free), visit Synology’s Package Center page.

The new DSM has a number of under the hood improvements also, such as TRIM support for SSD drives, ODX offloaded data transfer for Windows Server 2012 and customisable automated recycling bin cleaning.

While Synology manufactures NAS hardware, it’s the DSM 4.3 softare that converts these storage devices into incredibly versatile servers which go far beyond the capabilities of a regular NAS applicance. In fact, the best way to really experience the breadth of features and the intuitive “OS in a browser” design, is to try Synology’s live (no download required) DSM 4.3 demo.

All timing was done manually via a stopwatch and version 10.3.3 of the AJA System Test Utility was used to acquire transfer speed results.

As expected, the RS214’s test results were somewhat slower than the previously tested RS812+ which is in line with its lower spec (and price point).

Coming straight off the RS812 review, we really didn’t notice any real world speed differences and the RS214 performed perfectly within our expectations. From a reliability standpoint, we found the RS214 to be rock solid and during our month or so of testing had zero problems. Also worth mentioning is that we found the RS214 to be one of the quietest rack mounted NAS units we have seen and its case temperature was also excellent with only minor heat increases even under heavy usage.

During our time with the unit, the RS214 was used as a general storage device, serving a variety of files on our small but busy local network. From streaming large movie files to accessing text documents, the RS214 performed flawlessly. 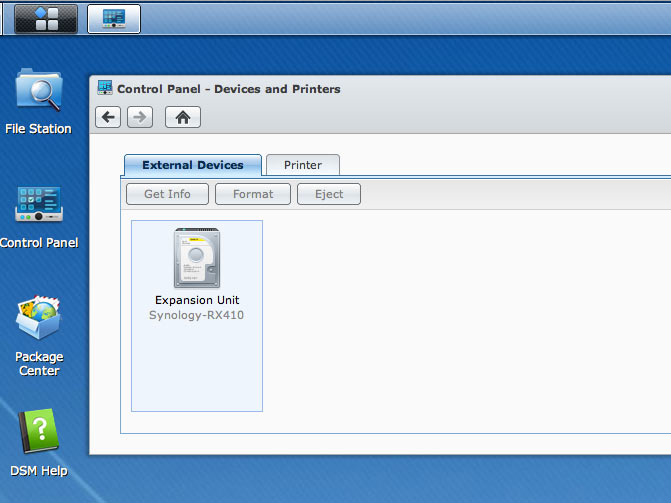 As we had the previously reviewed RX410 expansion unit on hand, we rolled the dice and experimented with connecting it to the RS214 via its eSATA port. The RS214’s DSM interface could “see” the expansion unit but try as we might, we could not actually get the RS214 to access or interact with it. While this result was expected as the RX410 isn’t officially supported on the RS214, we do hope that Synology may consider adding this in a future DSM update. 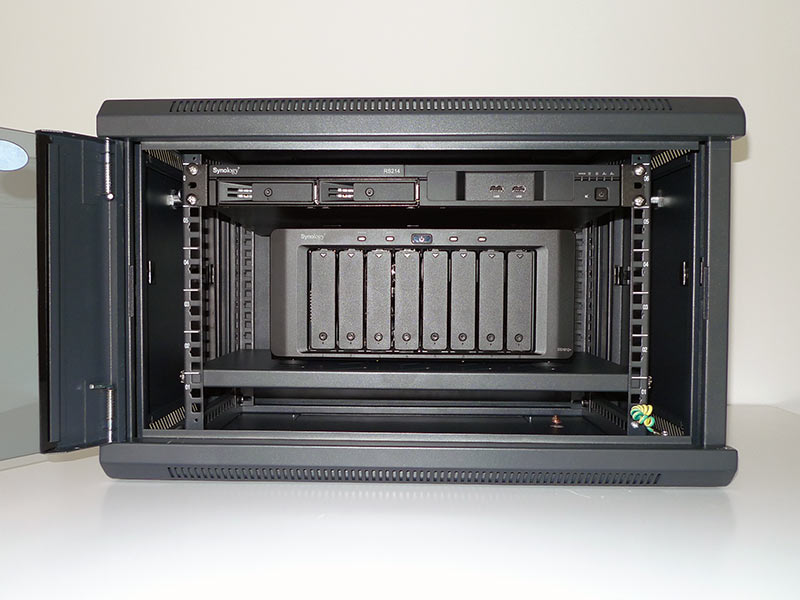 The RS214 is a great little rack mounted NAS device for both power users at home or small businesses looking to secure data and purchase an inexpensive faux-server. It’s two bays can deliver up to 8TB of (non fault tolerant) storage in a quiet and relatively small package – At 288mm deep we found it easily fit into the 4500mm deep Ausrack OnyX Wall rack unit (See image).

The only negative we could come up with – and it’s somewhat of a stretch – was the use of USB 2.0 ports on the front of the unit. While far from a deal breaker, it just irks us that USB 2.0 ports are still used at all when fully backwards compatible (if costly) USB 3.0 ports could’ve easily been used throughout.

Coupled with its feature packed DSM software, the RS214 can be almost anything you want it to be – From a highly configurable email server, a personal cloud storage device or a full featured media server, (like all Synology NAS devices) the RS214 is far more than just a NAS.

The RS214 has a street price of under $700AUD and is available now from most good computer stores. For more information about this and other Synology NAS devices, please visit the Synology’s RS214 product page.