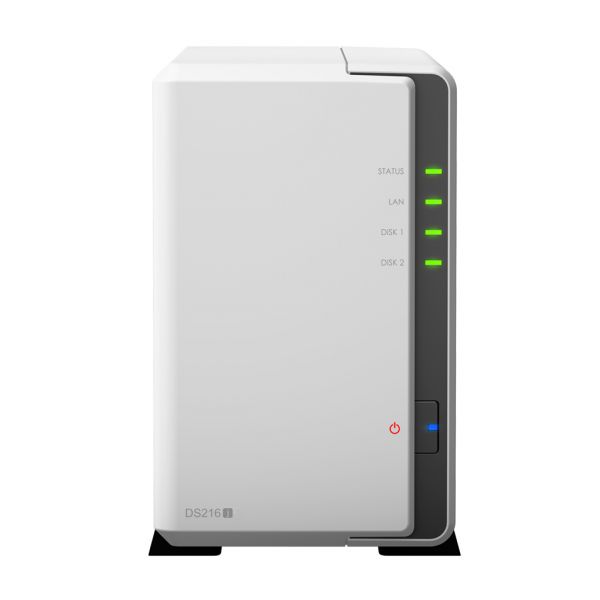 Synology launched the DS216j Network Attached Storage (NAS) recently, the successor to the previous year’s DS215j. The sleek and modern slim two bay form factor and price tag is aimed squarely at the SOHO, workgroups and small office environments. The previous year’s model was well-received by and large, with thanks to Synology, DigitalReviews get to see how the latest revision performs.

First Impressions
Little has changed in the general appearances with this series. Synology has opted to retain the familiar look – glossy white finish, grey trim minimalist approach. On the front is a power button and activity LEDs. All connectivity and plugs resides out of sight at the back of the unit – 2 x USB 3.0 ports, Gigabit LAN port and power.

The DS216j is designed for set and forget. There is no drive trays to pull out, installing drives is as simple as sliding open the chassis to reveal the two 3.5″ drive bays. There are nice little touches with the drive cage and mounting screws being padded with small strips of rubber to dampen mechanical drive vibration. On the down side, if you are looking to fit a 2.5″ drive or SSD, optional drive trays are not included in the deal although you could probably get away with some DIY magic.

Like many products these days, there are no other user upgradeable components in the DS216j – everything is on the main board. The combination of 1GHz dual-core Marvell Armada 385 processor and 512MB of DDR3 memory should be sufficient for the intended market while achieving decent power efficiency.

In Action
The DS216j is shipped with DSM 5.0 but immediately upgradeable to DSM6.0, the latest DiskStation Manager. DSM6.0 is not an in-your-face massive change from the previous version. The initial set up is a little more refined, the already polished interface had been taken to a detailer and came back with a shiny finish. There is no need to relearn anything if you are upgrading from DSM 5.0, and if you are new to it all, the interface is very intuitive to pick up.

With the new major revision DSM is now a 64-bit architecture on compatible models, taking advantage of modern CPU efficiencies. The Marvell Armada 385 CPU is a 32-bit architecture, but designed for NAS. There is also support for 4GB+ memory allocation on a single thread to support large scale applications. Previously built-in applications such as Storage Analyser, Web Station, PHP, Hyper Backup and Text Editor are now modulised to provide more flexibility, ease of maintenance and reduced base load on the DiskStation. As a entry level device, there is little in the way of system redundancies – single power source, single network point. Synology claims a read performance of 112.75 MB/sec and writing over 97.6 MB/sec.

The fan in the DS216j is incredibly quiet, which means you can place it anywhere including right next to the TV if you so wish. The front LEDs have up to 4 levels of brightness from off to full, which can be scheduled so there is no fear of it being too distracting.

The pillars of DSM – Photo Station, Video Station and Music stations has been tuned with better resource management with transcoding and indexing optimisation. In particular Video Station has be redesigned with offline transcoding capabilities. Photo Station allows for organisation of photos into customised categories, smart albums and blogs posts. It can even watermark your photos and link them easily to social media. Audio Station has a built-in lyrics plugin, Internet radio, and support for DLNA, AirPlay and Bluetooth speakers. File Station has an improved search feature with metadata tags support for faster and better performance in finding what you want.

DSM 6.0 also now forces the creation of administrative credentials with passwords which I think is a good thing. Although it certainly is not going to protect anything if you just write it on a sticky note and stick it to the side of the unit. While on the security note, advanced virus scanning comes included with customisable schedules. On top of that, DSM comes with basic firewall and Denial of Service support. Ideally malicious traffic should be kept at the perimeter of your network but it is nice to know there is a last line of defense.

The push for the office environment gets real with the availability of Note Station and Spreadsheet apps on DSM and on iOS and Android devices. Note Station is an advanced product in that it is not simply a word processor; it has a to-do and reminder feature, a digital note-taking ability with version and access controls. It is one of many value added feature that makes DSM so powerful. There are many other Add-On packages for DSM that will extend the abilities of your DiskStation, but the DS216j is an entry-level device, your mileage with performance will vary depending on what you load. 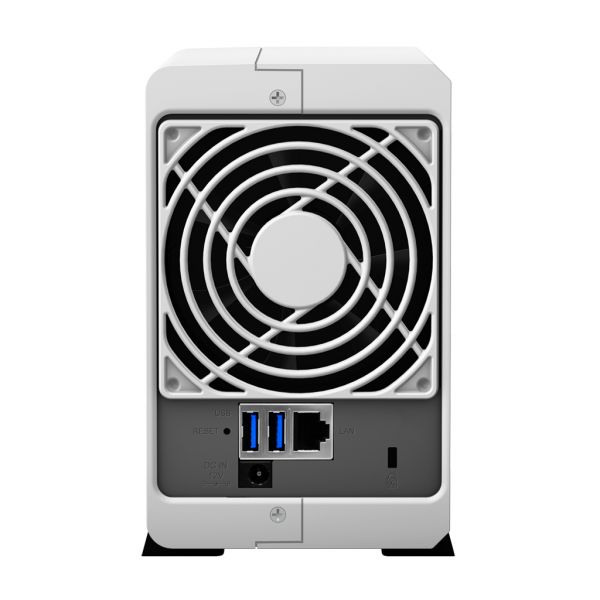 Gripes
Bearing in mind the market DS216j is aimed for, there is really little to complain when the software is so feature rich. The 512MB of RAM feels a little light on but unless there are multiple tasks running that are resource intensive, the unit holds up remarkably well. That is not to say a little more love with memory would not go astray.

A front facing USB port would not go astray either. On that note, a front facing memory card slot would be a fantastic addition particularly if it can back up straight into the DiskStation for streaming.

Conclusions
The combination of DS216j and DSM6.0 is really a no-brainer for anyone looking to dip their toes into the crowded NAS storage market. It is no-doubt a budget conscience edition from a hardware perspective, but the operating system is all class. The user interface is incredibly friendly and intuitive, and it makes perfect sense to consolidate family memories, share files, home work in one place instead of spreading it over numerous devices. Combined with the DLNA media server, multi-device backup, user access control and document version control, sync to cloud abilities, remote access from anywhere gives this little Synology unit a very big bang.