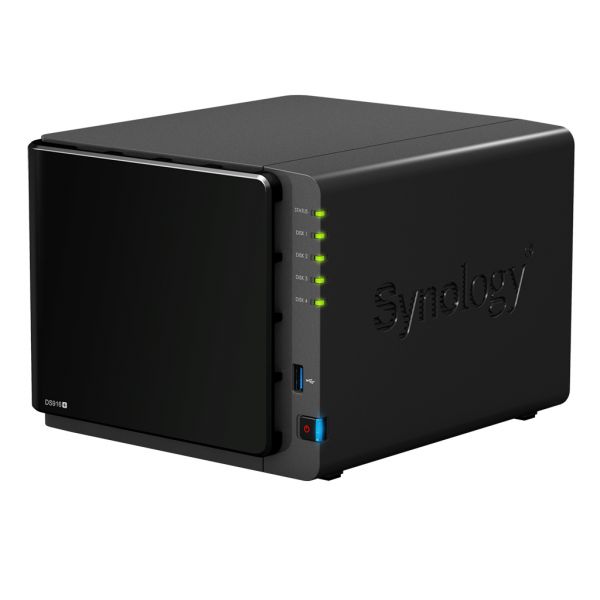 Progress is inevitable, each year hardware gets a little spec bump with some oomph and a bit of ahh.

DigitalReviews.net have had been lucky enough to have the Synology Diskstation DS916+ on the test bench for quite some time.

The DS916+ is pitched at the professional NAS user segment, with productivity and scalability in mind.

This time around DigitalReviews will focus on the productivity side of DSM.

First Impressions
The look and feel of the Synology NAS have been covered in a lot of details in previous reviews here. The piano black finish and clean simple look remains. Similarly DiskStation Manager (DSM) has been put through its paces.

Internally, the processor has been bumped to a Intel Pentium N3710 quadcore processor running at 1.6Ghz and burst to 2.56Ghz. Memory wise it comes either as a 2GB variant that has some limitations to the DSM features, or the 8GB variant for up to a medium size office.

In Use
DSM has long left the days of pure storage behind. With business productivity as the focus, the add-on offerings are more comprehensive and fully featured than ever. A key feature of the DSM productivity goal is cloud connectivity. What differs DSM from other offerings such as Google Apps and Office 365 is that the data resides on the DiskStation itself, wherever it is physically connected by you. From a data jurisdiction point of view, the physical location of the data can be guaranteed. In comparison, most public cloud offerings have your data distributed anywhere in the world.

Out of the box DSM offers “Office” which is an offering similar to Google Docs, with a word processing and spreadsheet application. The launch interface is clean and intuitive, with all your documents showing on the same window with ability to differentiate files that are shared with you or shared with others. Documents are created by adding new documents at which point you can create a word processing document, or a spreadsheet. These can also be created to be encrypted with a password as well.

Word processing feels a bit like Google Docs, with all the expected features such as fonts, images, tables, charts and shapes. Essentially for most users you can cross over from a Microsoft Word offering without much trouble. It would be seamless if you are moving from Google Docs.

The Synology spreadsheet offering is a very basic offering for simple requirements. As a power user of Excel, the DSM offering would rank lowest out of Microsoft Excel and Google Sheets. It is sufficient for basic calculations and some data manipulations and filtering. More advanced features such as pivot tables and forms are not available at the time of this review. 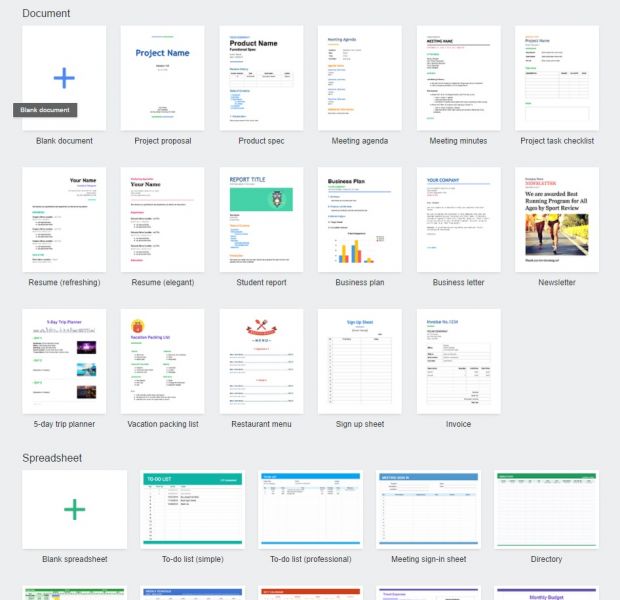 One DSM application that I do personally use heavily is the NoteStation. Ever since Evernote changed their free offering to a limit of 2 devices, I have bailed that boat. For me the Evernote 2 device limit was a dealbreaker, along with the pricing structure which would have given me a subscription of Office 365 with all the additional functionality that would have come with it. With very little fanfare I migrated all my Evernote data over to NoteStation via the built in migration function on the Synology end. It took a while to pull all my data in but everything came across after a few hours, tags, images and folder structure.

From a functionality point of view, NoteStation does most of what I am used to having with Evernote. There are some missing features such as screen capture and annotation, but I have learned to live without. But since the migration it has been used on a daily basis.

Additional Features
DSM is an extensible platform with healthy amounts of development from both Synology and third-party. There is add-ons for Calendar, Chat, Mail, MySQL, VPN server as well as web development platforms. A full list is available here.

Business Use Cases
For quite a while I have been leaning away from the traditional Windows server and all its hardware and licensing encumbrances in the SoHo world. With little planning and smart leverage of cloud services, the DiskStation can be at the heart of the business workflow with flexibility to work from anywhere and most devices.

With the additional cloud sync connectivity, I have a hybrid cloud with my Dropbox, Google Drive, Amazon S3 connected to the DSM for backup and recovery purposes. Data can be replicated to another internet connected Diskstation for disaster recovery purposes.

DSM supports virtualisation of the OS in DiskStation. There are two methods: virtual DSM which containerises DSM itself for multi-tenancy support, or Docker DSM which is a lightweight virtualisation with limited feature sets: 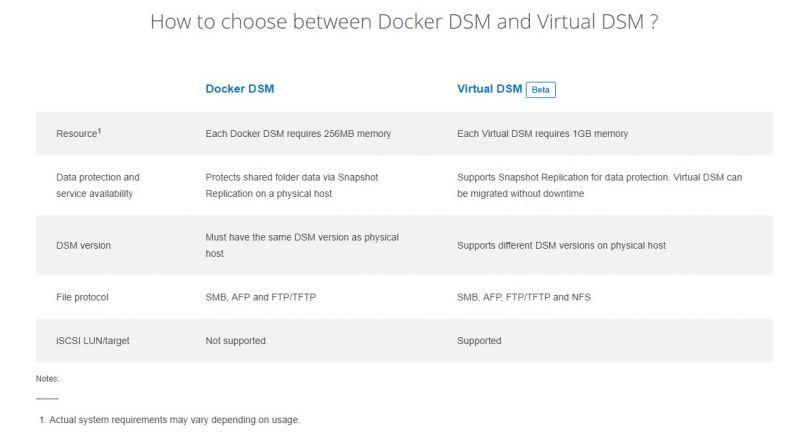 It is not uncommon here for some small businesses to share the same premises, it would be a cost effective way to provide backend IT services.

Conclusions
For the right environment, the DSM can provide a private or hybrid cloud business solution as a server replacement. Certainly the heart and soul is in the right place even if it is not as full featured as some other offerings. The ability to expand with an external drive cage to cater for up to 5 additional drive means storage capacity is less of an issue as data storage requirements grow.

My one major gripe is the lack of built in exFAT support and the decision to make it a paid add-on. Given that DSM aims to be a cross platform product, it seems to be a petty business decision to charge the USD$3.99 to enable it.