The Genie is Out of the Bottle: QNAP Put it in the QGenie Mobile NAS 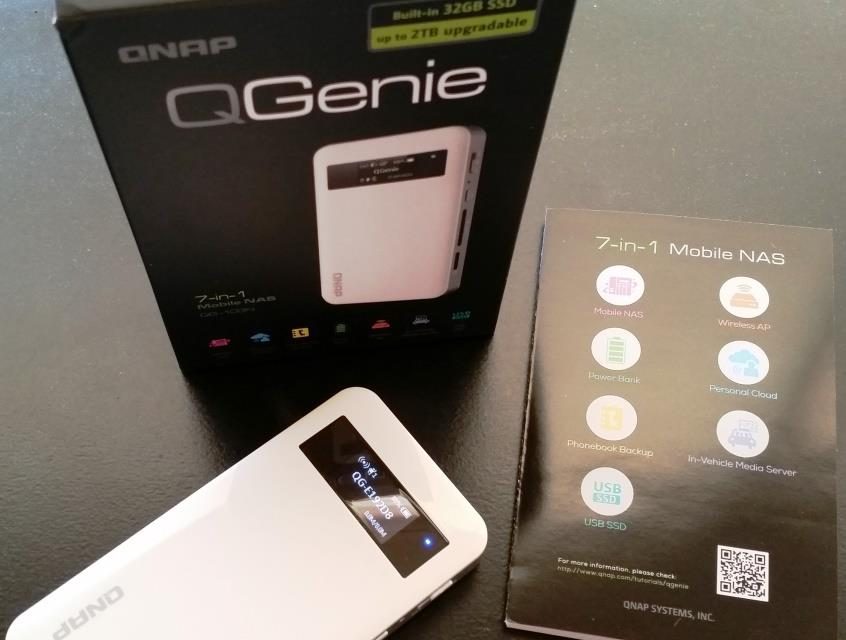 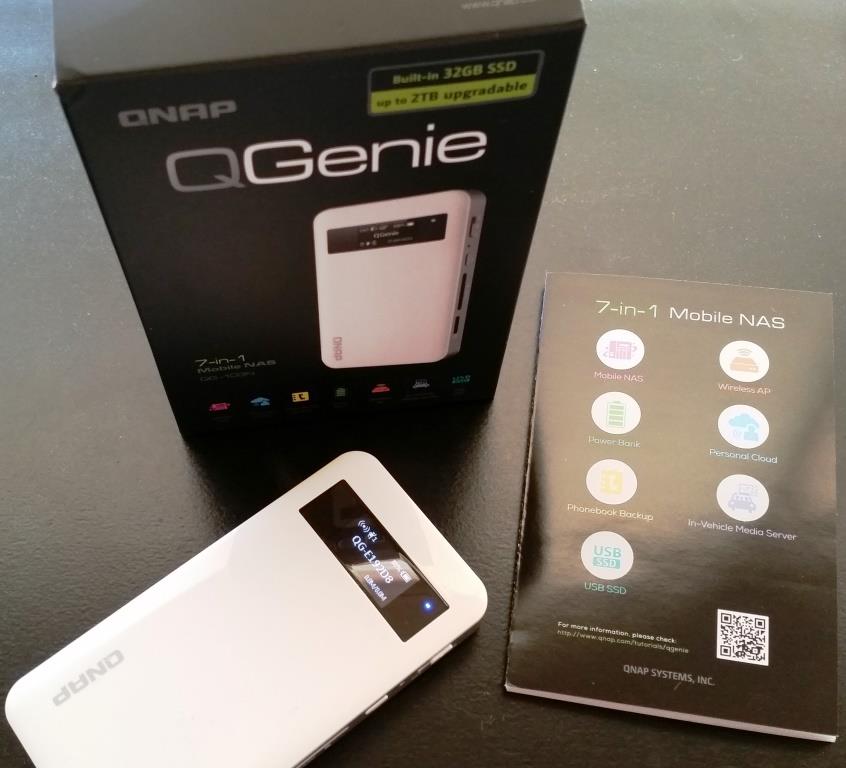 The QGenie is the smallest of all the NAS units we have ever reviewed. It’s positively tiny and probably is smaller than your smart phone!

NAS is for sharing, and we all know that. So expect file sharing but also Internet sharing and even power-sharing. And more.

Let’s see how it all works.

The QGenie has a 32GB SSD, powered by a 600 MHz CPU. It has a USB 3.0 and LAN port and SD card support. The built-in battery is good for 3000mAh and there’s a small OLED display to tell you what’s happening.

If you’re just looking to extend storage space on a smartphone there are plenty of cheaper solutions than the QGenie. But this device is about sharing by allowing up to 20 users to wirelessly connect to this device and make the uploaded files available to the other users. This is particularly handy when a group is working on a project together or when you’re travelling in a group. For even greater flexibility in access to files the QGenie can also serve as a gateway to the myQNAPcloud service, as well as Qsync, and Qfile mobile apps.

It is almost a given that the QGenie plays very well with the Turbo NAS units from QNAP, making it easier to transfer files through the one – touch copy function.

The built-in battery will last for a good working day but in a pinch might also be able to recharge a mobile phone. Always handy.
Similarly, it can serve as a wireless accent point.
Finally, even though the storage capacity is fairly limited at 32 GB it can serve as a backup unit for your phone books and other important data.
While the box says that it is up to 2 TB upgradable, you can only do this through SD cards, the biggest standard SD card at the moment is only 512 GB…

You can expect pretty fast file transfer if you connect the QGenie to a computer through a USB 3.0 with file transfers of up to 120 MB/s read and 40 MB/s write speeds. 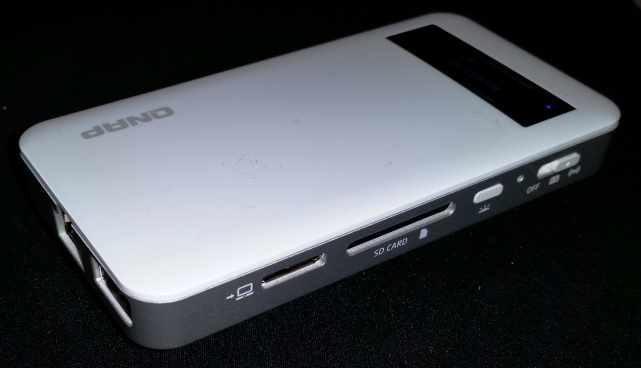 So How Does It Work out in Practice?

The QGenie is a fair bit smaller than my Galaxy S5 but it is also about twice as thick. Glossy white on top and silver all around and back.
Charging takes about three hours and I have noticed that you don’t seem to be able to use the Wi-Fi function when it is being charged or plugged into a PC. It takes about 40 seconds to boot up the system which is surprisingly long.

After installing the Qfile app on your phone we can discover and connect to the QGenie. The initial admin password needs to be changed and that’s where the Qfile software got into a bit of a loop: I had to submit the new password about half a dozen times before it finally “took”.

I uploaded about 35 photos and videos from my phone which was sent across at about three or 4 Mb per second. Not particularly fast and when they are uploaded there is only an icon for the individual photos but not a thumbnail, which makes it hard to select any particular photo or video to download again.
Uploading can be made totally autonomous in the Settings so that automatically any photo you take will be uploaded to this device.

Uploading music is fairly easy once you realise that full albums are not supported. Only individual songs.

At around 160AUD you get yourself a multifunctional device that is particularly useful in a group setting, in other words where you have a need to share whilst mobile. The QGenie doesn’t perform any magic tricks but the power bank function is always handy to have even though its own battery life will be severely curtailed as a result.

32 GB in fast storage is not a lot but fortunately there are some expansion slots for extra SD or USB storage. Being able to function as an access point for up to 8 users at the same time is great.
Overall, a handy tool and a step up into the world of network attached storage systems. And that is probably how QNAP sees this baby NAS…