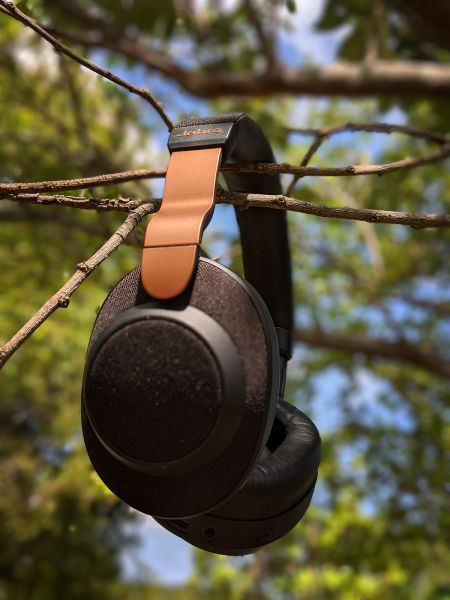 Last year, Martin got to review the Jabra Elite 85h and gave it the DRN Editor’s Choice award. When I was offered a chance to review the Amazon Australia exclusive Copper Black variant, I jumped at the chance to see what the fuss is all about.

First Impressions
The heart and soul of the Jabra Elite 85h has not changed, but the body has now been dressed at a couture show and does it ever look stunning. The body of the 85h is a sleek black, swapping plastic for a meshed like fabric covering each ear cup, comfortable faux leather. The gorgeous burnish copper is all along the extensible band all the way to the clasp on the ear cups, and highlights the Jabra logo on both sides of the headphones.

Aside from the colour scheme, the technical specifications of the Jabra Elite 85h remains unchanged to the other variants. It still features an impressive total of 8 microphones and Active Noise Cancelling. 6 microphones are used to enhance call quality, and 4 microphones are used for ANC. The maths don’t lie, but 2 of the microphones pulls double duty which does make the numbers add up.

There are 5 buttons controlling the functions of the Elite 85h, 3 of them are rather discreetly hidden under the fabric over the right ear cup. There is a visible button on each ear cup, and the right side also features a USB-C charging port and a 3.5mm audio jack.

The button on the left ear cup cycles between ANC, off and HearThrough. The counterpart on the right ear cup cycles between Voice Assistant and mute microphone. The three buttons under the fabric of the right ear cup are all in a line on the vertical plane – the top one is for volume up, and next track if held down. The center button which is a circular depression on the ear cup is for Answer/End calls, Play/Stop music and if held down, Bluetooth pairing. The bottom button funnily enough is for volume down and previous track if held down.

In Use
The Jabra Elite 85h has an unique power switch – by twisting the ear cups from their storage position into the listening position, they are powered on. The first thing is does is to inform you of the battery status.

Admittedly I was hoping to use the 85h for an extended period over the holiday season, but I was not about to risk the headphones when I was painting a house – for that I had the MegaBlast. They did find their place on my head once I settled back into work, in a construction zone. And boy does the ANC ever had to work hard amidst the noise of pneumatic driven power tools.

Even with ANC off the sound isolation was impressive, dulling down the majority of the construction noises in the next room. With ANC turned on, I was bathed in a cone of silence and just the stellar voice of Frida Öhrn caressing my ears and filling my soul. It is hard to describe Öhrn’s voice, an exotic mixture of husky, intimate and raspy. Listening to Oh Laura’s “Release Me” (original version) was an absolute delight on the Elite 85h, every note and every word came through like a lover whispering to my soul and sending shivers down my spine. For a totally different experience on the same song, the hypnotic electronic-infused sound of the Dark Mix really shows how the range of the Elite 85h.

Changing pace to Wolfgang Amadeus Mozart’s final symphony, Number 41 in C Major, KV 551 “Jupiter” performed by Academy of St Martin in the Fields. “Jupiter” is an unusual composition and is widely acknowledged as one of the most interesting symphonic movements written by any classical composers. The majesty of the movements and gestures is on full display with the Elite 85h, doing justice to Mozart’s composition from the start to the end where it builds to a dramatic symphonic movement to finish. Those 40mm custom-engineered drivers are really something.

Jeff Buckley’s Hallelujah was reported by TIME in 2004 that “Buckley treated the 7-min. song like a tiny capsule of humanity, using his voice to careen between glory and sadness, beauty and pain …” It is rendered exquisitely by the Elite 85h and truly sends a shiver down my spine every time.

The Jabra Elite 85h are easily one of the most comfortable headsets I have used. Contrary to what some people believes, the big head I have is not actually physical and usually by about 20 minutes my head would be feeling like Oberyn Martell’s when The Mountain got his hands on him, and my ears are burning. Not so with the Elite 85h, I was easily going at least an hour and a half without any discomfort which is remarkable for me.

Other Features
Part of the strength of the headphone package is the Sounds+ app, which allows customisation of “SmartSound”, the Jabra adaptive noise-cancelling technology. Jabra has partnered with audEERING to leverage AI algorithms and claims to analyse over 6,000 specific sound characteristics in real time. The idea is for the Elite 85h to sample the ambient environment you are in and use the SmartSound algorithms to automatically adjust the sound to ensure consistent voice and audio quality in different environments in real time. The Sounds+ app allows the user to chose between three modes – Public, Commuting and Private which can be set manually if you prefer not to involve Skynet.

The Elite 85h claims a fantastic 36 hours battery life with ANC on, or 41 hours with ANC off. I have been testing it with in a mix use case and it is getting into the mid-30 hours mark without issues. The USB-C port as a fast charge feature, 15 minutes charge for 5 hours of use.

A very handy feature is the on-ear detection, playback is automatically paused when you take the headphones off your head, and resume playing when you pop them back on your head.

Belying the fabric covered ear cups, the Elite 85h is IP52 dust and rain resistant – Ingress of dust is not entirely prevented, but it must not enter in sufficient quantity to interfere with the satisfactory operation of the equipment; complete protection against contact; vertically dripping water shall have no harmful effect when the enclosure is tilted at an angle up to 15° from its normal position.

The buttons on the Elite 85h are actual buttons, which just warms the cockles of the heart for this old dinosaur.

Like all the current crop of Jabra products DRN has recently reviewed, the Elite 85h can pair with up to 8 devices with 2 active connections at the same time. It also supports either Google Assistant, Siri or Alexa – only one at a time.

Gripes
The only issue I can flag with the Elite 85h is that there were some occasional Bluetooth issues. I do work a lot in wifi saturated environments which is probably a significant contributor.

It would be nice to have a USB-C to USB-C cable instead of a A to C cable.

Conclusions
The Jabra Elite 85h Copper Black is the top of the line offering from Jabra and it certainly is an outstanding headset with excellent sound and noise isolation capabilities. For me personally they are hands down the most comfortable headsets I have used, and there are quite a few pretty much left in the box because I could not stand extended periods with them on my head. I can certainly see why Martin was so excited about them!

The Copper Black variant is an Amazon Australia exclusive and RRP at AUD$499. While they are not cheap, they are comparable in price to the competition. 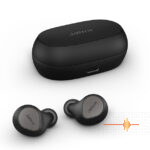