Logi MX Keys – Low profile but with a big personality 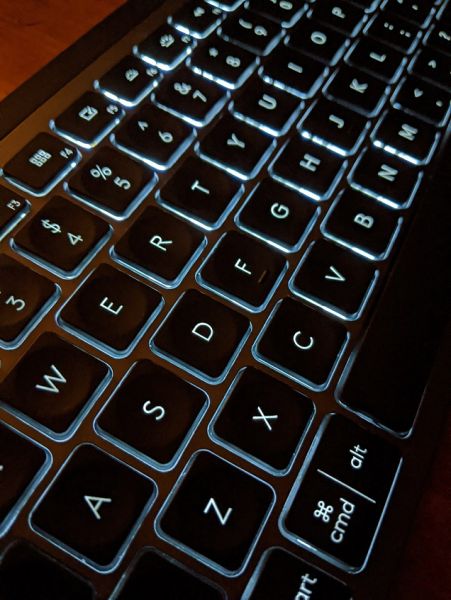 For my next trick, I am writing the most challenging review I have had done to date. The Logi MX Keys landed on my desk as an early Christmas present, a desk which was dismantled shortly after and packed for a staged move to a house which is still not ready for habitation. Nevertheless at DRN we press on in the face of challenges and bring you our thoughts on the MX Keys.

First Impressions
I have to admit over the years, I have been less pedantic about the keyboards that I use. Most working days I could be using half a different keyboards to do my job. My gaming days are long over and Wing Commander Prophecy was the last game I played on the PC. Back then there was no need for fancy schmancy macro keys in the game, the ps/2 port was still king and USB was a year old.

However with the house move looming and the chance to set up my workstation properly, a new keyboard was definitely on my mind. As luck would have it, the MX Keys dropped into my lap and I had to fast tracked my new setup in a “war zone”.

Upon unboxing, I was pleasantly surprised by the weight of the MX Keys. It is a good looking unit with the graphite metal frame and quality black plastic keys with white lettering. There is no real flex to the unit but if you do push hard enough below the space bar then there is some discernible movement. The keyboard is a membrane style, each individual key is a small rounded square (or rectangle for some) with a circular indentation in the center.

The keyboard has a minimalist footprint despite being a full size affair with the keypad attached, the frame around the keys is tiny with a black plastic bar at the top which forms part of the non-adjustable incline.

In Use
I am writing this review on the MX Keys, and it has been a staple part of my working arsenal whenever I get to perch at my workstation. First up it is not a peripheral if you are just needing something to type a few URLs for web surfing, or hammer out the occasional email to family and friends. The MX Keys is crafted with a premium feel, thoughtful design and features that are geared for power users and creatives. It is also designed to partner with the MX Master 3 which we previously reviewed here.

With absolutely no shortage of experience with Logi gear and Unifying receivers, it took no time to set up the MX Keys with both my personal and work machines. The Logitech Options software making it a painless process.

The surprisingly heft of the MX Keys made it sit well on my desk. There is no movements at all even when I am typing fast and furiously as is my usual 100+ wpm style. The flex that I noticed earlier is not apparent during actual use. If you have been comfortable with OEM cheap and nasty keyboards, such as the bundled HP, Dell, Lenovo types, then the MX Keys is a night and day upgrade. The MX keys is far more comfortable and responsive then the run of the mill ones, the keys operating quietly with a nice springy scissor-style switch.

It did take me a while to get used to the the MX Keys layout. In particular the double width Esc key caused no end of dramas with my muscle memory that is accustomed to a much smaller Escape key. For a few days I found myself constantly hitting F3 instead of F4 but like everything else though I adapted and got used to it. While I appreciate that key feel is a deeply personal choice, the MX Keys feels right to me.

The backlighting capabilities is a definite highlight for the MX Keys. Each key is individually backlit and instead of it being constant on, a proximity sensor detects when your fingers are near before lighting up. A built-in brightness sensor samples the ambient background light and will adjust the brightness accordingly. In a pitch dark room, the backlight would be on brightest and there is absolutely no issues typing in the dark – something I can easily attest to since I have no working lighting circuits at all at the moment. There is also a manual adjustment available if you find the automatic settings not to your liking.

Other Features
With the Logitech Options software, the features of the MX Keys can be extended. One feature that I really appreciate is the ability to disable certain keys, namely Num lock, Caps lock, Scroll lock, Insert (thank the lord!) and/or Windows/Start key.

Also with the Options software, you can reassign most of the top row of keys. By default these are for media control serving double duty as function keys. The reassignment can be global (all applications), or for specific software such as Microsoft Word, Firefox or Adobe Photoshop. For example in Photoshop you can assign a media key to create a new layer or bring up a dialogue box to change a brush size.

Like all of Logi’s premium line, it can be used via Bluetooth or the Unifying receiver. The latter is a better bet since it allows multiple Logi products to be paired to the same receiver and work with Logitech Flow. The MX Keys also allows pairing up to three devices, easily switchable via three dedicated buttons at the top of the keyboard. It supports Windows, MacOS, Linux, Chrome, Android and iOS.

If you have never experienced the joys of Logitech Flow, do yourself a favour and set it up. It permits compatible mouses and keyboard to cross platforms and machines, with a copy and paste function that works for text as well as file transfer.

The charging port is a very welcomed USB-C type, Logi claims 10 days between charges and I am well on-track to get there right now. With backlight turned off, Logi claims 5 months of battery life. There is a physical power off switch which I have a habit of using when I am calling quits for the day. 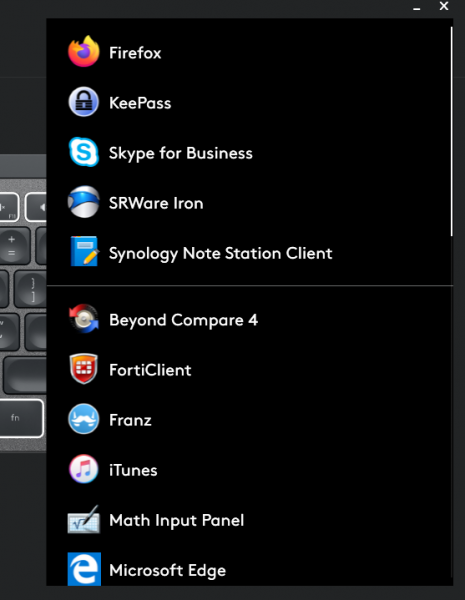 Gripes
Not so much a gripe but a statement of fact, backlighting is limited to a cool white given the target market is working professionals. There are no RGB settings.

Surprisingly there is no incline adjustment at all. The MX Keys is set at a laptopsque pitch angle and it is all you will get. An official palm rest is available as an option extra which is a bit on the nose considering the cost of the MX Keys and it’s status as a premium product.

Key reassignment is on the basic side, I wish I can program macros to really push the boundaries with my productivity. Hopefully a future release of Options will allow this to happen.

Conclusions
The MX Keys is certainly a good product, a keyboard with a fantastic tactile feel. Some interesting design decisions such as a lack of incline adjustment, and key reassignment limitations cripples what can be an amazing productivity tool. Even when paired with the MX Master 3, I can’t help but feel that the sum could be so much greater. The potential is there, Logi just needs to grab the bull by the horn.