The new Android based Shield TV is designed to bring a much enhanced streaming experience to tired TVs with a 4k upscaler and the best of the best in audio and video, courtesy of Dolby.

The Tube and the Toblerone…

The biggest thing about the new Shield TV is the redesigned remote.
It’s a svelte little unit, stylish and a bit mysterious.
Why, you ask?
Well the triangular Toblerone-shaped remote is supposed to have a couple of AAA batteries included but I can’t for the life of me find the familiar hatch for when the batteries need replacing…
Clever design or frustrating built-in obsolescence?
Turns out the whole back slides off with some effort and with more effort can be coaxed back on.
Style won out on this occasion!

However, functionally, the remote is a real beauty!
Backlit buttons that come on when you pick it up, a finder feature for when it slides into your couch cushions and a dedicated Netflix button.
It also has a microphone button (saves typing in long searches and you can also control smart lights) and a programmable button to call up any up function.
Best of all the remote feels really nice in your hand.

The Shield TV unit itself is also radically redesigned: it is cylindrical shaped – the Tube – with cables at both ends so that you can throw it behind your TV.

The setup is simple: plug the power cable into one end of the Tube and a HDMI cable in the other end. Hopefully you have one of these lying around as it was not included in the package. HDMI cables are not expensive and could easily have been included in the box for a hassle-free experience for most customers.

Connect with a TV and have your Android phone ready as it will copy your login details to the Shield unit.
Setup goes fairly quick but gets delayed when it finds a 120+MB update to the software. Once that’s been downloaded and applied be prepared for the… 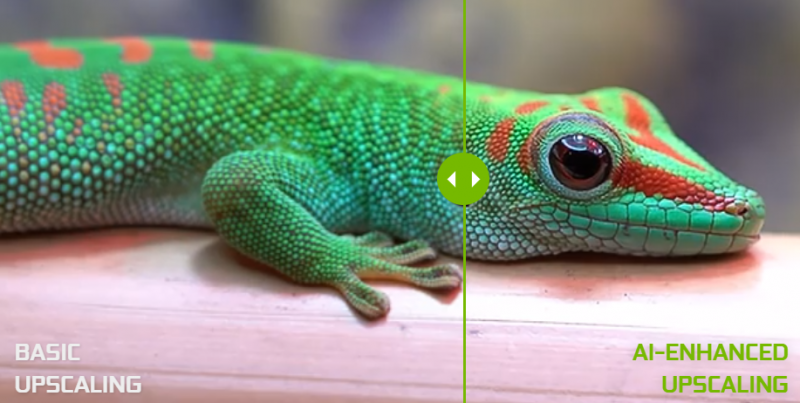 These days everything that’s labelled AI is supposed to be magic but there’s more to 4k upscaling than just marketing speak. But you have to have a 4k TV to begin with. It can’t upscale when there are not enough pixels to begin with…

It’s an interesting feature which you can set at various levels from basic to very high upscaling. Some people seem not to like it and switch it off altogether. Have a play around with the demo mode so that you can see on a side by side comparison how certain upscale settings affect the picture. Some TVs already have upscaling features but the Shield will probably be faster than anything out there.

And at a time when streaming quality might be degraded as suddenly everyone is sucking from the same internet pipe, this is a great way to enjoy very high definition streaming without paying through the nose for data (not everyone has NBN or unlimited data).

So the 4k upscaler is a nice feature but what I really dig is how fast the whole system is. The new Tegra X1+ processor is probably not even breaking a sweat.

For the casual streamer it is definitely overkill but not for gamers. This is the box to get for serious aspiring Formula 1 drivers, certainly now that all racing have either been postponed, cancelled or gone virtual.
And heroes to rescue this sorry planet have always been virtual…

Nvidia is the top name for gaming enthusiasts and has been that for some 2 decades. Graphics is their forte and they are synonymous with top notch GPUs.
So if you already have a GeForce RTX or GTX-powered PC, you can now effortlessly cast your full catalogue of games to your TV for a bigger and more immersive gaming experience with NVIDIA GameStream. 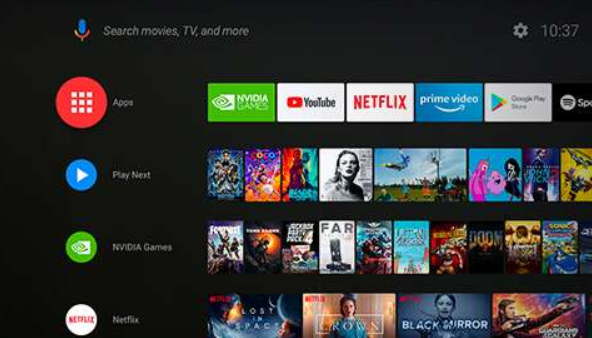 Streaming the World into your Home

There are quite a few apps already on the home screen, including the big ones like Netflix, YouTube, Stan and some local streaming channels like ABC, SBS and GWN. Of course, any app you like can be put on the home screen.
I like the ability to totally customise the home screen with only the apps and categories that I normally watch.

On personal preferences: the Settings allow you to go deep into everything and tweak things to your taste.
Generally, I’ll go with the default settings first, become familiar with everything and then start to personalise.
One of the first things I did was to pair my Logitech Z337 using the Shield’s BT function, something I could not do with the Roku device that has served me well for many years…

Some of the other possibilities of the Shield TV are indicated by the hardware specs, like 2GB RAM, 8GB Storage plus the microSD expandability.
Add to that the 802.11ac Dual Band MIMO Wi-Fi and the Bluetooth 5.0 + LE and you’re getting the picture: it’s quite a capable little unit.
The power comes from the NVIDIA Tegra X1+ processor which is coupled with their 256 core GPU.

Being based on Android the Shield TV has Chromecast built-in. And naturally the Shield works with Google Assistant and Alexa.
Forgot to mention the Gigabit Ethernet port as sometimes a wired connection is better than streaming hi-res content over Wi-Fi.

Only thing really missing is some USB ports but that’s where the next model, the Shield TV PRO comes in which we hope to review in an upcoming article. And that’s when we will go deeper into the features and possibilities of both units and the differences between them.
For a teaser: the TV PRO allows for a Plex Media Server and unlimited storage via USB attached hard drives in addition to its own increased memory and storage. 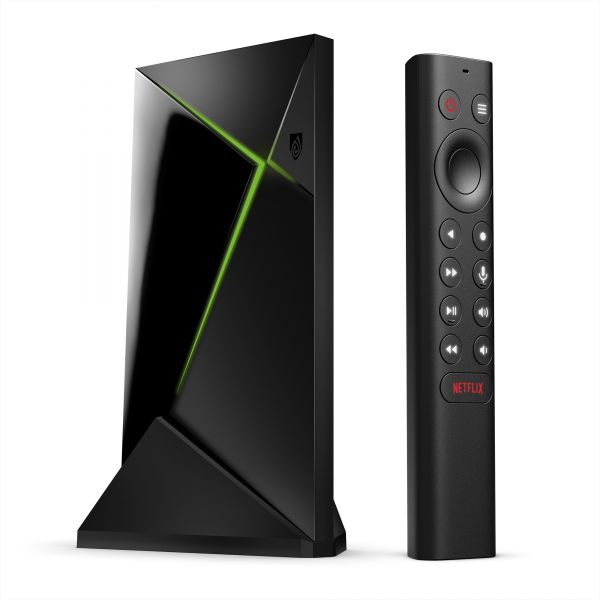 Much has been said already in countless reviews over the past 5 years ever since the first model came out. We know what the Shield TV is capable of and this new model is more refined, faster, more functional and with that really improved remote it cements its place as a great streaming player.

The NVIDIA Shield TV is perhaps not the best choice for everyone as there are cheaper offerings out there.
It is a premium 4K HDR/Dolby Vision streaming player, carrying a price tag that’s commensurate with its power and performance.
And for around AUD250 (cheaper when you do some scouting around of course) it is the right sort of money for value.

If you’re fastidious and want to have the highest level of detail in what you’re watching (particularly when watching HD content) you won’t regret your purchase.

Have a look at the Nvidia site here.