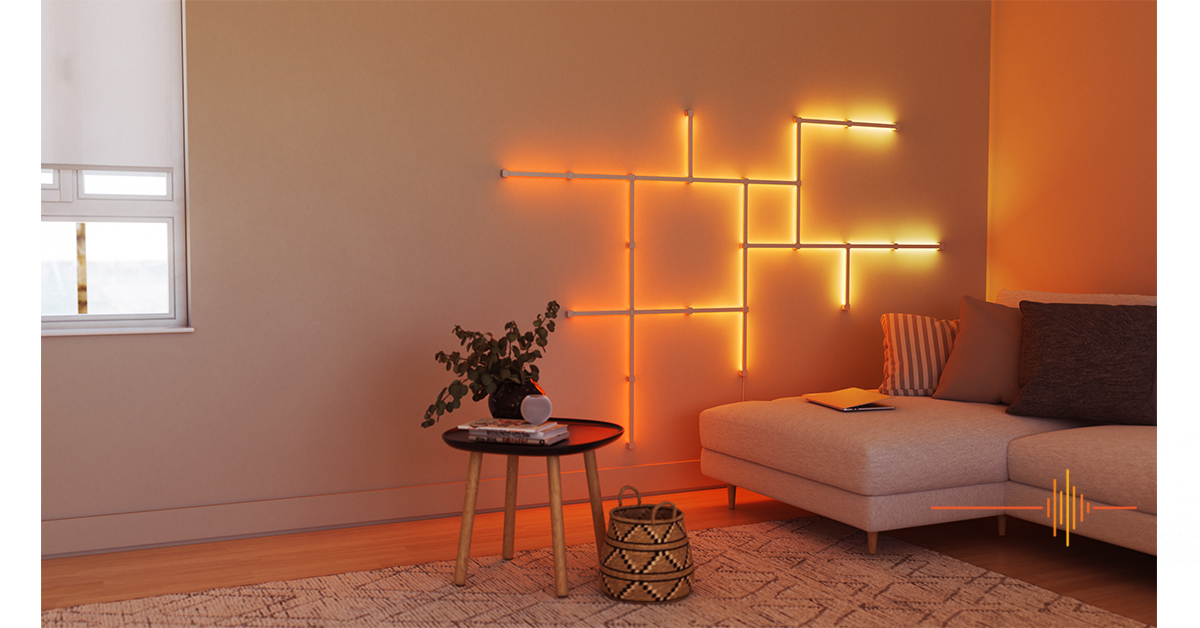 Driving around one night, my step-son pointed out the RGB lights leaking through random windows – a beacon to those in the know that it is a teenager’s room.

Our Chief Unboxing Officer is getting a say on redecorating his room now that he is about to start high school. As befitting someone on the cusp of becoming a teenager, Nanoleaf has sent us some Lines Squared to play with. 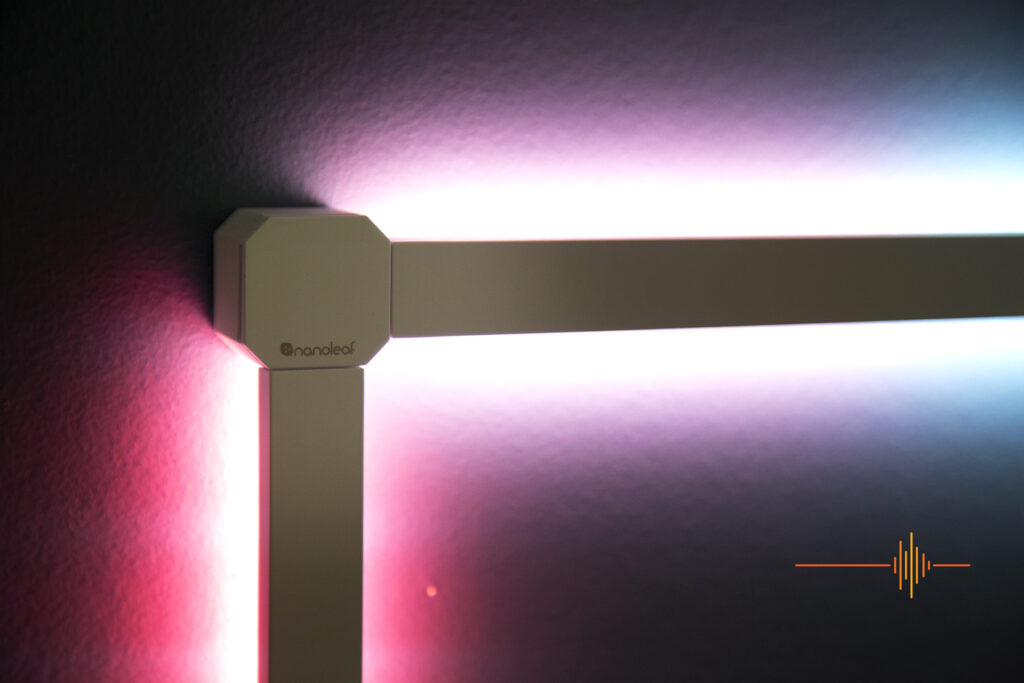 We are no strangers here at DRN to the Nanoleaf family. I have previously reviewed the Elements which is a lovely feature piece to have on my lounge and dining room wall. Peter has the Nanoleaf Lines backed to his gaming rig. Lis has just decked her lounge with the Limited Edition Ultra Black Triangles. So when I broke the news to Liam, he was super excited to think about the possibilities.

The Nanoleaf Lines Squared are essentially the Nanoleaf Lines, they share the same 28cm length white LED bars and connecting ends. The difference is that the Lines Squared comes with connectors that are at 90 degrees to form right angled shapes. This allows you to create squares, rectangles, right angles; rather than triangles, diamonds and rhomboids with the 60 degrees angle connectors.

Taking off the glossy sleeve of the Nanoleaf packaging, the parts list is packed efficiently and extremely well. The four LED bars sits in a stack in the middle of the box, with fours caps on top and four connectors below.

Under the tray are the processor and the power brick, with a generous length of wire to get you to the power point.

The LED bars are lightweight and with good build quality. They don’t feel like they will damage easily but let’s be sensible, these are no lightsabers and I don’t image that they can take a beating if you decide to wield them around like a Jedi Master. 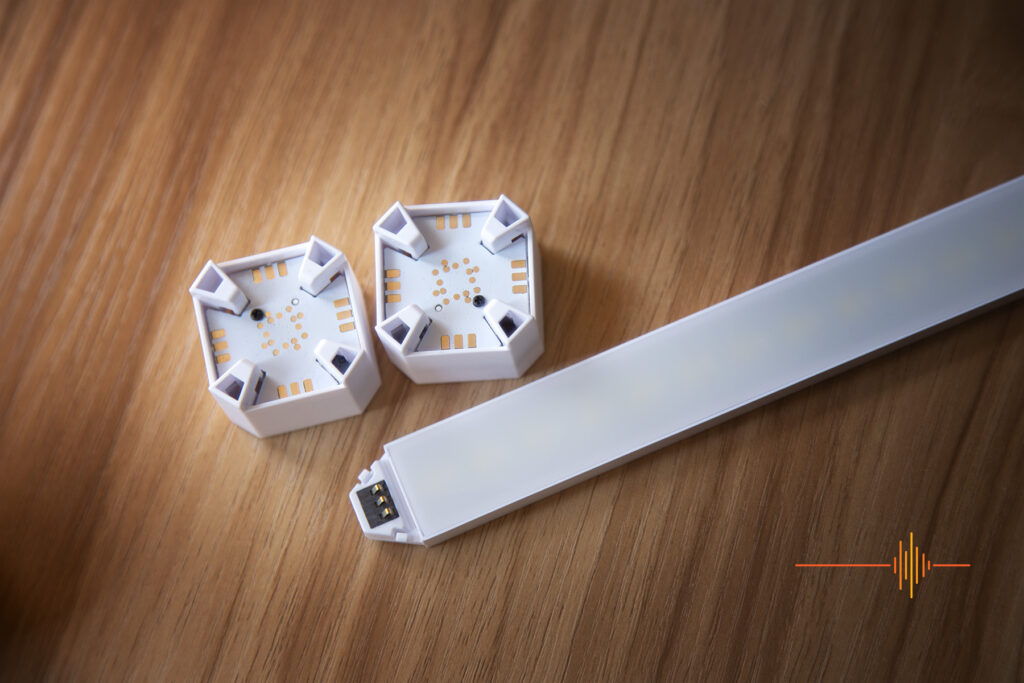 With thanks to Nanoleaf we got to work with the Starter Kit (four lines) and an Expansion Pack (three lines), giving us a total of 7 light lines to work with.

It took a little while for Liam to settle on a design. That said, you can always change them around as long as you have some double sided tape to work with. He settled with an incomplete box design which works really well around his bunk bed.

It took me less than ten minutes to get the Lines Squared mounted on his wall, 3 of those was checking in with him to make sure I understood exactly what he wanted.

While you don’t need any tools to put the Nanoleaf up, it is recommended to grab a spirit level to ensure it does not end up looking wonky. There is some wiggle room at the connectors so the level comes in very handy at this point.

There is one special connector with the power cable hard wired in. It doesn’t matter where it is placed in the design but logic dictates it should be closer to the power point, and out of the way so it does not look unsightly with the design. This is probably the biggest challenge when setting up your Nanoleafs, how do you work the power cable so it is not distracting from the feature? You can wire it behind the wall if you have the gumption to do so, and know that your installation and design is pretty permanent.

There is also one master cap which has buttons to control the Lines manually. Again it can be on any connector but it should be placed where it is accessible. In my case I put it within reach of Liam for when he is in bed and well away from his devices.

Lastly there is a cover with the Nanoleaf logo printed on it discreetly to complete the design. 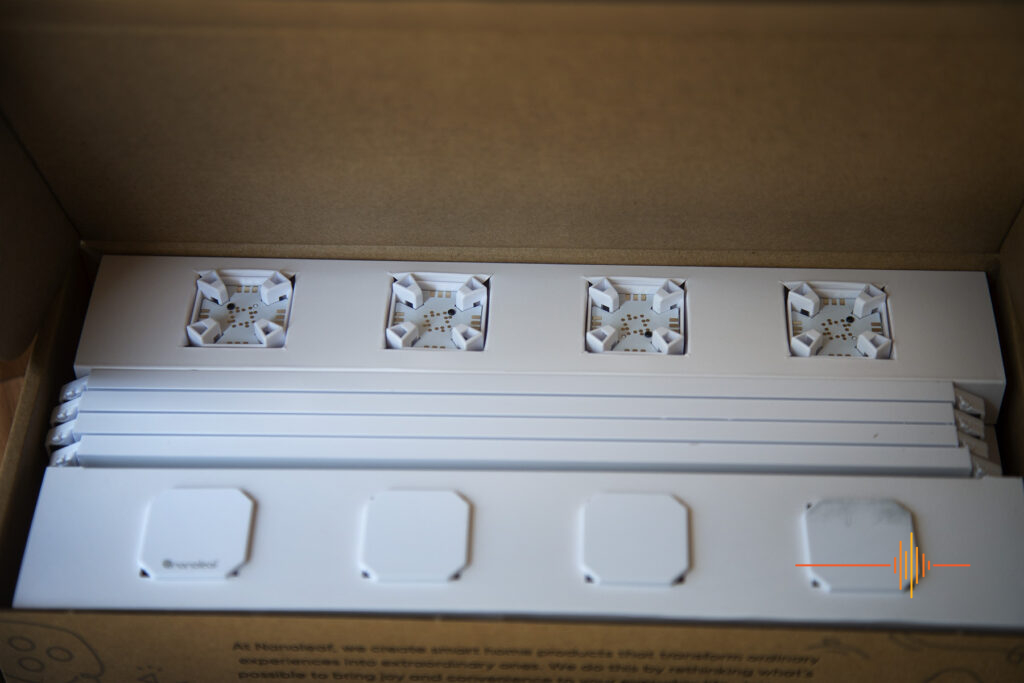 You could say at this point your Nanoleaf Lines Squared are ready to go, and it is. The physical control module will allow you to do everything if not overly elegantly.

Of course to take advantage of all the features you need the Nanoleaf app and to pair the device with it. When I first tried the Elements, the pairing process did my head in and lessons were learnt. So the first thing now I do is turn off the ad blocker on my phone before proceeding. Actually I lie, it was the second thing I did after I went wrong on the first go.

Once I remembered that little tip (and factory reset the Nanoleaf), pairing it to the app went straight through without dramas. I did have concerns with a mesh system that does not allow me to turn off 5 Ghz but those worries were unfounded. Looks like Nanoleaf has improved their pairing experience and to check that I didn’t fluke it, I did the same with the Elements which I have left offline since a router change, and it worked without a hitch.

With access to 16 million colours, two vibrant colour zones per line and diffused lighting, you will find a scene for any mood. Music integration comes part and parcel of the Lines Squared, and your favourite playlists can also be a feast for the eyes as well.

Because the Lines are offset from the wall by design to allow light to be diffused by reflection, the light you do see if softer and less harsh overall. It can make for a more flattering light if you are using it for video calls, or even to help you focus on the more important things on your plate. 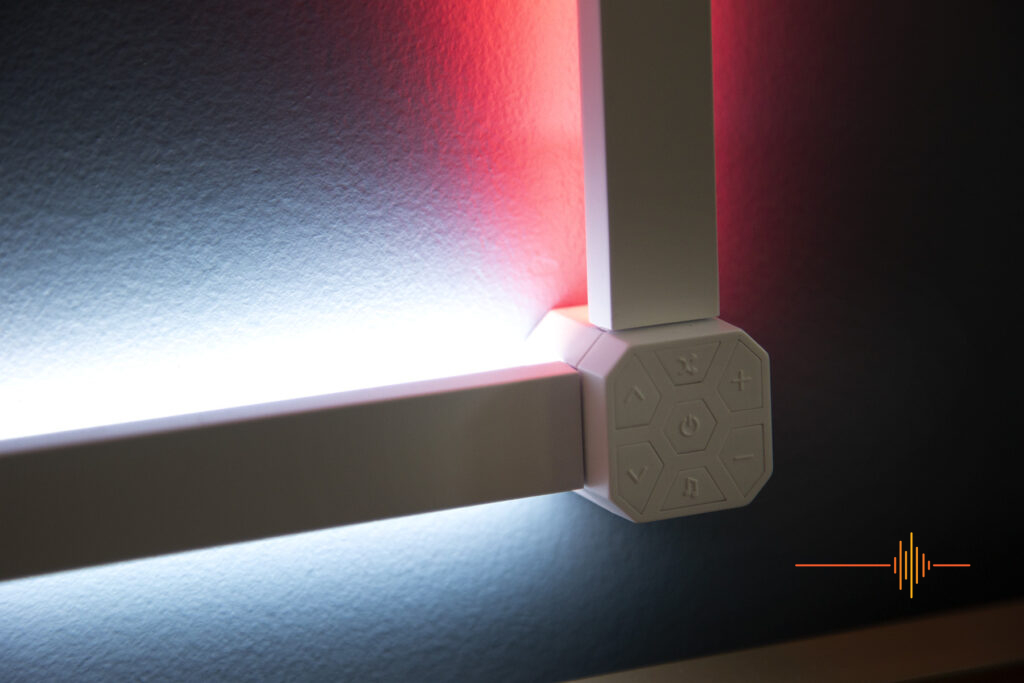 For me they make a great night light for Liam. The closer proximity to him and the controls he has over the mood and intensity seems to give him a level of comfort that makes him feel more secure. At the dimmest level of brightness it is more than enough for the purpose. We have it on a scheduler so that it turns itself on some 15 minutes before bed time, and turns off just after sunrise. This unfortunately though is done on a manual time schedule, not an automated routine where it figures out sunrise.

Going forward though with a reconfiguration of his room, we will be able to use the Lines to light up his study desk area. This will also then also open up the ability to use the Nanoleaf software to control the lights from his computer and take advantage of the Screen Mirror feature. Screen Mirror can sync the colours from the screen to the Lines and create an immersive gaming or movie night experience. 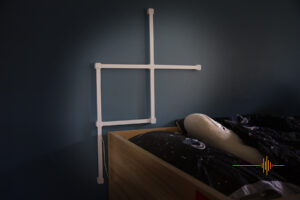 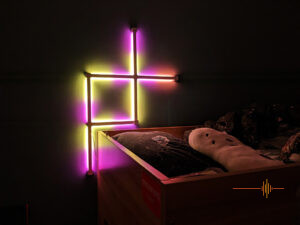 You can see the Nanoleaf Squared Lines in action in this video.

The Nanoleaf products don’t work in isolation, with a good amount of smart home integration available.

At the top of the lists are of course, Apple HomeKit, Google Assistant and Amazon Alexa. These are no brainers to have onboard although some products notably don’t have HomeKit listed.

More useful and versatile is the support for Razer Chroma, Corsair, IFTT, SmartThings, Flic and Engine DJ. The first two will allow you to leverage the Lines to sync with other RGB peripherals. It is all part of being able to create a customised immersive experience that reacts to what you are doing. It’s great to see cross company integration rather than building silos.

There is Thread support which has been in Nanoleaf devices for a while. It allows all Thread-enabled devices to speak the same language to create a reliable self-reinforcing mesh network.

Also of interest is Nanoleaf’s push to for Matter compatibility starting in 2023. Whilst this is not relevant to the Lines review here, it is notable that Nanoleaf is intending to integrate new standards to ensure compatibility with other manufactures for a seamless experience.

And hot off the press from CES 2023, Matter compatibility will be a software update for the Lines family coming this year. 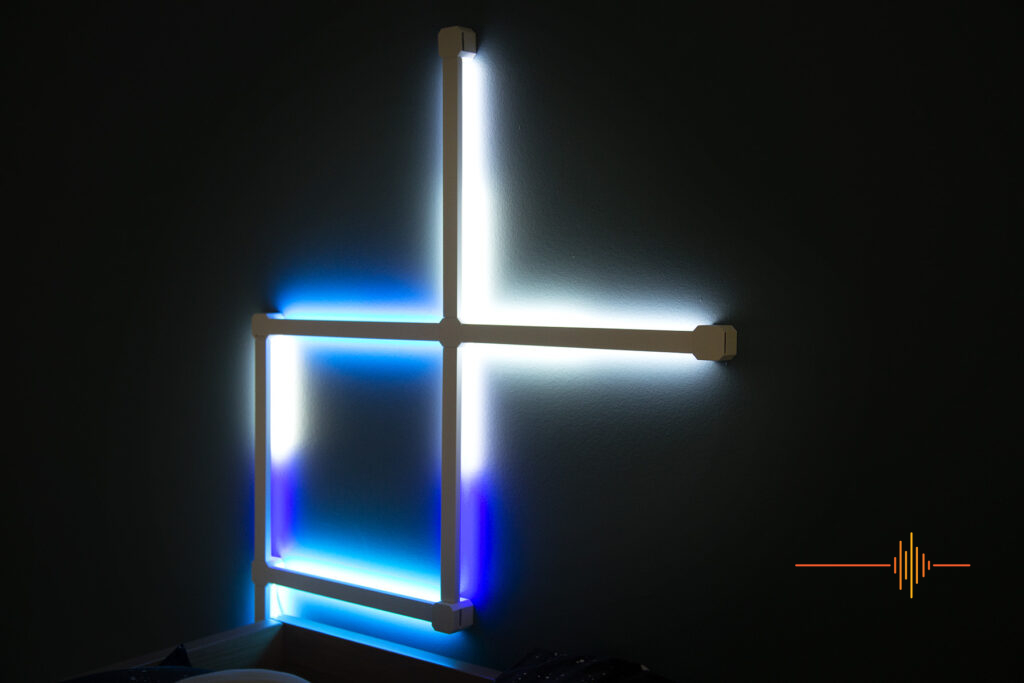 Controlling the Lines can be done via the mobile App, or a desktop application.

The mobile app provides nineteen built-in scenes, option for you to create your very own or download from the Nanoleaf community.

Reflected light is what the Lines offers, so it is understandable that the light bars are offset from the wall.

The connectors raises the bars about 17mm off from the wall, which means don’t be tempted on lean on them if they are within reach.

Unlike the panels, these do not have touch control. 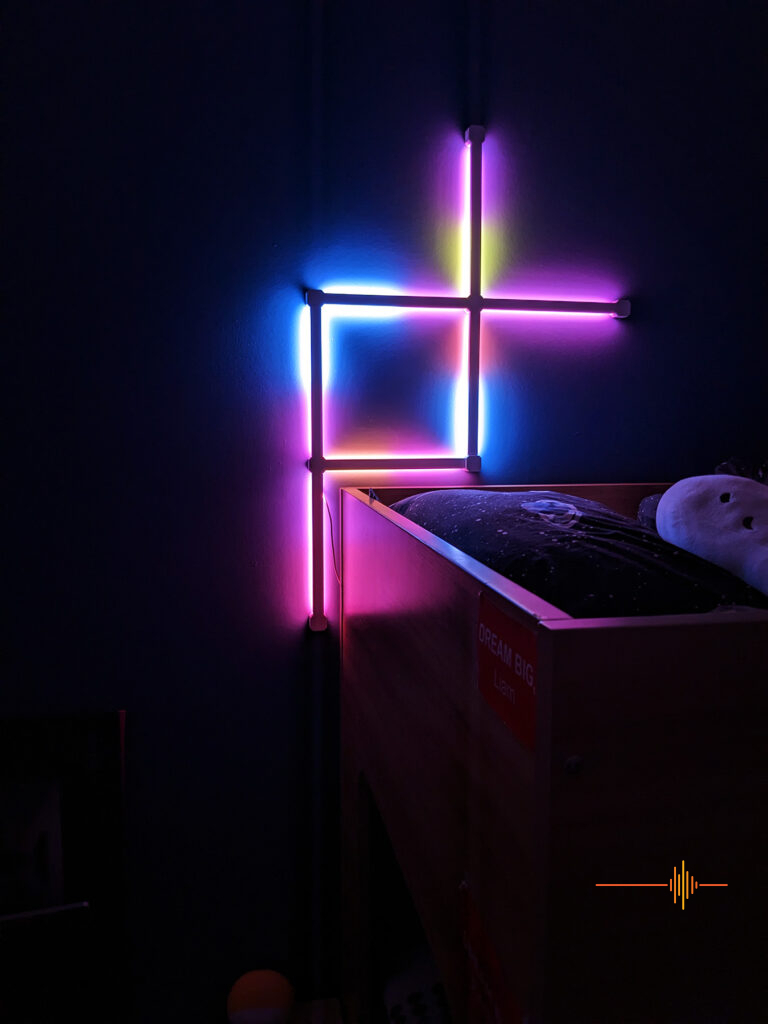 Nanoleafs are the ultimate in expressing your creativity. You can mix and match your standard Lines and Lines Square connectors to further your designs.

There are accessories such as matte black and matte pink skins to put over your white line bars, nothing that the covers are only available in the hex shape at this point. Additionally there are flex connectors to go around corners although these are at the moment limited to Lines’ hexagon connectors only as well.

The Starter Kit comes with four lines and Squared connectors and has a RRP of AUD $229.99, the expansion pack has three lines and connectors with an RRP of AUD $99.99. Both are on discount at time of publishing for $183.99 and $79.99 respectively.

DRN would like to thank Nanoleaf for providing the review units. 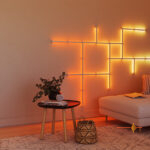 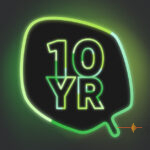