Sometimes it is just nice to revisit a golden oldie… But in this case we are talking about a smartwatch that hit the shelves less than a year ago: the Samsung Gear S.

When it came out I was stunned at the supremely curved display and the fact that you can use it with its own Sim card.

Beauty is in the eye of the beholder and nothing is as subjective as the watch you wear.
I have an elegant dress watch but normally at home I do not wear a watch at all. Would the Gear S convince me to wear a watch all the time?

Main Features
Having its own Sim card means that you can take calls independently of your smart phone as well is making phone calls, à la Dick Tracy style.
This undercover way of talking into your sleeve may seem attractive but the novelty wears off quite quickly and it does look a bit stupid. For a quick call it’s okay but you don’t want to be chatting more than five minutes holding up your arm!

The very large curved AMOLED display with its sensitive touchscreen makes it very easy to operate. Just slide up and down or left and right from the clock home screen to get to the various apps and notifications.
It is quite handy to not have to take out your phone from your pocket just to see who is calling or what the message is about. It can be done quite unobtrusively as long as you don’t mind wearing an ostentatious phone that masquerades as a smartwatch on your wrist! My, it is big….

Of course it has a built-in accelerometer, gyroscope, compass and heart rate monitor. All it lacks is a blood pressure monitor to keep tap on your health!
In order to make use of the Gear S with its proprietary Tizen operating system you not only need to be married into the Samsung family but you have to have a device from the Galaxy clan as well.

The Bluetooth connection makes pairing to your device quite easy and if you wear a Bluetooth headset to listen to music you’re all set to go.
Samsung’s S Voice technology makes dictating probably the best way of inputting your text rather than using the tiny on-screen keyboard.

The plastic strap has one of the best clasps I have ever used but a leather strap would have been preferable.

Battery Life
Initially the battery life of almost 2 days was touted as a great thing but I have a struggle with getting through the day with just the watch’s inbuilt battery alone.

It does come with a backup battery module that clicks on the back of the smartwatch through which you can charge both the phone and that battery. Even though that module is quite large it only charges an empty watch battery up to the 60 % level. 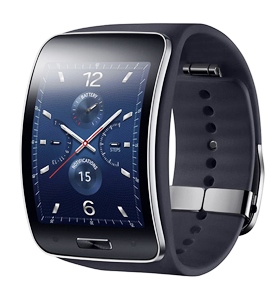 Conclusion
The Samsung Gear S is smart -looking in an ostentatious way. It is beautifully designed, easy to work with, a reasonable battery life but for most people it will be just too big!
Even though it’s about a year old now it still holds much of its value on the market which is quite surprising (on eBay around the 400 bucks).Considering that it is essentially a notification display rather than a full-fledged mobile phone device in practise, I would put my money in something that looks like a regular watch with about the same functionality.

I must say that I do like that massive standard clock display but you can’t have that on all the time because it just sucks the battery life to the point where you need to be juicing up several times a day. For a good idea what else is out there and to check out the Gear S2 for not much more money, have a look here.