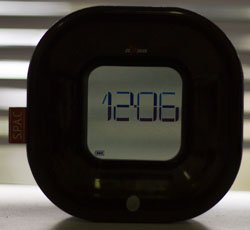 Given the choice what would be your ideal way of waking up to face a new day?  For me it would be a gentle wake up curled up next to my wife, my body rhythm tells me that I have put sufficient deposit into my sleep bank.  I jumped at the chance to review the aXbo Sleep Phase Alarm Clock, billed as the revolutionary waking system to waking gently at the right moment when you’re already almost awake.

With thanks to aXbo for supplying the review unit and their patience, let’s see just how the aXbo performs.

First Impressions
Without doubt, the aXbo has got to be the most stylish alarm clock I have had the pleasure of laying my hands on.  The unit is all gorgeous curved corners, shiny black front and back with a sunken transparent screen in the centre of the “donut”.  The edge of the aXbo is wrapped with a matte silver strip broken by a single combined wheel / button embedded between two buttons that is defined only by perforations.  In designer chic style, a small orange rubber tag on the front left edge of the unit spells SPAC (Sleep Phase Alarm Clock).

The transparent LCD window displays the time by default, and serves as the interface to setting up the aXbo.  When the screen is active the screen emits a beautiful blue light that is of just the right intensity even when viewed in the dark.

A good sized “grill” on the left side of the unit is the speaker for the alarm clock.  A small bayonet port in the back of the unit serves double duty as the charging port and USB interface to a computer.  Helpfully the supplied charger is USB port enabled.

In addition to the aXbo main unit, a terrycloth wristband with a removable sensor is essential for the system to work correctly.  The wristband is gray with the aXbo logo embroidered on them and has a slot for inserting the sensor.  With this particular review unit, a single sensor was included.

In its main function, the aXbo aims to wake you up every morning within the optimal period when your biorhythm is in stage 1 theta sleep.  What it tries to avoid doing, is shocking you out of a delta sleep state.  The sensor in the wristband detects motion associated with a light sleep phase within the 30 minute window before the wake up time and plays an ascending sound to gently wake you up.

In Action
Good looks and theory aside, the burning question is does the aXbo work as intended?  This review has taken some time to bring to fruition.

Despite the minimal number of buttons, I have to admit that the aXbo is pretty intuitive to use.  The scroll wheel is responsible for menu navigation and changing settings.  The other buttons confirms setting choice or return to the previous menu level.

My intention with the aXbo is to assist my wife with waking up in the morning, and hoped the aXbo with its sensors would do the job.  For starters though, she balked at the idea of wearing the wristband to sleep but did give it a go for a few nights.  While the aXbo did its job of waking her up within the 30 minute window, it did not give her the willpower to get out of bed particularly when she considers the few extra minutes of sleep she could be getting.

We swapped over to me using the aXbo instead and for her to revert to a standard alarm clock.  I was also not hugely keen on wearing a wristband to bed but given my previous life of hiking and travelling, it is another thing I adapt to and forget about quickly.  The end result was that when her alarm goes off, I “wake up” to roll over at which stage the aXbo considers me in theta stage and chirps its alarm sound.

The wristband sensor has a single multi-purpose button that to snooze (firmware update was required) as well as activate the blue backlight.

I tried to persist with the aXbo but in the end it was actually making things worse in my situation than helping.  With the (fairly) recent addition to the family, the aXbo was abandoned in favourite of the biological alarm clock called baby and my smart phone.

To ensure fairness, I passed the aXbo unit to a good friend and colleague of mine.  I did not tell him of my experiences and allowed him use it without preconceptions.  His conclusion matches mine as his wife needs to wake up before he does.

Aside from the morning wake up call, the SPAC has a Powernap function designed to help maximise your powernaps.  When the function is activated, it monitors your movements in the next 30 minutes and attempts to wake you up in a light sleep phase.

The Chillout Sound function will play relaxing nature sounds until the unit detects you are asleep.
A recent addition to the aXbo via firmware update is the iSnooze function.  The iSnooze function gives you a once off snooze function for 30 minutes after the initial wake up call.  The second wake up is again governed by the theta sleep state.  In the event that you do not fall back asleep after the initial wake up, the aXbo will sound the alarm after 5 minutes to encourage you to get up.

The aXbo is capable of monitoring two sensors concurrently.  Each person can have their own alarm window and distinct alarm sound.

A full charge of the battery lasts around fourteen days, particularly useful for those pesky overnight power outages which would render most average alarm useless.  aXbo claims an intelligent charging system in which the unit will run off battery power until it is low before recharging, allowing you to leave the unit plugged it without impact to the battery longevity.  This feature is particularly handy when the battery is non-replaceable.
For a single user the unit will log sleep data for around 28 days, for two users the duration is halved.

The axBo Research software is available online after registration which permits the user to download their sleeping patterns and to upload additional sounds to the unit.  A separate piece of software handles firmware updates to the aXbo.

Gripes
As I understand it, the two sensor version of the aXbo functions in exactly the same manner – playing music to wake each user.  If one or both users are light sleepers then both will be woken up by the earliest set alarm. The aXbo does not differentiate between weekdays and weeknights.  The alarm setting is for one and all.  If you are the type who loves a sleep in on the weekend (who doesn’t?), then remember to turn off the aXbo before you go to bed.  If you happen to not put on the wristband, it will go directly to the last ditch wake up attempt at the preset moment.

The transparent LCD screen, whilst is a beautiful feature, is difficult to read if it is not placed in front of a light source such as a window.  There is also no option to enable to backlight to remain active constantly or at night, meaning that I could not read the time at night without pressing the button on the wristband, which leads me to my next gripe – the wristband button is basically impossible to press when one is wearing it.

The charging / USB port on the aXbo side is non-standard, necessitating yet another cable for another gadget.  As an interesting side note, the SPAC appears to have a serial interface inside the unit.

Lastly, the new iSnooze firmware which is in beta at the moment breaks the Powernap function.  At present there is no way of downgrading the firmware to resolve the issue.

I came away from testing of the aXbo with mixed feeling.  My initial desire for the aXbo was to assist my wife with a gentle wake up for work in the mornings, and selfishly allow myself to sleep in a little longer as she needs to get up earlier than me.  What eventuated was that I was wearing the aXbo wristband as she hates having it on overnight, and when she wakes up in the morning the aXbo detected my movement to roll over and it kicks in to wake me up.

The aXbo does not particular care about how much sleep I am actually getting or whether it is quality sleep.  Its programmed function is to detect when I am moving sufficiently to qualify to be in the theta state then bring me out of my sleep.  If I am going to bed at 3am and needing to be up at 7am, it will try to wake me up any time between 6.30 and 7am, by brute force standard alarm if necessary.

What I have determined is that the aXbo ignores all movements overnight until it is within the 30 minutes of the set wake up time, after which it interprets movements to be the natural biorhythm for light sleep cycle.  I do not know about anyone else, but aside from rolling over, I have been known to even answer complex questions coherently without ever coming close to waking up.

As a result, quite honestly the aXbo did not help me sleep any better. In some ways it made things worse by waking me up when I am not meant to due to its basic assumptions.  I do acknowledge however, that it will most likely work far better if I am sleeping alone making it ideal for when I am on a business trip.  For the asking price and the very rare occasions that I do business travels these days, there are many (far cheaper) alternatives available on smart phone platforms.

If your usage pattern fits what I believe is optimal for the aXbo, it is available here for the very princely sum of €199.00 with two sensors or €179.00 with one sensor.

Kids friendly bright colours, spare sensors, battery exchange as well as a travel pouch are all available online.  The cracked “special painting” finish version will set you back €249.00.  In essence there is no difference between any of the models available aside from the finish.