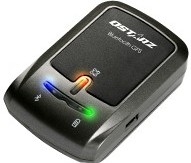 When Sean Lin of QSTARZ INTERNATIONAL CO., LTD. wrote to us to introduce his company and their line of MTK-based 32 Channel GPS receivers, we were kind of blasé about having to test yet another Bluetooth GPS receiver.
However, the Qstarz BT-Q810 was about as small a GPS receiver as I have ever seen and promised an astonishing 25 hours of autonomy.
Could this little number be as good as the best SiRFstarIII unit out there?

The package came quite complete with a car charger, a very small wall charger with an adapter for Australia (are we the only country that has slanted prongs?) and the usual quick start guide. Both chargers have a mini USB plug.
After an initial three-hour charge the unit was ready to go.

When I let my iPAQ 4700 discover the Qstarz it comes up as an iBT-GPS.
I have also seen it being marketed as an iBlue 737 and it seems we are talking about one and the same unit. 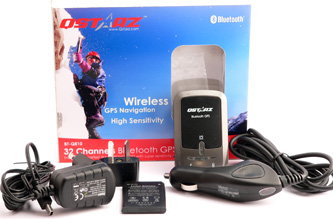 The Qstarz uses the MTK chipset which is possibly even more sensitive (rated at -158dBm) than the SiRFstarIII and in static tests around the office this was proven by excellent reception results, even metres from the nearest window.
Have a look at this screenshot which shows that we are still pulling in eight satellites while 5 m away from the nearest window. 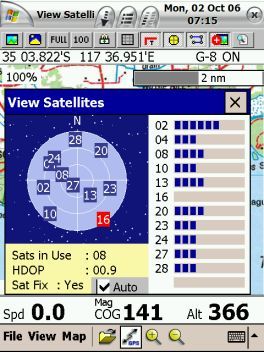 There was only one dead spot without any reception in the middle of the office but the result was extremely pleasing and far better than any other GPS receiver we have tested. What this means is that in the urban canyons of the big cities right down to the deep recesses of the parking garages this little number should hold a fix far better than just about any other receiver on the market.
Of course, we also tested it out on the road with our favourite OziExplorerCE program.
Again, no surprises here.

Battery life from the 1000mAh Lithium battery is promised to be an astonishing 25 hours, which in my book is a full day’s work.
Hey, even I need a break after 25 hours!
Reality check: the most I could get out of it was 16 hours before the red LED began to flash (battery low). I could eke another couple of hours out of it before I was back on charts and compass for my navigation…
All in all, 18 hours is quite respectable!

There is one gripe I have with most GPS receivers we’ve tested and that is the fact that the LEDs blink when they shouldn’t.
This is what I wrote when reviewing the Rikaline 6033:
“Here is happiness: the LEDs don’t blink when they’ve acquired satellites and established a Bluetooth connection! Why draw attention to the unit by blinking if everything is OK?”

That’s the way it should be, particularly if you fly or drive at night as these LEDs are quite powerful and distracting when you have them on your dash. An automatic light dimmer might be useful too for these night trips. 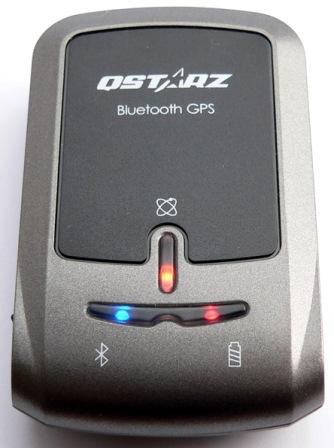 There’s a lot to like about the Qstarz BT-Q810 GPS Receiver.

PS the next GPS receiver we will review from Qstarz is their solar panel equipped model. In fact, Qstarz has an interesting line-up of products for our digital lifestyle and I’m sure that we will review more than just their GPS receivers in future.