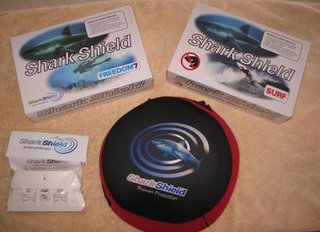 Let me start off by saying that if you had one of these, then the film “Jaws” probably couldn’t have been made.  It is the second generation Shark Shield extraordinaire, with a claimed shark exclusion zone of 6-8 metres diameter.

Do they work you say, well I should say YES with a big smile on my face as I borrowed a FREEDOM7 Shark Shield and went shooting fish at Cosy Corner near Albany Western Australia, only to be told later by my buddy, that half way through the dive and in the midst off stuffing a big “Queenie” in the catch bag, that a big white and grey shark had streaked down toward me,  “It got to within 5-6 metres of you, then gave an immense shiver, veered then departed as quickly as it came”. he said. (More about the White Pointer later.)

With my 40 years experience of swimming, snorkeling and scuba diving under all varieties of conditions, often in depths up to 60 metres and 15 km offshore and with a diversity of sharks, we won’t “pull any punches” as we test the first two models under a number of activities.

A physical assessment of the FREEDOM7 Shark Shield showed it to be lighter and smaller than any predecessor whilst also having an extended battery life of approximately 7 hrs. 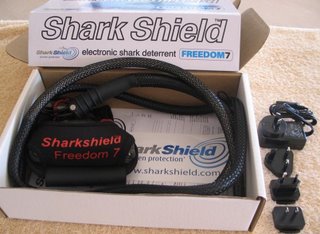 Let us start right at the beginning.  We charged it up and although it took a while we saw that as a positive thing because we felt the lithium battery would subsequently last significantly longer under a slow recharge system.  I assume this is why the FREEDOM7 Shark Shield’s battery will manage approximately 300 charges.

A blinking red light changing to green on the unit when fully charged, made it essentially fool proof to ensure that you sally forth into the depths with a fully charged battery.

Both my wife and I swam 2 km each per day for a week with no flippers and found that that whilst you knew it was on your ankle, it only caused a marginal slow down of speed. Much to our surprise, neither of us received any accidental electrical pulsing shocks from the unit despite swimming in heavy seas on some occasions.

Wearing the FREEDOM7 Shark Shield with flippers or Scuba gear, made you pretty much, forget it was there, apart from the fact that you feel one “hell of a lot” safer especially when swimming in deeper dirty water or on heavily overcast days.

We found it was reasonably difficult to see the green light (functioning correctly indicator) as you had to twist a bit to see it. – being younger or better positioning of the unit on the leg may help this and this can easily be at the wearer’s discretion because of the multi location Velcro fixing.

I found that by reaching down and putting my hand on the “snake” where it came out of the main unit, I could just feel the electric pulses.  Be aware though, that if you move your hand down the snake a little further, it will make you “buck a bit” for the electric impulses increase substantially.

I have not yet been able to convince the wife to try this method of checking for operation.

Unlike the Scuba test, we did not see any sharks, but can support the manufacturer’s claim that other fish are unaffected.

All in all we found the unit for swimming, snorkelling and scuba diving to be excellent to use.  It is light and easy to carry, easy to fix onto your leg, easy to swim with and very fit for purpose.

If we had any suggestions for improvement at all, it would be that there should be some sort of battery status indicator on the charging unit when you plug in for recharge.  This indicator would allow you to easily see whether you need to recharge or not as half charge on some occasions may be sufficient for your swim.

We kept recharging the unit after about 5 hrs of use, rather than let it go flat so at the time of writing this report we have yet to prove that its battery life is a full 7 hours. With regards to charging, it is impressive that included in the standard package are adapters to allow connection to other countries’ electrical mains supply systems.

As we did not prolong a test until battery failure was imminent, the claim by the manufactures that you get an audible and visual warning 10 minutes in advance before your “Heiny” is unprotected remains untested.  But hey, we believe what the  manufacturers claim as everything else they say about the Shark Shield has tested out to be a fact.


A physical comparison of the Shark Shield SURF against the FREEDOM7 Shark Shield found it to be purpose built for surf boarding with a specific mounting system, with fittings provided immediately fix unit to the surfboard.
Note that if you own two boards you will have to purchase another SURF mounting plate, so that you can then simply transfer the Shark Shield from board to board.
It comes with a 600mm longer but thinner and more flexible “snake” (antenna) but other properties such as the exclusion zone and technical data remain the same as the FREEDOM7 Shark Shield . 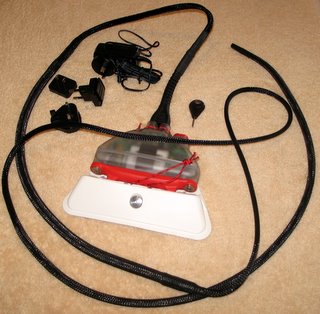 We found this Shark Shield performed as expected and with no surprises, easy to fit easy to surf with. Given the spate of shark attacks in Australian waters recently, including fatal encounters. ,all surfers should have one.

Our preliminary finding is that with a Shark Shield in place these attacks could probably have been avoided altogether. That was certainly my own experience and based on this I cannot recommend the Shark Shield products highly enough. Some people might suggest we do double blind testing: have two reviewers in a tank with sharks – one with a Shark Shield and the other without one…

Any takers? Didn’t think so…