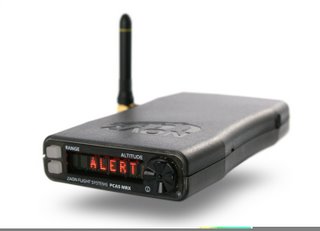 It’s a summary of our previously published series of reviews on PCAS units here on DigitalReviews.net and updated with the latest developments.

Yes, you may only relate to this if you’re interested in safety in the skies, whether as a pilot or passenger….

Greater Safety in the Skies

One of the greatest safety advances of the last few decades in aviation must be the Collision Avoidance Systems (TCAS II) installed in commercial airliners. They enable pilots to see who else is flying in their airspace so that they can avoid running into one another. Traffic alert systems, their cheaper cousins, are now available to all aircraft, including private airplanes, and today we will be reviewing the smallest and most affordable of these portable units, the Zaon MRX Portable Collision Avoidance System.
AVIATOR recently offered the opportunity to win one of these units by subscribing to the magazine so it’s very timely to have a look at this safety device that may well save your bacon one day.

Let’s first talk a bit about the technology as well as the capabilities and limitations of this PCAS system.
Being portable the MRX (and its more capable sibling, the XRX) fit easily on top of your dash. In fact, the MRX is only about the size of a deck of cards. Rubber feet or Velcro options make sure that the unit doesn’t slipslide away on the glare shield. The smoke-colour semi-translucent polycarbonate unit looks great, but also unobtrusive sitting in your line of sight.
The MRX runs on batteries but can also be directly powered from the ship which is a much better choice for longer flights.

The traffic detection is failsafe, meaning it will detect every transponder that is switched on within a 5 mile radius.  But there’s one big proviso you need to know.
The current generation of PCAS units are passive collision avoidance systems.  This means that detection depends on the interrogation of ground-based radar stations and/or active TCAS systems along your flight path.  Ground radar has a typical coverage of over 200 miles and aircraft-based TCAS II cover a bubble around them of some 100 miles, so there is not a lot of airspace where a PCAS doesn’t pick up any traffic.  That applies certainly to the USA but also to the more sparsely populated areas such as here in Australia where radar coverage is rather limited.
The software does not display traffic above FL220 as this is deemed to be not a factor for the majority of general aviation aircraft that would be in the market for this type of PCAS.  It also happens to be close to the upper certified level for our pressurised Centurion so I’m okay with that.

The MRX detects conflicting traffic within your bubble of airspace up to 5 miles away and within 5000’ of your altitude but you still have to swivel your head 360° to see where the threat is coming from. Nearby traffic could well be behind you and closing in. Most aircraft have a huge blind spot underneath, above and behind you and no matter how good someone’s scan is there is unseen traffic all around us.
The more sophisticated XRX also indicates where exactly you should look to detect the incoming traffic. They have a directional antenna array built in, enabling you to see from which 45° segment the threat is coming from. No nervous swivelling to spot the bogey which could upset your passengers.  Instead, you can impress them with your incredible eyesight: "You see that aircraft on our right?  He is about 5 miles out and heading straight for us!”
The bright screen of the MRX shows the target information of the most acute threat.  You will know instantly how far the other aircraft is, whether they are above or below you or cruising along at your altitude.  In addition, you have a trend indication to show whether they are climbing or descending relative to you.
Because aircraft change positions all the time it is critical that the MRX knows how to prioritise.  It does this on the basis of the axiom that collisions only occur at your altitude, so relative altitude is the determining factor here.
It takes into account also whether your own aircraft is climbing or descending and, when the threat changes and another aircraft comes closer, you will see the word – NEW — for a couple of seconds followed by the new information.

There are only a few buttons: power on/off, mute, and a five way directional pad for volume control, brightness and menu options.

The mute button will kill the beeps for the traffic advisories and alerts.  There’s also an audio cable to channel these alerts to your headset. You will still see the word ADVISORY which is accompanied by two beeps) or the word ALERT.

It depends very much on your range settings when these warnings are generated.  For instance if the range setting is 5.0 NM (the default) and the traffic is within 1 mile you will receive an Advisory at +/- 1000 ft and an Alert at +/- 700 ft.

We tested the MRX on a few flights in the Perth, Western Australia, airspace.

Jandakot as Australia’s busiest GA airport is only a few miles from Perth International.

Air Traffic Control and Towers will only give you the barest minimum of info on conflicting traffic so the timely alerts from the MRX enable you to be ahead of the game all the time.

For comparison we also had the Zaon XRX along on the co-pilot’s side. The Alerts and Advisories were very consistent on both displays.

It can be disconcerting at first to discover how much traffic there really is that you would normally be oblivious to, particularly if the other aircraft are still too far away to be spotted. I would recommend setting the range at 3 miles for these crowded areas.

“Watching your six” has never been easier.  If you ever wanted to have an extra pair of eyes when flying, the current generation of PCAS units provide exactly that.

Whilst they can never replace the Mark I eyeballs, they can detect and track traffic before you’re able to spot them.

The MRX is the ultimate in really portable traffic detection systems for aviators on a budget.  These products are a pilot’s best friend in busy airspace.

Priced at less than $700 bucks it is a no-brainer to order one right now and make flying for you and your passengers much safer.

For more info on the MRX and Zaon’s other products and accessories have a look at www.ZaonFlight.com.

You can also browse my website, www.DigitalReviews.net and check out our earlier write-ups on PCAS technology. We would recommend reading these reviews as well since there is a lot of background material and schematics on how it all works that I did not repeat in this short review.