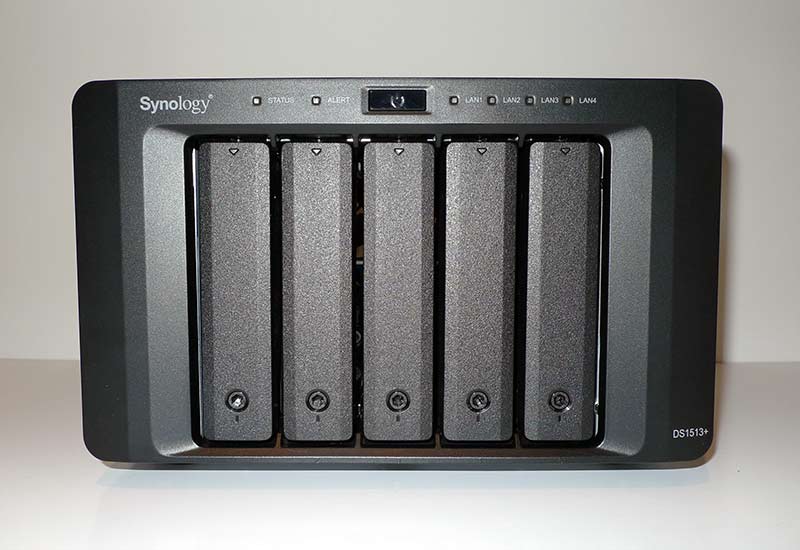 Time stops for no man – especially if that man is developing NAS devices down at Synology. It wasn’t all that long ago that we took a look at the five bay DS1511+ and even less long ago when Kevin Cheng gave us a photographer’s view of the DS1512+. Fast forward four months and now we have the brand new DS1513+ on our review bench.

Compared to its previous iteration, the DS1513+ has had some minor but welcome upgrades, including a doubling of onboard RAM to 2GB and two additional Gigabit LAN ports. Synology also lists a 3 dB(A) reduction in operating noise and curiously, a doubling of the amount of maximum shared folders.

The only regress is a slight increase in power consumption which has risen a few Watts to 51W during disk access and 25.7W while the hard drives are in hibernation. 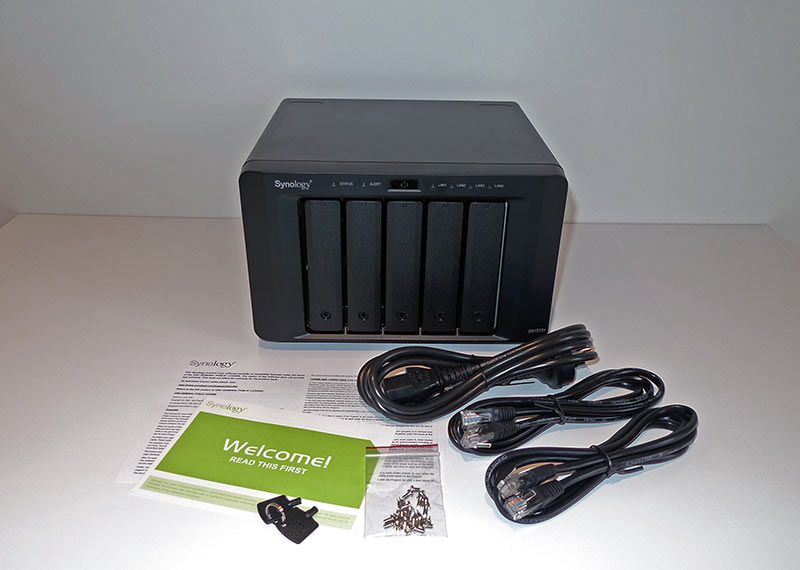 Beyond the DS1513+ itself, Synology bundles two CAT5E Ethernet cables, a small bag of screws, a perfunctory warranty sheet and a set of drive bay keys. Also included in our package was an Australian three prong power cable and a small welcome booklet. While some may lambast Synology for no longer offering the Disk Station Manager software on CD, most users of the DS1513+ will know that by the time a CD is printed, a newer version of the software will likely be available online. And I guess it’s environmentally responsible, too.

As we removed the unit from its packaging we noticed that Synology has moved away from the piano black of the DS1511+ and DS1512+ and instead gone with the more industrial look of the DS1812+’s matt black finish. Another design cue taken from the DS1812+ is the centrally located power button.

To the right of the power button are four LED indicators, one for each of the rear Gigabit LAN ports and to the left are two LEDs, indicating power and status respectively. Beneath these LEDs are the familiar five lockable hard drive bays. 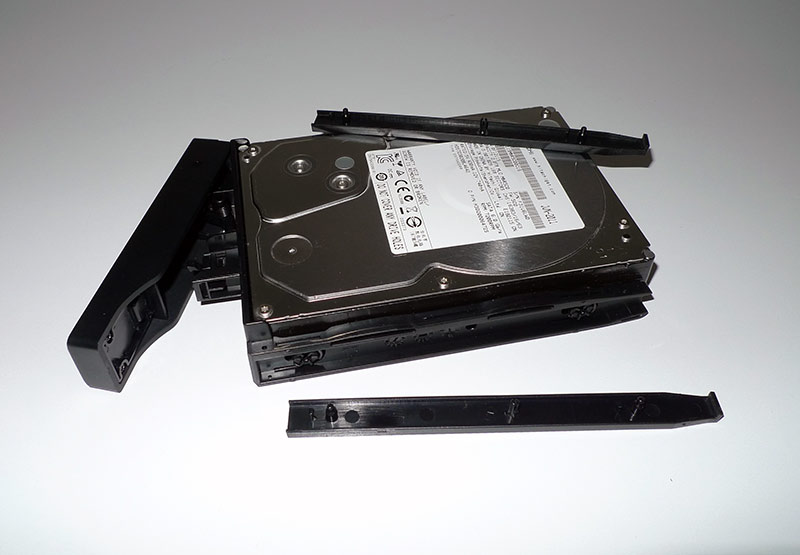 Like the previous models, the DS1513+ has a large Synology logo on each side which doubles as passive venting but predictably it is the rear of the unit that is more interesting. Dominating this face are two large (and user serviceable exhaust fans) with two USB 3.0 ports and two eSATA ports beneath. To the right are another four USB 2.0 ports as well as four Gigabit Ethernet ports and a small reset button.

On the far right is the power receptacle and a small opening for a kensington lock – Are we paying attention, Apple?

Considering the DS1513+ works perfectly using just one port, the four Ethernet ports may seem excessive to the average home user. In an enterprise environment however, these ports can be used to balance load, increase link redundancy and improve overall network performance.

Synology ships their NAS devices sans drives, so the first thing we did was hunt around for some winchesters. Having found the same three 500GB drives we used in the DS1511+ review, we ejected the drive bay caddies and began slotting them in. 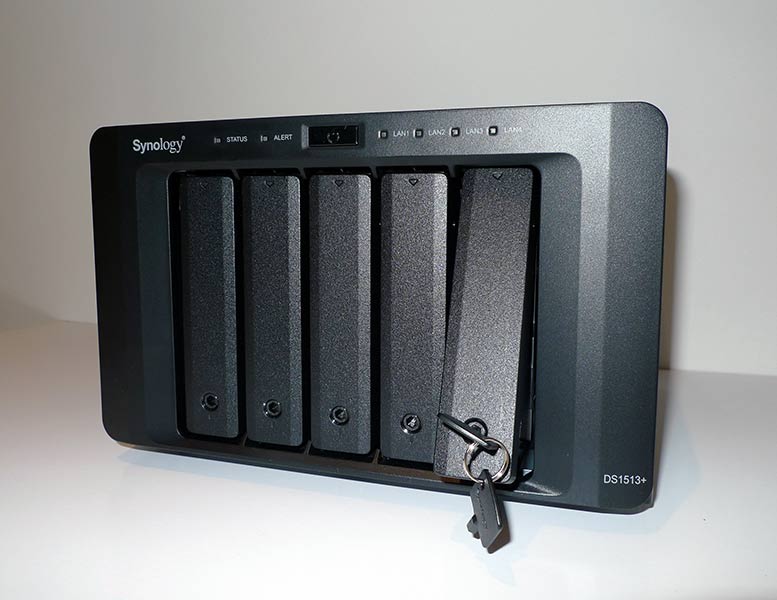 Unlike the previously reviewed units, Synology has employed a new screwless caddy system in the DS1513+. To secure 3.5″ hard drives into the new caddies, one simply unclicks the caddy’s two side panels, slides the hard drive in as per normal and then presses the panels back into place. Easy.

With the new click panels removed, hard drives can still be screwed into their caddies the old fashioned way but for what its worth, we found the new system to be quite secure and an overall improvement on the old screw in system.

It is worth noting that the hard drive caddies are also able to house 2.5″ drives, although due to their form factor, they are unable to take advantage of the new screwless system.

With three of the five drive bays populated, we connected the DS1513+ to our Gigabit network via CAT6 and fired her up. 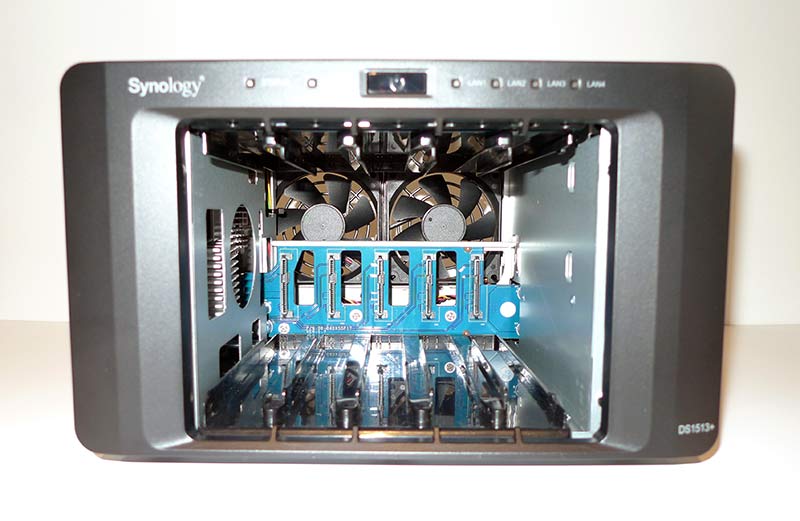 Clicking through the web assistant’s prompts had us downloading and installing the latest Disk Station Manager (DSM) software via the internet. While a CD used to be the preferred method of installation, Synology has gone the Apple Route and provided a direct over-the-internet download solution. And from what we can tell, it works fine, provided you have access to the internet, of course.

For testing purposes we had the DS1513+ create a “Synology Hybrid RAID” (SHR) from our three drives and set it off in motion. After just over twenty minutes our browser presented the DS1513+’s login screen heralding readiness.

After logging in we were greeted by the familiar “desktop inside a browser” DSM interface, along with an introductory set of instructional welcome message slides.

From the three 500GB drives, the DS1513+ created a single 908GB SHR volume with a one disk fault-tolerance, ready for use. Synology has a neat RAID calculator on its website to help get your head around how each RAID level (including its proprietary SHR) affects your available storage space/fault tolerance.

To gauge the DS1513+’s performance we undertook some basic speed tests using a standard set of dummy files from large (4-16GB) right down to folders containing copies of varying amounts of 1MB files. All tests were conducted to/from a Mac Mini running a 120GB SSD. Both the Mac Mini and the DS1513+ were connected via CAT6 via a HP Procurve switch.

We also used version 10.3.3 of the AJA System Test Utility and all timing was measured via stopwatch.

It is also worth noting that all tests were undertaken on a live network so the results may have been impacted by other network traffic: It doesn’t get much more real world that that.

On the whole, the results were better than those presented in the DS1511+ review and an accurate reflection of the upgraded hardware.

For general day to day usage testing, we setup the Synology as a basic file server, serving files to the ethernet connected Mac Mini and also to a mid 2011 MacBook Pro over a single wireless N hop. 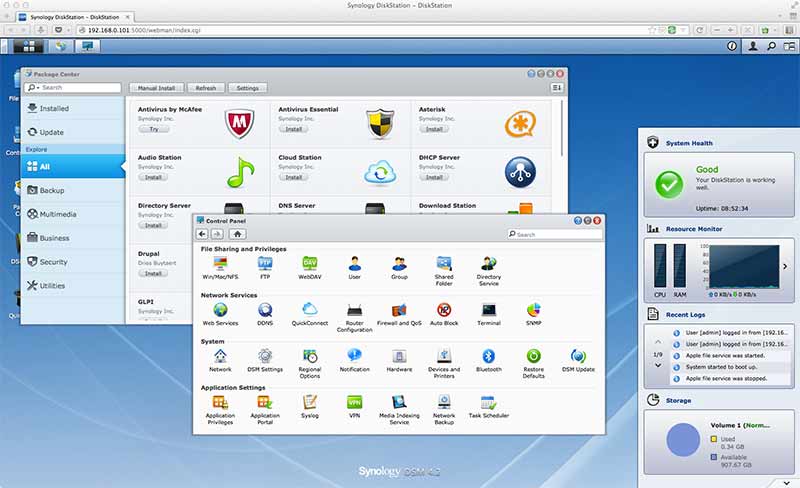 In our four weeks with the DS1513+, we had zero problems and general file sharing between the DS1513+ and our computers was smooth sailing. While we mainly used the Mac file sharing functions, we also dabbled in NFS for serving our media players which also proved flawless. Additionally, the DS1513+ is able to serve data via Windows and FTP network protocols.

Of course, like the previous Synology units reviewed, the DS1513+ is a whole lot more than just a file server. It has a veritable slew of features which are all accessible via the DSM software’s Package Center. Installing packages from the package centre is as simple as clicking an “install” button and not dissimilar from the Apple app store experience.

One of the additional packages is Synology’s Cloud Station which essentially uses the DS1513+ to create your own personal cloud storage. Another is Surveillance Station, which allows you to manage up to twenty IP cameras (a single camera licence is included). To this end, users can quickly increase the functionality of the DS1513+ to match their needs. 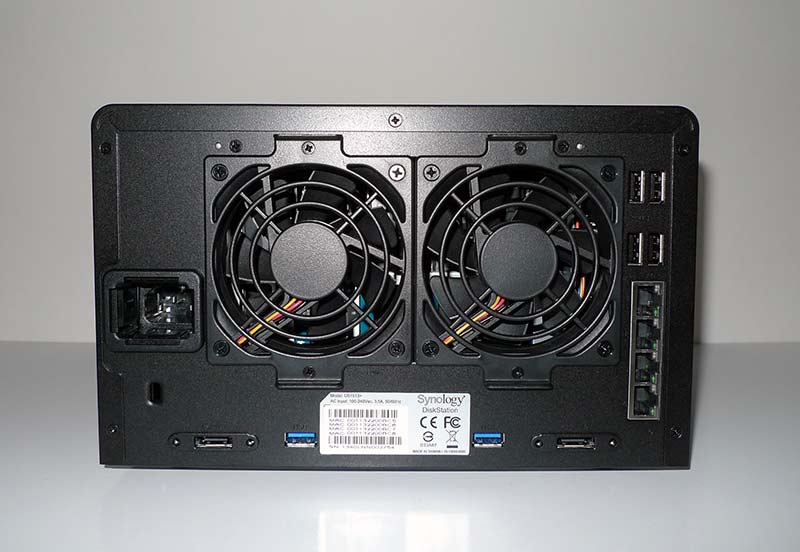 Beyond these installable packages, the DS1513+ has all the regular trappings of a high end NAS/RAID device such as user accounts, event logging, email notifications, VPN settings and a built in Media Indexing Service. And it is all configured through the Synology’s DSM web interface.

The DSM interface is excellent and anybody who has used a modern operating system will feel comfortable using Synology’s OS like GUI. Rather than describe it in great detail, we have included a screenshot and if you want to see why we like it so, you can test drive the latest iteration on their website.

While we played around with some of these additional packages, we literally only scratched the surface of what the DS1513+ is ultimately capable of. Worth noting is that all the packages tested worked well and while the use of some required more technical skill than others, the overall DSM experience was uniform throughout and the traditional NAS/RAID functions were all relatively easy to manage. 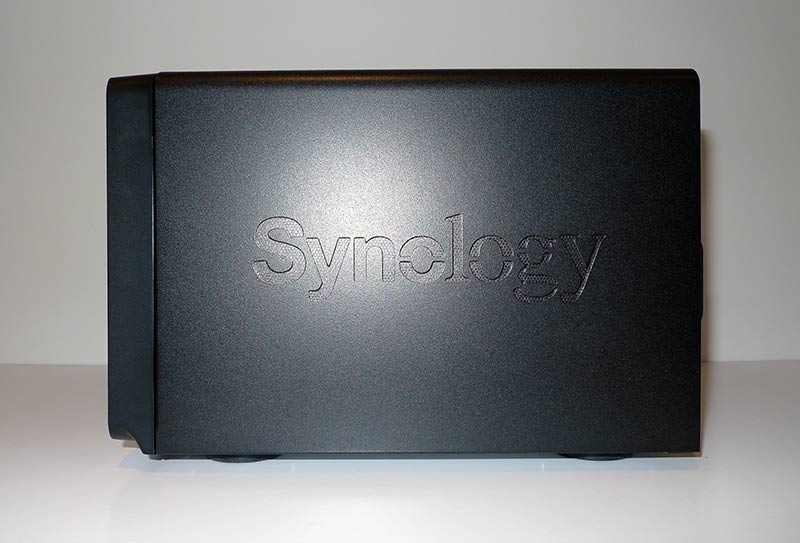 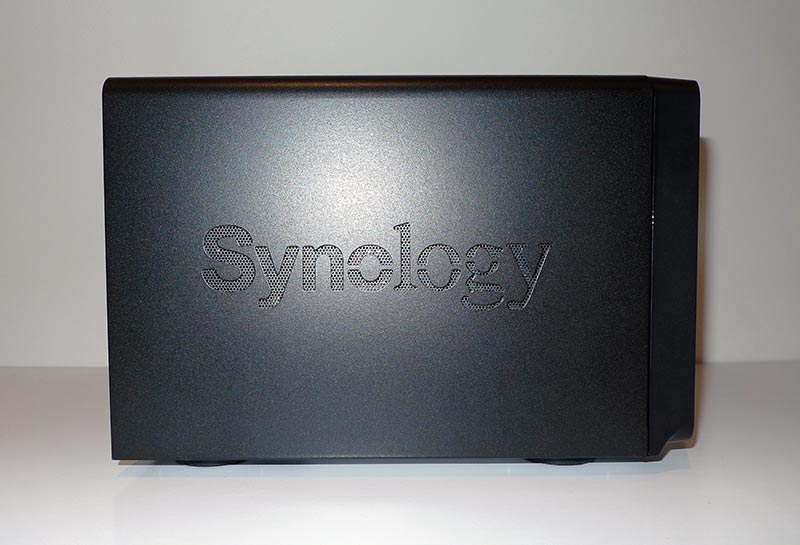 The ability to install the additional packages required to perform in a particular role makes the DS1513+ a highly flexible and useful device for many varied tasks both in a home and small business environment.

Overall, the DS1513+ is an excellent device in both what it can do and in how much raw data storage it can handle. In our time with the unit we found the DS1513+’s performance and reliability to be excellent and quite frankly found its ability to meet the requirements of so many different roles, staggering.

At current hard disk storage capacity, the DS1513+ can handle a maximum of 20TB of data in its five internal hard drive bays. Of course, if that isn’t enough storage space, the unit is able to control up to two slave five bay DX510 units for an additional 20TB (each).

And that’s not counting its two eSATA ports, two USB 3.0 ports and four USB 2.0 ports which can be used to connect not only more storage devices but printers too!

So if its massive amounts of storage or the ability to perform both simple and complex roles, the DS1513+ is a rock solid NAS/RAID option.

The DS1513+ is available now and can be purchased from computer hardware stockists around Australia for just under $900AU. For more information about the DS1513+ and other Synology products, please visit Synology’s website.

For purchasing a Synology product in Australia please visit Shopbot first to get the best price.